19 Best Songs about Cowboys – Time to Saddle Up! 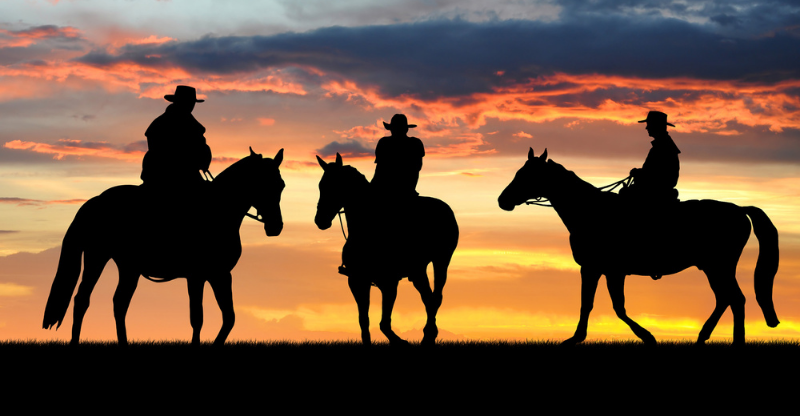 Cowboy culture is a worldwide phenomenon these days. Its epic stories, infectious music, and rebellious lifestyle has attracted countless individuals to it over the last few decades. From Clint Eastwood’s “spaghetti westerns” to the rodeo, droves of inspiration can be found in the way a cowboy lives his (or her) life.

No matter what part of the world you live in, the wild west isn’t too far away with this playlist of songs about cowboys.

Carrie Underwood warns single ladies about a deceitful man in her hit ‘Cowboy Casanova.’ With rock-inspired instrumentation and her commanding vocals at the forefront, she took a mainstream approach to the live production of this song about “a snake with blue eyes”. This single was part of her Storyteller tour show which featured backup dancers and choreography for the song’s performance.

Should’ve Been a Cowboy – Toby Keith

Keith took on the role of wannabe cowboy for this early single. The chorus of the song has the protagonist fantasizing about cattle drives and stealing hearts while he admits he “should have been a cowboy.” This song was featured as his debut single on his first album. It went on to become the most played country song in the 1990s.

Full of rich imagery and a drama-filled story, the lyrics to ‘El Paso’ read more like a movie script than a song. It was written while Marty Robbins was on vacation with his family traveling by car through the south west. While en route, he came up with a saga featuring a man who’s fallen in love. But when he sees his lover with another man, he shoots him dead and flees the scene. Take a listen and find out how this wild story ends.

Cowboy Take Me Away – The Chicks

The Chicks adopt a softer side than usual for their popular 90s song, ‘Cowboy Take Me Away.’ With classic harmonies, clean fiddle riffs, and a catchy chorus, The Chicks scored another hit with this song from their album, Fly, which debuted at number one on the Billboard charts in 1999.

Related: This one also features on our playlist of best country songs for karaoke.

Heralded as one of the Top 100 Western Songs of All Time by the Western Writers of America organization, this song warns mothers about the tough and often heartless lifestyle cowboys lead. Willie Nelson and Waylon Jennings covered this tune originally written by married songwriting duo Ed and Patsy Bruce on their 1970s collaboration album.

No list of cowboy songs is complete without this one. ‘Rhinestone Cowboy’ was a huge comeback hit for Glen Campbell, who recorded it at a time when his career had taken a nosedive. He wasn’t getting a lot of acting work and hadn’t had a number one hit in a while. When he heard this song, the story of a struggling musician trying to make it big, he recorded it right away.

It reached number one on several charts and won many awards and nominations, making it one of the most famous country songs ever made.

Related: Head on over to our playlist of songs with a profession in the title.

The Cowboy Rides Away – George Strait

Though this single was released in the mid-1980s, George Strait used it as his final song throughout his tours and named his final 2013-2014 tour after it as well. ‘The Cowboy Rides Away’ is about a cowboy finally giving up on a failed relationship and riding off into the sunset. Though Strait called it quits from touring in 2014, he quickly picked up a Las Vegas residency that is still going strong.

Related: See our top pick of songs about sunsets.

The Cowboy in Me – Tim McGraw

Recently featured as an acoustic song on the popular American drama series, Yellowstone, Tim McGraw sings about the cowboy way in this moving number. The country star sings about pain, regret, and overcoming hardships while giving a shoutout to cowgirls towards the end. An accomplished musician and actor, McGraw starred in the Yellowstone spinoff, 1883.

Related: Go to more classic songs about regretting something.

Where Have All the Cowboys Gone? – Paula Cole

Paula Cole stayed in the top 10 of popular MTV music show Total Request Live with her 90s tune, ‘Where Have All The Cowboys Gone?’ Her other hits include the award-winning single ‘Sonny Came Home,’ and her song ‘I Don’t Want to Wait’ which was the theme song to the popular teenage drama series, Dawson’s Creek.

Before country duo Big & Rich set themselves up to be a more serious country group with hits like ‘Lost In This Moment,’ they graced TVs on Saturday mornings during football pregame shows with their rowdy song, ‘Save A Horse (Ride A Cowboy).’ A tune about crazy cowboys and their pursuits of women, it has remained the duo’s most recognizable hit over the past couple of decades.

Bon Jovi relates the hard-living of being a rock musician to the life of a bandit-cowboy in their legendary song, ‘Wanted Dead or Alive.’ Singer Jon Bon Jovi sings about his “steel horse” and his “loaded six string” as he paints pictures of the towns they roll through while on tour. Just like cowboys, they only stay for a little while. Once their job is done, they are on their way to the next town.

This moody ballad finds country songstress Kacey Musgraves reflecting on a failed relationship between her and her man who’s run off. She sings “I ain’t gonna fence you in” during the chorus while she comes to terms with his leaving. It is speculated that Musgraves former marriage to fellow country songwriter Ruston Kelly served as inspiration for this tune. The title is a nod to Steve Miller Band’s hit song by the same name.

I Wanna Be a Cowboy – Boys Don’t Cry

The allure of the cowboy lifestyle crosses the pond with British pop-rock band Boys Don’t Cry and their mid-80s track, ‘I Wanna Be a Cowboy.’ The band spent the night before a recording session watching Clint Eastwood movies, and were so inspired they wrote the song in an hour. Though it charted well in other countries like New Zealand, Australia, and the US, it didn’t gain much traction on their home turf.

Jon Pardi is known in the country music industry for releasing good, old-fashioned country drinkin’ songs. He shows a more vulnerable side with his single, ‘Ain’t Always The Cowboy.’ Flipping the script of the traditional cowboy song, he sings of a cowgirl he’s in love with who’s “got no settle down in her boots.”

With an epic feel that transitions from softer acoustic, country tones to hard rock production throughout the song, ‘Cowboy Song’ tells the tale of the adventures a cowboy faces as he makes his way across the United States. It is a fan-favorite single among supporters of the band and has been covered many times by groups such as hard rock band Anthrax.

I Want to Be a Cowboy’s Sweetheart – Patsy Montana

A rare female star in the early days of country music, Patsy Montana released ‘I Want to Be a Cowboy’s Sweetheart’ in 1935 and the track went on to be the first million-dollar single by a female country artist. Before reaching fame within the country music industry, Montana went by her real name, Ruby Blevins, and was well-known in the Texas area as a yodeling cowgirl. In the late 90s, country singer LeAnn Rimes covered her own version of Montana’s hit song.

Musician Michael Martin Murphey educates the listener on what ‘Cowboy Logic’ is in this country tune. From spending money before it “burns a hole” in your pocket to treating his lady like a queen, there’s a specific set of rules cowboys are keen on following and Murphey lays them out one-by-one in his lyrics.

Whatcha Gonna Do With a Cowboy – Chris LeDoux

This cheeky country song was written by country legend Garth Brooks. Recorded by Chris LeDoux for his 1992 album by the same name, Brooks also appears on the recording alongside LeDoux. The song documents a woman’s newfound fascination with a cowboy, and all the funny ways he seems exotic to her.

Co-written by Ronnie Dunn himself. fellow country singer Reba McEntire told Ronnie if he didn’t cut the song she would. She kept contacting him until he finally got in the studio to record it, which is also when he invited her in to appear on the track alongside him. ‘Cowgirls Don’t Cry’ is a nod to southern women and the toughness instilled in them from a young age, many times through the process of learning to ride a horse.