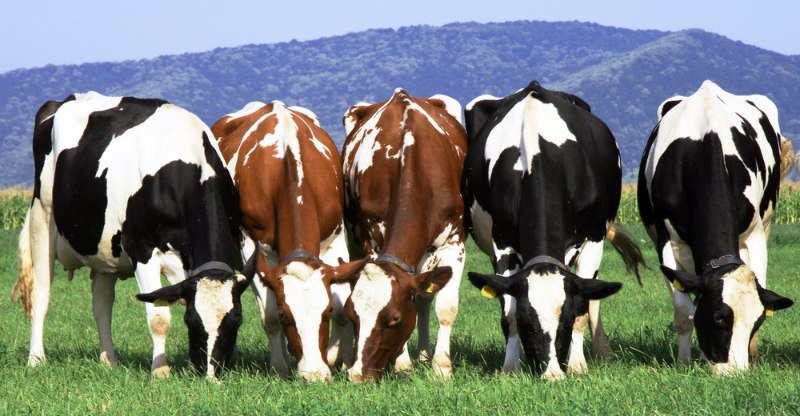 Though cows are a common subject found in country music, with western classics such as ‘Home on the Range’ dedicated to ranchers looking over their grazing cattle, other genres like rock and pop have also written about the stout farm animal. Some tunes, like the Foo Fighters’ ‘For All the Cows,’ take on a more metaphorical meaning regarding societal commentary.

You’ll be thoroughly entertained with this zany, eclectic playlist featuring a wide range of songs about cows.

In the early 2000s, country music hadn’t quite ventured into the songwriting territory of sexual undertones like its fellow pop, rock, and rap genres had done for decades. Country crooner Trace Adkins changed all that with his single ‘Brown Chicken Brown Cow,’ hilariously named after a popular guitar part often heard in adult films from days gone by (sing the title of the song along with the guitar melody, and you’ll get it). Adkins had to fight for the Casey Beathard-written single to be released. It appears on Adkins’ album, Cowboy’s Back in Town.

For All the Cows – Foo Fighters

Easy-going, jazzy rhythm is accentuated by bursts of hard rock choruses featuring frontman Dave Grohl’s gravelly screams. Lyrics hint about the role money plays in society and are backed by a common “cow” theme representing overindulgence and greed. ‘For All the Cows’ was the third single from the band’s self-titled debut album.

Related: Be sure to share the best songs about greed and money.

Pop culture musical ensemble NerdOut put their producer skills at the forefront with their animated project, ‘The Cow Song.’ Featured in the popular computer game Minecraft, the music video for the song features a scene from the game with the song’s lyrics representing the cow character’s perspective as he’s chased by a human character who wants to eat him. The song plays out in dramatic fashion with a heavy organ introduction and synth-pop vocal delivery.

Written by blues musician Kokomo Arnold in the early 1930s, the southpaw slide guitarist’s series of ‘Milk Cow Blues’ standards put him on the map as a fiery genre artist. Willie Nelson covered the tune in ’81 and added his own flare to it, occasionally breaking into his signature yodeling falsetto vocal technique while the lead violin is heard taking the place of guitar during instrumental parts.

“Yippee-i-ay—Cow Patti!” Vengeance is on the mind of fast-riding cowgirl Patti, whose father has just been murdered by a bandit who then skipped town. When the song opens, she’s hot on his heels as she tracks him down at a nearby saloon. She challenges him to a duel, and with a little help from a gift left in the street by a horse, she wins the fight. The comedic song was featured in the Clint Eastwood spaghetti western Any Which Way You Can.

Related: You’ll get a kick out of these funny songs that will make you laugh.

Quite possibly America’s most memorable western traditional song, ‘Home on the Range’ was written by Brewster Higley as a poem. He was an original cowboy, sometimes also called a homesteader, dating all the way back to the 1800s. His ode to his farmland was transformed into a languid western tune by his friend, war veteran Daniel Kelley. Performers from Roy Rodgers to Frank Sinatra have all released popular versions of the American musical treasure over the years.

Related: Check out our playlist of the best cowboy themed songs.

Headed up by humorist and songwriter Sandra Boynton, ‘Cows’ is an animated video/song combo featuring the bluegrass-inspired group The Seldom Herd. For ‘Cows,’ a paired-down early jazz approach is taken with the music as Boynton comedically constructs a lyrical story focused on the fun antics of one of America’s most beloved livestock animals. Their song ‘Pajama Time’ was featured in season 25 of the adult animated show South Park.

Related: Trot over to our playlist of songs about animals.

Corb Lund’s ‘Cows Around’ is a poetic tune at its core, a metaphor for cabin fever. The singer gently describes how city living gets him down, and he sometimes needs to get away to the country. He calls farmland a “western blessing” and tells listeners, “Everything is better with some cows around.”

Related: Appreciate nature with these songs about outdoors.

Country icon Eddy Arnold duets with LeAnn Rimes for ‘Cattle Call,’ a Tex Owens original she covered for her debut album, Blue. The original Owens composition dates back to 1934 when he watched snow fall on a cold Kansas day wishing he was herding cattle in the warm sunshine on a ranch somewhere. Deeply inspired, he wrote the single in only 30 minutes. Though Rimes never released her cover as a single with Arnold, it charted in the top 20 on Billboard Hot Country Songs.

Out on the Western Plain – Rory Gallagher

Blues-folk legend Lead Belly also wrote his fair share of “cowboy” tunes, and ‘Out on the Western Plain’ is one of his originals dating back to 1946. A song about the tale of a free-spirited rancher, prominent figures of historic wild west culture is mentioned, including Jesse James and Wild Bill. Rory Gallagher’s cover is the most well-known version of the country and western track. Van Morrison was recorded singing a live version of the song as well.

Often referred to as the first song the band They Might Be Giants rehearsed together for live shows, ‘Cowtown’ is based around the cowboy lifestyle, referencing the process of making room on a farm for more cattle. Though a screaming sound produced electronically is heard in between verses, for live shows nowadays, fans take care of the screaming themselves.

In 1942 singer Ella Fitzgerald joined the cast of Ride Em’ Cowboy, a popular film produced by the comedic duo Abbott and Costello. She recorded ‘Cow Cow Boogie’ for the movie, focusing on the classic cowboy archetype of southwest America. The song contains a blues structure but puts a spin on it with a “country boogie” styling.