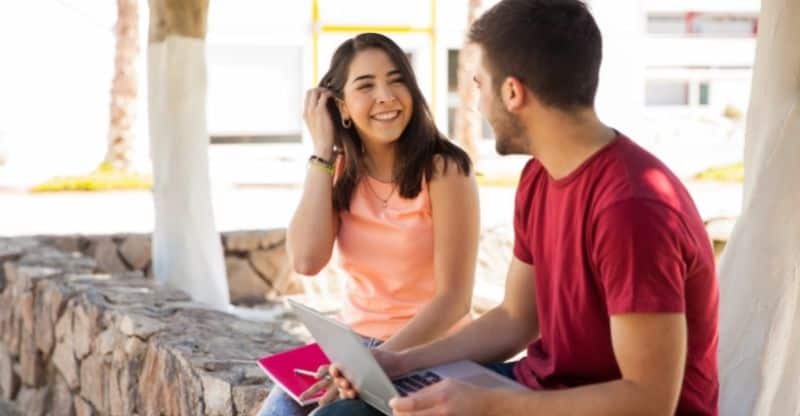 If you’ve met someone that gives you butterflies or makes you weak at the knees, we have news for you: you probably have a crush!

You’re not the first person to have one and fortunately for you there are some great songs about crushes that will calm you down a bit. Enjoy!

Got a crush on the boy next door, is there a sweeter feeling?

This cheerful song owned radio stations back in 2012, and it’s all about liking someone you’re too afraid to approach. We hope this song inspires you to make the first move – maybe even give your number, too.

Crushing on someone means liking them for who they are, and simple things about them become little perfections.

Bruno Mars’ 2010 hit shows a guy falling for a girl, as he romanticizes everything about her. When you look at the person you like, everything about them seems perfect, even if they’re not doing anything.

I’ve Got A Crush On You – Ella Fitzgerald

The song stays true to its title – it’s all about liking someone and the things that person makes you feel.

Sometimes, it’s not about the looks, but the way the person makes you feel. In this song, the singer doesn’t know what she did to deserve this person, but she’s forever grateful.

Have you ever liked someone so much that it was simply impossible to hide?

In Selena’s 2017 hit, ‘Bad Liar’, she sings about how hard it can be to admit you have a new love interest. The writers explained that the lyrics are about trying to avoid your feelings and failing at doing so.

Seeing the person you like with someone else, especially with someone who doesn’t treat them right, is never easy. This 2016 hit tells us all about it.

In ‘Treat You Better’, Mendes is trying to let his crush know that her man is not right for her and that he could give her what she deserves.

Talking to your new crush is never easy. Messing up your words, not knowing what to do with your hands, and sweating…it’s a rollercoaster.

In the song, Avril Lavigne describes the way catching feelings makes you tongue-tied. All that mess and awkwardness – early stages are not easy.

According to Radio Disney, this is the best crush song. Cute!

In the song, the narrator is captivated by her crush’s eyes. She dreams about driving with him through the night and getting to know him better. She likes him so much she simply can’t stay calm, but he just won’t make a move…

Butterflies in your stomach can often feel like fireworks, and this 2014 hit describes it best.

The song tells us how exciting catching feelings can be. Your crush becomes everything you think about, and your body reacts in the most beautiful ways – flushed cheeks, constant smiling, and you become the happiest version of yourself.

I Wanna Be Your Lover – Prince

Prince’s first American single is one of the best crush songs of all time, and it’s still relevant today.

This 1979 hit tells a story of a man who claims he can treat his crush better than the men she dates. He can’t offer her a lot of money but has all the love in the world.

If you just started developing feelings for someone, we got a perfect song for you.

The singer sings about having just a little crush, but still as overwhelming as a serious one. You don’t always have to be crazy about the person you like, and those feelings are still valid.

Realizing your crushing phase is turning into love can be scary, but sometimes we should simply indulge in the feeling.

This song is about realizing you are completely mesmerized by the person you like, and you start to question just how deep those feelings are. The big question follows these thoughts – is there a mutual crush forming?

One Thing – One Direction

What better artists to include in this playlist than the ones girls all over the world crushed on?

In ‘One Thing’, everyone’s favorite British heartthrobs sing about being head over heels with someone. You don’t always know what is it that you like about this person, but one thing is for sure – they take your breath away.

How could we not include the modern-day queen of romantic songs?

Going back to Swift’s country days, the song is all about that soul-crushing feeling when your crush doesn’t see you the same way. Liking someone can make you feel like a teenager again, no matter how old you are, and Taylor Swift shows us that.

When you truly like someone, you like them for the person they are and the way they make you feel – it’s that simple.

In ‘Ooh La La’, Britney describes that giddy feeling when you are with the person you like. They’re your best friend, and there’s nothing you’d rather do than spend time with them.

One of the first songs that came up to your mind when you first read the title, wasn’t it?

One of the most famous songs about crushes, this timeless hit tells a story of a person who can’t hold back from falling in love. Sometimes you simply can’t help it, even if you’re the King of Rock ‘n Roll.

We had to include this mid-90’s hip-hop hit, which is a bit different from the rest of the songs on the playlist.

Liking someone doesn’t mean you have to lose yourself in the process. In this song, Lil’ Kim lets her crush know that she’s not like other girls he’s messing with. We believe her!

Having a huge crush often means you want to spend every minute of the day with that person.

This song is all about that feeling when you don’t want the night to end so you’ll never have to part with the person you like. That rush of freedom when you love someone – that’s what makes it so special.

Bro code is a number one rule of friendship – you simply can’t fall for your friend’s partner. But what happens if you do?

The song tells a story of a guy whose heart made a huge mistake and made him fall in love with his friend’s girlfriend. Now, that must hurt…

Finding someone who makes your heart race becomes harder as we get older. When it finally happens, it all feels like a dream.

There’s nothing more beautiful than being with someone who makes you feel like a teenager again. Feeling that adrenaline rush and like you can barely breathe? Yes, it’s still possible.

Have you ever met someone so remarkable and perfect for you, that you want to show the whole world how great they are?

The lyrics of this famous The Beatles’ song tell a story of a guy being completely enchanted by the girl he met. He’s never liked someone this much, and he wants the world to know.

It’s hard not to fall in love when you look at your crush doing something they’re passionate about. Like surfing, for example.

The singer was inspired by driving around the beach one day. This was the first song he’s written, and it was a major success. Thank you, random surfer girl!

The Way You Make Me Feel – Michael Jackson

How could we not include one of the Michael Jackson classics that best captures the sweet feeling of being in love?

‘The Way You Make Me Feel’ stays true to its title. The song describes how this person made Jackson feel like no one else before. A classic that will make you feel all sorts of things, for sure.

Out of all the crush songs, we had to include one that will make you want to dance around your room singing about the person you like.

We all know that feeling of being an absolute sucker for someone. Being willing to do anything for the person you like – that’s what ‘Sucker’ is all about.

Into You – Ariana Grande

Don’t you ever get tired of waiting for your crush to make a move? Even Ariana Grande herself has been in that situation.

Luckily for us, she wrote a hit about it – and it’s a perfect song to send to your crush. We can’t think of a better way to confess.

Can’t Get You out of My Head – Kylie Minogue

Sometimes, dreaming of your crush and making up stories in your head is all that you are left with.

We get it, trying everything and still not getting your crush to notice you can be heartbreaking. We’re here to remind you of this hit that will help you dance it all out.

Liking someone who’s already taken is never easy. Sam Smith knows his way with words, and he wrote a perfect song for all of you in a similar situation.

It’s hard seeing your crush wasting time with someone who doesn’t deserve them. Smith believes he has much more to offer to this person that he can’t seem to replace.

Check Yes Or No – George Strait

Is there anything sweeter than a first crush? Somehow, they always seem to stick with you for a long time.

Before texting was a thing, kids used to pass notes asking their crushes if they feel the same. This wonderful country song will make you nostalgic about those simpler times.

A huge hit from 2012, ‘Boyfriend’ is a straightforward song about a guy wishing to be the girl’s boyfriend. Nothing better than being open and direct about your feelings.

Wishing to be more than friends with someone is what this song is all about. Thinking that your new relationship might be with your crush, is there anything more exciting?

ALove is all about those simple things, like holding your crush’s hand (possibly forever?) and sharing sweet moments together.

Fishing for a long-term relationship is not easy, but once you find the right person, it feels like all the pieces of the puzzle come together. Great song to use to make the next move.