18 Best Songs about Dogs to Celebrate our Furry Friends 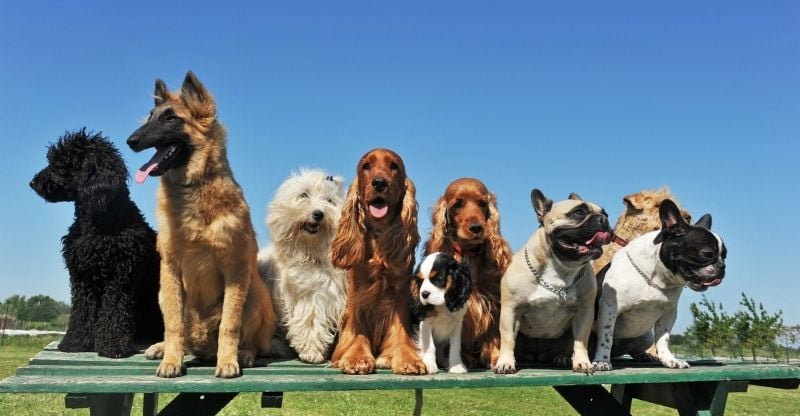 Dogs have made their mark on humanity (pun intended) with their beautiful eyes, fluffy fur, and wagging tails. They’re your best friend, your companion – and in many ways – generally easier to get on with than people :-).

So, without further ado, here’s our pick of the best songs about dogs to celebrate our furry friends.

I Love My Dog – Cat Stevens

Dogs are man’s best friends, as this song clearly shows! Cat Stevens seems to be singing to a partner and has the courage to basically say, “you might leave me, but my loyal dog won’t.” All his dog asks for is food, and love is all he needs. The fact that Cat mentions this makes you wonder if his partner was needy! It’s a fun and honest song that everyone probably relates to at some point.

Man of the Hour – Norah Jones

Norah Jones pretty much writes off all men for a dog in this comedic song. She’s clearly had it up to here with men and chooses to see all the good traits in her dog that will make her life easier. Her dog won’t cheat, make her cry, and he’ll even be the leader when they go on walks. Sure, she won’t get fun little romantic treats like a bouquet of roses, but when you’ve got a furry friend to snuggle with, who needs it?

You may think this song is “pointless,” but its reason for existing is too cute not to appreciate! David Gilmour of Pink Floyd was dog-sitting a German Shepard named Seamus. Whenever David played music or the guitar, Seamus would start to howl and bark. So, Pink Floyd wrote a bluesy song with dogs crying to capture the profound sadness this poor doggo felt every time he heard music. Makes you wonder if he was scared of the sound or had feelings about the music?

Ol’ Red ain’t a cuddly puppy; he’s a hound that’ll scare all the prisoners into obedience! The song tells a story about a man who ended up in prison because his wife cheated on him, and he obviously took care of the problem. The man befriended the warden and earned the job to take Ol’ Red out. The man got Red a girlfriend, and one night Red escaped to go see his girlfriend, which caused wardens to chase after him, and while nobody was watching, the man escaped prison and headed back home.

This song was written specifically as an intro song for Netflix’s docuseries, Dogs. It’s written from the perspective of a dog talking about their caregiver. The dog is grateful to be loved and so well cared for, noting that their human treats them with as much love and respect as a human child. This song will tug on your heart and make you want to hug your own dog, but don’t get too attached to it because it’s not a full song! What you hear in the intro of the series is all there is to it.

Neil Young remembers the “best old hound dog [he] ever did know” named King in this song. Neil told the dog everything, and he seemed to be his hunting buddy since King was capable of jumping out of the truck and chasing after deer. Neil says he’s the best dog he ever had but acknowledges that he’ll outlive many dogs and may find one that’s just as good as King someday. Still, King was indeed a dog who couldn’t be forgotten any time soon.

Who Let The Dogs Out – Baha Men

This party song has been well-known since it came out in 2000, and most people are probably familiar with the chorus. It sounds like it’s about a bunch of dogs that got out, but once you pay attention to the lyrics, you’ll realize that this song is bashing men who catcall women. It starts with “I tell the fellas start the name callin’, the ladies get angry, and then they ask, “who let the dogs out?” These men are nothing but dogs to them and are no longer welcome to the party!

Martha My Dear – The Beatles

Paul McCartney wrote this song about his Old English sheepdog he bought in 1965. She was an affectionate puppy, and he loved to play with her. He wrote this song as a piano exercise when he taught himself how to play the piano. It was difficult for him to play, which helped him get better at it. Some people thought the song was about a woman he wanted to marry, but no, it’s a playful song dedicated to his playful puppy.

The hound dog in this song is a man who didn’t treat his lady right, and she’s not putting up with it anymore. She compares him to a dog looking for a home and says she’s not going to feed him. She’s done crying over him, though, and isn’t going to be walked again. Elvis’s ‘Hound Dog’ is based on this song and became far more popular, hitting number one on the charts. Some say it’s a cover, but since the lyrics are changed significantly, and Big Mama Thornton didn’t get any credit, it’s probably safe to say it was stolen.

How Much Is That Doggy in the Window – Patti Page

In this song, a woman sees a dog in the window of a pet store and considers buying it for her husband. She has to go to California and is worried about leaving her husband alone. If she buys a dog, it’ll keep him company and protect him from robbers. It’s comical that she’s concerned about her husband staying home alone—you usually have to find someone to watch your dog, not your human!

Carrie Underwood sings of the unfortunate luck she has when it comes to finding a man. She keeps finding men who don’t respect her or don’t want a serious relationship. Every time she has to waste her evening with these guys, it makes her appreciate the loyalty and affection she gets from her dog. She goes as far as to ask why men can’t be “warm and loyal, open and friendly” like her dog, so you know she’s had some bad luck!

This song is about a man who desperately wants to be with a woman for a night. He’s finally able to and has a good time…until he realizes she left with his money and car. He’s bitter in the end, claiming she (and other women like her) don’t have a soul. You could say the title refers to the man’s actions since he behaved a bit like a dog in the beginning, but the band couldn’t come up with a title for this song, so they named it after the stray black dog they fed around the studio.

Get your tissue box ready—this one is like those dog movies you sob through. Chris Stapleton sings of an abandoned puppy he found in a parking lot. He took her home to give her a good life, and over the years, she became a protector of his kids and part of the family. She eventually grew old and passed away next to the man who rescued her. Chris says he’ll never meet a dog quite like her, and he’s probably right. You got any more tissues?

Me and You and a Dog Named Boo – Lobo

This song is about a couple with a dog who lived a nomadic lifestyle. They traveled the country and saw many different things. At one point, they stole from a farmer and had to work to make up for it, but they were given another tank of gas as a payment for their labor. It’s only been a month since the traveling family has been on the road, but they’re all itching to hit the highway again. Perhaps the dog is ready to go again, too.

Cracker Jack was a sweet dog who was Dolly Parton’s best friend when she was a child. She found him by a river and took him home to feed and love him. They developed a close bond and were always there for each other. Dolly said that the song was based on different dogs her family members had, but Cracker Jack was certainly real; he was her first dog, and even though she’s had many pets over the years, he was certainly unforgettable.

Little Boys Grow Up And Dogs Get Old – Luke Bryan

Luke Bryan sings of a black Labrador retriever his father bought him when he was just a kid. The kid and puppy grew up together. They were always there for each other, went fishing together, and Luke was sure he’d get to be with that dog forever. But, “little boys grow up, and dogs get old.” Luke became an adult, and his best friend reached the end of his life. Even so, he was a memorable dog that Luke will likely remember forever.

This is the age-old story of a little boy wishing he could have a dog. He dreams of taking his puppy wherever he goes, avoiding “no dogs allowed” signs, of course. He imagines the dog being his best friend forever and always having someone by his side. The song says that the possibility of having a dog is just a dream, but more quietly, it says, “your wish will come true.” You can assume the boy got his dog after all.

I Wanna Be Your Dog – The Stooges

The singer compares himself to a dog in this song. He’s frustrated in the song because he wants to spend the night with someone in a physical sense, and the music itself adds to that feeling of frustration and urgency. He’ll do whatever his partner for the night wants to do, which is how he comes to compare himself to a dog. He promises to be obedient and loyal, even if it’s just for one night.