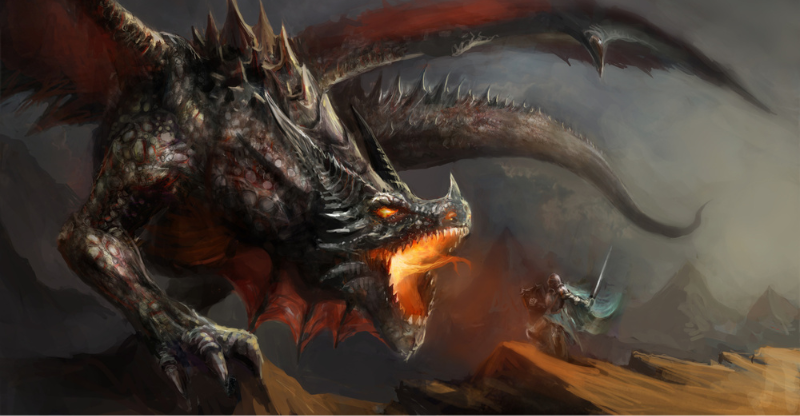 If you have ever secretly wished that dragons were real, these songs are for you!

These songs about dragons bring to life the mystical stories about dragons. Whether it’s painting them as ferocious and terrible beasts or marveling at the power and the strength these animals would have if they were real. Wake up your imagination with these incredible songs!

This breathy, sensual track has rippling riffs and captivating melodies. This ‘Dragon Queen’ has a powerful way of loving, asking, “how my love gonna show no scar?” The song has repetitive sections that make it a catchy one to sing along to. The great beat will definitely have you feeling yourself.

Related: You’ll feel on top of the world listening to these songs associated with royalty.

Ed Sheeran wrote this song for the 2013 movie The Hobbit: The Desolation of Smaug, where Smaug is a dragon that the heroes hope to destroy. The brotherhood of the characters is clear in the line, “if this is to end in fire, then we should all burn together,” which is also a spoken line in the movie. They are in this together, even when the life-threatening fire is the only thing they can see.

Related: It gets even hotter on our songs about burning playlist.

This relaxing and sentimental dragon song has two characters: Puff the Magic Dragon and Jackie Paper. Jackie is a little boy who comes to play with Puff, and the two have many adventures filled with wonder and childlike joy. Eventually, Jackie grows up, and Puff is left alone in his cave. It’s a sad tune about the inevitable way kids grow up and lose their magical innocence.

Related: This song features on our playlist of good folk songs.

Fallulah compares a toxic relationship to being with a dragon, and the vivid metaphors really make you understand how complicated an unhealthy love can be. She sings, “he burns me all the time. I can’t breathe, but I want more.” Even though he’s taking all her oxygen, she is still dedicated to him. It’s a vulnerable story about how your heart sometimes belongs to people who don’t deserve it.

This groovy song is not one of Queen’s most well-known, but it’s a great one all the same. The funky bassline and crashing cymbals, not to mention the guitar solo, make ‘Dragon Attack’ a high-energy jam. Queen sings about feeling weighed down by something, so much so that it’s like there’s a dragon on their back.

Dragons are often thought of as ferocious and dangerous creatures. But you would be an unstoppable force if they were on your side. Miriam Bryant offers to be a dragon for her partner, protecting them and helping them to fly high. She promises never to leave them, and her powerful vocals show her determination to keep this promise.

Related: Check out more of the best songs from mother to daughter.

Dance with the Dragon – Jefferson Starship

The cover art for ‘Dance with the Dragon’ pictures the dragon in question. It looks a little scary, but also like it would be down for a good time. This song has a driving rhythm and awesome electric guitar. The track was released in 1976, which was the year of the dragon, explaining the many references to New Year’s.

Related: You might not be able to dance with dragons, but you can jam to the best songs about dances.

‘Dragon’ is a passionate and intense song, with Tori Amos’ enchanting vocals transporting us into the song. It seems like Amos is offering to help someone slay their dragons. She says, “won’t you lay here with me, and I will bring kisses for the beast.” Something is torturing this person, and Amos wants to give them comfort.

Electronic and staticky elements make this song sound futuristic, like an alien announcement about a future we can’t even begin to fathom. T. Rex spends the song describing a dragon of the future with lines like “deep beneath an ancient shadow, stunned with age and too much wisdom.” A long scream towards the end of the track makes the descriptions even more unnerving.

Related: Whether you’re excited or scared of the future, you’ll enjoy our future songs playlist.

This stripped-back acoustic track mainly features a heavily strummed guitar and intimate vocals. Towards the end of the song, some fantastical strings give the song its mystical edge. The lyrics aren’t clear, referencing dragons, love, and Peter Pan. Overall, it’s just a good time!

Related: Listen to these great songs about remembering the good times.

My Chemical Romance is known for its high energy, punk rock style, and aggressive vibe. This song has a fast tempo, intense vocals, and shredding guitars and drums. The chorus features the line “I got a medical emergency” repeated several times, and it’s likely an injury from participating in the fight club referenced in the title.

An emotional song with an arpeggiating piano, ‘El Dragón’ is sung in Spanish, talking about how the memories of a lost love take on the ferocity of a dragon. When translated to English, the chorus says, “looks like a dragon, your memories remained spraying fire.” The pain of the memories feels like being burned alive by an untamed beast.

Related: Look back with these songs about the past.