31 Songs About Europe That Celebrate This Fascinating Continent 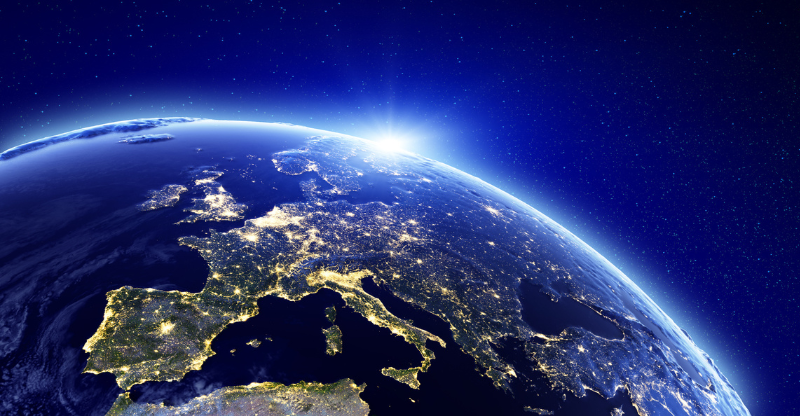 Europe is a large and fascinating continent packed full of diverse countries and cultures.

It is no surprise that musicians from Europe and beyond have had much to say about it. Keep reading to discover some of the best songs about Europe.

This is the title track of the 1977 Kraftwerk album of the same name. The simple lyrics mainly refer to the group’s collaborations with other artists: “Met Iggy Pop and David Bowie.” It also talks about Vienna, Austria; Düsseldorf, Germany; and Paris, France.

Each member of Ultravox contributed to this song’s writing. While the lyrics are somewhat abstract at times, there seem to be themes of loss and possibly a breakup present throughout. It seems the person either has memories with someone special in Vienna or is singing about Vienna itself.

Related: Travel to our playlist of songs about countries or cities.

‘Zoo Station’ is named after the train station called Zoo Bahnhof in Berlin, the capital of Germany. The train station is where the U2 line’s underground portion begins. In the song, the narrator is ready for a new beginning, represented by train and train station imagery. It seems that this fresh start might involve an exciting new romance.

Related: This song features on our list of songs that start with Z.

Teleman explores their brief time spent in Düsseldorf, Germany, in this piece. The music was written before the trip inspired the lyrics, which remind listeners of fleeting memories and people left behind after a short trip to a new place.

Where Are We Now? – David Bowie

This song’s video surprised fans on David Bowie’s 66th birthday after rumors of the artist’s poor health were circulated. The song describes Bowie’s time in Berlin, Germany, and the places he lived while creating some of his classic albums.

Here’s an ode to Paris and its beauty during all seasons and in every way: “I love Paris every moment. Every moment of the year.” Cole Porter wrote this classic; Lilo first recorded it, while notable artists such as Ella Fitzgerald, Frank Sinatra, and Harry Connick, Jr. have covered it since its first performance.

R.E.M. criticizes the US radio network known as Radio Free Europe in this track, as it is susceptible to being used to spread propaganda to Eastern Europe even though its roots are pure. This was the band’s first single; a more well-produced version was released on the band’s first studio album, Murmur, released in 1983.

Related: Turn up the volume for these songs about radios.

It has been said that this song was based on true events that occurred at an AC/DC concert. The police showed up because the band went over a curfew that law enforcement had set and wasn’t supposed to be on stage.

Related: Breaking rules? You might need to hear the best songs about the law.

Europe is Our Playground – Suede

This Europe song is about a fun-loving couple exploring the continent and doing whatever they want there: “Europe is our playground, London is our town, so run with me baby, now.” It reminds listeners of the powerful and light feelings one can experience in the right romantic relationship.

‘Rotterdam’ is one of several songs that marked The Beautiful South’s move to a country style of music. It presents an all-too-relatable theme of loneliness and its pervasiveness in one’s life. The song was popular in Germany, the UK, and Ireland.

Related: Check out our playlist of songs about being lonely.

This interesting French and English song combines Astor Piazzolla’s original song ‘Libertango” with a reggae vibe and lyrics written by Grace Jones and Barry Reynolds. It looks at the glamourous Paris nightlife from a darker angle. A Spanish version and an English version with the French lyrics translated into Portuguese also exist.

Neutral Milk Hotel tells the story of Anne Frank in this song with a catchy melody, which is part of a longer album that discusses Frank’s life. Stephen Colbert uses the song to pay homage to his father and two brothers that passed away in a plane crash during the last episode of his series The Colbert Report in 2014.

The narrator of this song remembers a romantic experience at a cafe in Berlin with a lover who has since left him. The song is quite long, at five minutes and 16 seconds, and originally appeared on Lou Reed’s debut album. It eventually became the title song of an album where it appeared in a shorter length.

Related: If you liked the length of this one, you’ll enjoy our long songs playlist.

Perhaps one of the most well-known Europe songs, ‘Spanish Bombs’ addresses a violent campaign against holiday resorts near Costa Del Sol. The lyrics compare the events to the Spanish Civil War and make many war-related historical references. Mexican group Tijuana No covered the song after The Clash’s original release.

Related: Learn something with the best songs relating to history.

Here we have a protagonist who seems to be living a life full of regret. It seems that a heartbreak occurred with someone that he cared about quite deeply. It seems that he won’t forget this romance any time soon: “And my one love song was a tattoo upon my palm. You wrote upon me when you took my hand.”

Related: Chill out with these vacation themed songs.

A Song for Europe – Roxy Music

There are Latin and French lyrics mixed in with this otherwise English-language piece about a breakup. The narrator sits alone in a cafe and misses the past relationship. He seems to come to terms with the fact that he will never be with his past partner again.

Related: Dealing with a breakup? Check out these broken up songs.

This track explores the significance of African-Americans in French and Parisian history and society, with a special focus on black artists. The music video consists of live performance footage with some extra effects. The song went platinum about two months after its album’s release.

Montserrat Caballé asked Freddie Mercury to write a song about her hometown of Barcelona, which is how this song came to be. The lyrics tell the story of someone who meets a love interest in the city. The song was released in 1988 on an album of the same name.

Fleet Foxes seems to sing of someone who escapes to Mykonos after making a mess of something, possibly a relationship or just life in general. The narrator reminds this person that he should be careful, as it is hard to find people who can trust and care about you.

This song came to Gruff Rhys in a dream. It details Rhys’ fond memories of touring the EU and the friendship he felt while doing so. The song can be interpreted as a more general love song but was truly written as an ode to Europe.

Here, Parquet Courts explore what it feels like to say goodbye to someone you aren’t near while feeling lost and lonely in an unfamiliar place. It is relatable to anyone who has ever felt out of place and unsure how to fit into the world.

Related: Listen to these low self esteem songs if you’re struggling with confidence or fitting in.

‘Free Man in Paris’ is a track that shows listeners how hard it can be to deal with pressure from the music industry as an artist. David Geffen, who ran Joni Mitchell’s record label, contributed his own struggles with the music industry to the song. The song mainly reflects Geffen’s desire for a simpler life where he isn’t as easy to reach.

Holidays in the Sun – Sex Pistols

This song explores the trip that Sid Vicious and John Lydon took to Berlin to get away from negative publicity and their views over the Berlin Wall from West Germany. The lyrics show how paranoid and trapped the band felt and how they used their need for escape as an excuse to travel to Berlin.

Related: Feeling like you can’t get out? Here are some stuck songs.

The Broad Majestic Shannon – The Pogues

This song’s title was likely inspired by the song ‘Will You Come to the Bower,’ which talks of the broad Majestic Shannon. The narrator tries to console someone—possibly a lost love—with the belief that the two will meet and love again.

This is a track that explores and criticizes the culture of famous DJs. A gig in Ibiza and the superficial behavior of people there inspired the lyrics. The song even criticizes the overall culture of EDM music to an extent. Many listeners may find the song to have humorous elements on closer inspection.

This appears on a short album of the same name. It seems that European politics, countries, and relations are criticized to some extent within the lyrics. Beyond that, the lyrics are full of imagery yet somewhat abstract.

In Germany Before the War – Randy Newman

Randy Newman’s ‘In Germany Before the War’ was inspired by the 1931 film M about a criminal. The film and song are both about serial killers. Since Newman’s version was set in 1934, it is often seen as a metaphor for the impending doom to come in Germany in that era.

Here’s a track that explains the interconnected nature of European countries and the tendency of European residents to travel between neighboring countries on a regular basis. The song celebrates being European, and being British in particular.

Related: How often do you get around? Enjoy the best songs about traveling the world.

This is considered to be one of John Cale’s most popular songs. The lyrics explore the complexities present in the Treaty of Versailles, which was considered one of the causes of Hitler’s rise to power and World War II. The orchestra arrangement and cheerful vocals stand in contrast to the heavy subject matter.

Christer Sjögren signs an ode to Europe and its wonderful people here. The song is mainly in English but includes lyrics in Italian, Spanish, French, and German for a multicultural feel. Sjögren released a new version of the song, as well.

This was the first single from Gorky’s Zygotic Mynci’s album of the same name. The song’s narrator runs off with a dance troupe from Spain after having trouble at school and seems to fall in love during this life-changing experience.