19 Best Songs about Fall (or Autumn) 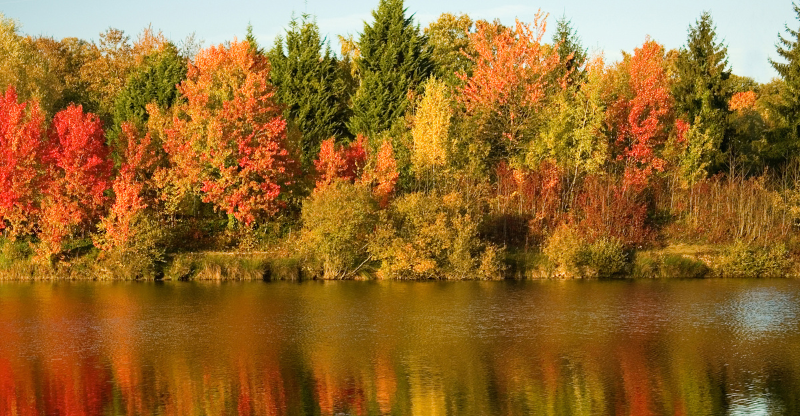 Cool nights, crunchy leaves, costume parties – it must be fall!

The fall season represents many things to artists, including transformation and change, death and rebirth, and spirituality.

In this list featuring songs about fall, bands such as The White Stripes, Guns N’ Roses, and The Flaming Lips explore the many-layered themes associated with the autumnal season. Throughout the selection are several particularly poetic songs like ‘Autumn Town Leaves’ by folk artist Iron & Wine.

Grab your favorite warm beverage and a blanket and enjoy this playlist of fall songs.

Leaves That Are Green – Simon & Garfunkel

Songwriter Paul Simon’s introspective ‘Leaves That are Green’ tackles the often difficult subjects of getting older and being unable to stop time. The song was first recorded for Simon’s solo album The Paul Simon Songbook in 1965. But when he teamed up with Art Garfunkel for their iconic Sounds of Silence album, they added the tune to the track listing and re-recorded it as Simon & Garfunkel.

Related: Spend your years listening to our growing up songs playlist.

Recognized as one of their songs that is the easiest to dance to, Yo La Tengo gets in touch with their softer lyrical side with ‘Autumn Sweater.’ The song’s overall meaning is rather open-ended. Some speculate it’s a bit of a coming-of-age tale tackling insecurities. Others say it’s a love song about a couple trying to spice things up. Vulnerability is a major theme tackled throughout the story.

Related: Check out our fashionable playlist of fashion songs.

“And there ain’t nobody in New York City that could need you half as bad.” First and foremost, songwriter Corb Lund’s ‘September’ from his 2012 album Cain Fever is a love song. The opening lines feature easily relatable lyrics from a guy confessing his love for his girlfriend. As the lyrics unfold, though, we realize his love has an unrequited element because his girlfriend left him to move to New York.

Appearing on the pop-punk band’s 2004 American Idiot album, the iconic song ‘Wake Me Up When September Ends’ was originally written by frontman Billie Joe Armstrong about his father’s terminal battle with cancer when Armstrong was just a young boy. The album was recorded as an anti-war statement, and the band went in that direction with the single’s video. The element of loss is an overarching theme within the lyrics.

Related: This track features on our playlist of September songs, as well as on our list of songs about lost love.

Composed as a jazz tune, ‘Autumn in New York’ dates all the way back to the 1930s. After writing the tune, Vernon Duke gave it to the musical Thumbs Up! to be used in the play. Many artists have gone on to cover the song, with Frank Sinatra’s version being one of the most popular. Other artists such as Billie Holiday and Ella Fitzgerald with Louis Armstrong have also covered the jazzy standard.

Guns N Roses frontman Brett Michaels might have a tough exterior, but he lets his more sensitive side show through his songwriting. ‘November Rain’ is another Michaels tune exploring unreciprocated love. Just as he leaves an unhealthy relationship behind in ‘Every Rose Has Its Thorn,’ he also says goodbye to a toxic relationship in this number.

Related: Enjoy a drizzly day with this playlist of rain music.

“Through the trees comes autumn with her serenade.” Harry James first recorded and released this song in 1956. Years later, Johnny Hartman and John Coltrane covered the tune in 1963. The song flows like poetry, with lyrical lines acting as an ode to the transformative fall months. This timeless, easygoing tune appears on Coltrane’s Standards album.

Tinged with heartache for a lost lover, ‘Autumn Leaves’ was first written as a French song titled ‘Les Feuilles Mortes,’ which translates into “the dead leaves.” Featuring a protagonist pining for a lover who’s left her, the lyrics feature autumnal metaphors as representations of the person who has left. Artists such as Eric Clapton and Frank Sinatra have covered the tune, with Clapton adding a particularly bluesy spin to his rendition.

Alt-rock band The Neighbourhood is known for their angst-filled music, and their tune ‘Sweater Weather’ is no exception. It appears on their 2013 I Love You album, which was well received. After the album’s release, though, the band went through an emotional period, worrying if they’d be able to reproduce their success with future projects. They used this as fuel for their follow-up album, Wiped Out!

Like much of the music in the disco era, this ’78 single focuses on living in the moment and having a good time. Its groovy beat makes it an ideal tune to dance the night away to, while the devil may care lyrics remind you not to take life so seriously. It’s an Earth, Wind, and Fire classic meant to lift spirits and inspire happiness in listeners.

Related: Improve your party with this party playlist.

“It’s all part of my autumn almanac.” This sweet 1967 song was actually a single release not associated with an album at first. It represented a joyous celebration of British suburbia, especially regarding gardening. Band member Ray Davies was inspired to pen the song after a longtime family friend stopped by his house and helped him clean up his backyard garden.

“Only a fool believes that he is different from the birds in the sky.” Featured on their 2006 album At War With The Mystics, ‘My Cosmic Autumn Rebellion’ is an anthem inspiring listeners not to get caught up in societal conventions and to live the life they want. The alternative band is known for their music rebelling against the status quo. Autumn stands as a great metaphor for that theme.

Related: Lift yourself up with this playlist of songs about being yourself.

Dead Leaves and the Dirty Ground – The White Stripes

Songwriter Jack White uses gothic fall imagery in ‘Dead Leaves and the Dirty Ground’ to describe his feelings of loneliness as he tries to live his life without his lover, who has recently left him. Within the song are bits and pieces of Blues master Son House’s song ‘Death Letter Blues.’ White’s main influences are early delta bluesmen like Son House, Robert Johnson, and Lead Belly.

“Some want love, and some want gold.” Featured on his album Weed Garden, folk artist Iron & Wine uses poetic lyrics to describe transformation and change. Throughout the various verses, as he describes the changing of people and seasons, he confesses, “I just want to see you in the morning,” signifying at the heart of this autumnal confessional is a love story.

Playing as something of a meditation, Van Morrison’s ‘Autumn Song’ teaches us about “mindfulness” before it became in trend to be mindful. This early ’70s release causes the listener to reflect on all things fall as he describes a beautiful, late-in-the-year setting. The reflective song by the Celtic-soul artist clocks in at a whopping ten minutes.

Acting as an unofficial follow-up to his award-winning 1972 album Harvest, Harvest Moon explores many of the same themes found in the first installment. Young tackles tough issues from war to perilous farm life and environmental issues. Throughout his career, Young has used the moon as a compass that helps him navigate choppy waters. It’s a constant in his music, and he’s known to schedule his work according to the moon’s phases.

Related: This song features on our best moon songs list.

“Here it comes again; that same old chilly wind will blow like a cold winter squall.” Written by Nashville songwriters Green Daniel and Gretchen Peters, one of country music’s last true cowboys recorded it in the early ’90s. It’s a classic George Strait single featuring the cowboy contemplating his tortured relationship with a woman who hasn’t been faithful to him.

Related: You’ll get blown away with our list of the best wind songs.

The Last Day of Summer – The Cure

A fan favorite among The Cure enthusiasts, ‘The Last Day of Summer’ has been hailed as one of the band’s most “beautiful songs” ever recorded. The lyrics focus on ushering in the fall season and the painful changes that come along in life, much like the changing seasons.

The Boys of Fall – Kenny Chesney

American football games reign supreme during the fall in the US. Country artist Kenny Chesney’s ‘The Boys of Fall’ is a tribute to the game and the boys who play it. Fall represents the season at hand and always getting back up after being knocked down by an opponent. Popular Nashville artists and songwriters Casey Beathard and Dave Turnbull wrote the tune before handing it off to Chesney to record it.