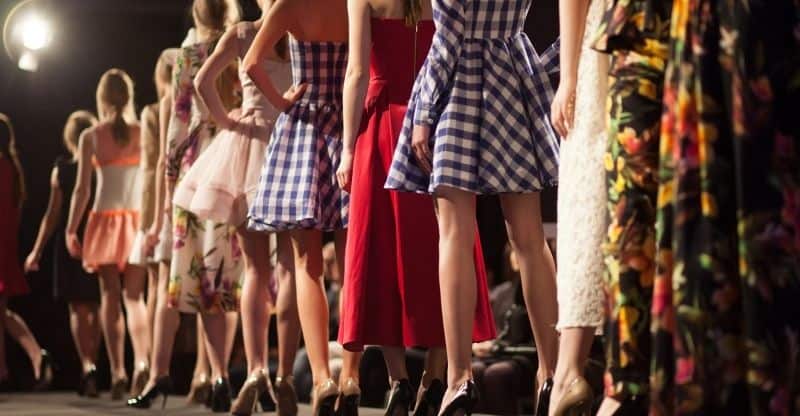 There’s one thing that never goes out of style, and that is music.

Fashion trends come and go, but singing about clothes, beauty, and luxury is a timeless theme that inspired many artists over the years.

This playlist is made for all you fashionistas out there, as we present you with our pick of the best songs about fashion. Time to put on your best frock and go shopping. 🙂

Strike a pose – it’s time to vogue! Although the famous high-fashion magazine is the first association when you hear the word now, back in the 80s, ‘vogue’ meant a bit more. ‘Vogueing’ was a dance popular among the LGBT community, and it was all the rage in the clubs. In so many ways, Madonna’s hit is an ode to escapism, even 30 years later, as it reminds us how far the fight for equality has gone, and how far it yet has to go.

Not the most popular song from our dear Black Eyed Peas, but nonetheless a must-have on our playlist that will definitely shake things up. This dance number is Fergie’s way to pay tribute to her huge inspiration, Blondie, who helped her shape into the singer she is today. Get into your best outfit, put your party shoes on, and let’s dance the night away 2010s style!

Is there a more fitting person to include in our playlist than the fashion icon whose style continues to influence us even decades later? David Bowie’s legacy in both music and fashion lives on as we remember one of his biggest hits, appropriately named – ‘Fashion’. The song expresses his criticism of the industry he influenced so deeply, as it shows his deprecating look at the shallowness of the fashion world.

Let’s be honest, none of us really remember the members of ZZ Top as fashion icons, yet is there anything more attractive than self-awareness? One of their best-known songs, ‘Sharp Dressed Man’, recognizes the fondness women have for men who like to suit up. Although denim is more of a ZZ Top thing, silk suits were all the rage back in the ‘80s, and still, it never stopped them from being who they really are, which is why we love them.

Dedicated Follower of Fashion – The Kinks

The Swinging Sixties – the period of liberated attitudes of the youth and rebellion against the conservatism which could’ve been felt across art, culture, and, of course, fashion. ‘Dedicated Follower of Fashion’ is one of many pieces influenced by this crazy era. Although Ray Davies was at the heart of Swinging London’s elite, the song shows mockery of the culture. After all, is there anyone better to write such a song if not the person who’s a part of it all?

The best kind of songs are those that take over the energy of the room and transport you to a completely different world, and that’s exactly what the singer of our next song claims it will do to you. ‘The Sweater Song’ was inspired by an English class. The professor demonstrated the effectiveness of a thesis by an image of a thread in a sweater that unravels as a person walks away – and the rest is history.

These Boots Are Made For Walkin’ – Nancy Sinatra

If Frank Sinatra himself says that “the song about boots is the best”, you best believe it is. Nancy Sinatra’s breakthrough hit is considered one of the best songs of the 60s, and even decades later it continues to make its way into pop culture. The growing trend of teens using this song in their TiKTok videos today justifies its title as an evergreen classic.

Devil with a Blue Dress On – Mitch Ryder & The Detroit Wheels

Are you imagining the devil wearing a short blue dress – horns, and everything? That’s not exactly the idea here. The narrator of the song was so enchanted by this one girl that he, apparently, called her a devil? That’s definitely a new way to show affection…Either way, the song describes a very handsome woman, who likes accessories a bit too much as she caught the eye of our singer.

One of the biggest fashion icons and trend-setters of our time, Lady Gaga is a perfect addition to every fashionista’s playlist. Although often controversial, Gaga’s style is sure to leave a mark on every event. The fashion designer Alexander McQueen, who was her close friend, committed suicide back in 2010. Deeply affected by the tragedy, the singer paid tribute through ‘Fashion’ – a song that’s all about the love for transformation and its power.

If you had a boyfriend who looked like James Dean, you’d probably write a song about him, too. Like many of her other tunes, ‘Blue Jeans’ was inspired by Lana Del Rey’s real-life love affair. Falling for a bad boy is a universal experience for a lot of women, but it rarely ends well – and this song proves it. Her ‘knock-off’ James Dean was quick to get caught up in money and drugs, leaving her behind.

A song that reached fame twice and continues to do so today through many covers, ‘Blue Velvet’ was not our singer’s favorite, but the world definitely loved it. The man in the song reminiscence on his past lover, thinking about her in a blue dress. Although it was a hit when it first came out, the song reached new audiences after a 1986 David Lynch movie of the same name, starring a brilliantly psychotic Dennis Hopper.

Considered the first proper rock’n’roll hit, ‘Blue Suede Shoes’ paved the way for decades of rock classics. Although this was Perkins’ only song that reached the top of the charts, we can thank him for the influence his music had on many iconic artists, such as Johnny Cash, Elvis Presley, and The Beatles. The track’s meaning is simple – it’s a song about shoes. Quite literally. It’s about all the things he’d like more than getting his shoes scuffed. Love it.

Related: check out our list of songs about shoes.

A classic ‘money can’t buy happiness’ type of song, but at least these never get old, right? Neil Diamond is a poet, among many things, so it comes as no surprise that this song is a metaphor. The message of the tune is pretty clear – the singer would rather spend his life with the woman he loves than have all the wealth in the world.

Being a part of a music scene is never easy and it requires a great deal of courage, sacrifice, and a strong heart. The industry changes fast and expects you to change with it, which often means giving up on your authenticity. ‘Cut You Hair’ is a satirical look at the pressures of the music industry and the fights against its standards, as well as a constant challenge to stay relevant.

When we hear the name Marilyn Monroe, our minds immediately think of luxury, elegance, and high-end fashion, and her most famous song captures it all. As the title suggests, the classic ‘Diamonds Are a Girl’s Best Friend’ is all about the bling. Today, the phrase became a part of our everyday language, and Monroe’s magical performance of the song remains iconic, inspiring many contemporary female artists even 70 years later.

You know when you hear a song and you just know it’s going to be a summer hit? When it first came out, ‘She’s In Fashion’ was impossible to escape. The singer’s girlfriend was a model, so it’s possible that this song is about her, as it shows the power she had over him. If a beautiful woman tells you the sky is green – you best believe it is. That’s the power she holds.