16 Best Songs about Fighting and Never Giving Up 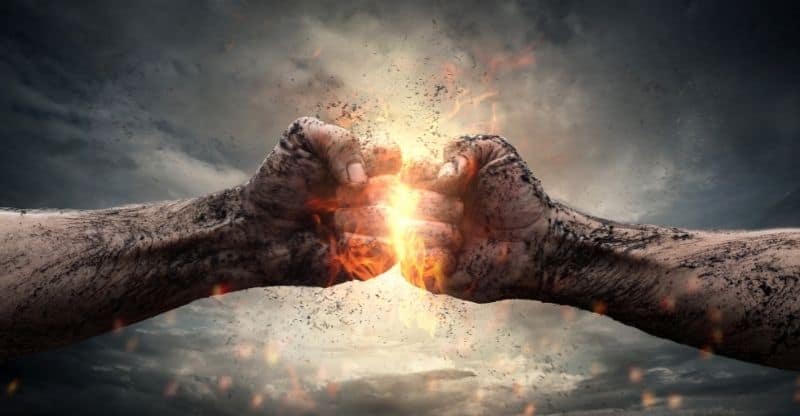 But sometimes fighting is a positive thing; fighting for justice, freedom, equality, and social change, in the hope that things will get better.

Here we share some of the best songs about fighting that cover all the above. Most are as relevant today as they were when they were written.

‘Eye of the Tiger’ by Survivor

The biggest hit of 1982, and one of the most overplayed songs of the ’80s, the rocker ‘Eye of the Tiger’ is pure adrenaline.

Cheesy? You bet. Remember, this was the ’80s when soft rock and silly Bon Jovi style hairstyles were all the rage. But still a classic tune with an awesome Van Halen-esque guitar riff.

The song was made for Rocky III at the request of Sylvester Stallone. Interestingly, Stallone had planned to use Queen’s ‘Another One Bites the Dust’ but was refused permission.

Pop diva Katy Perry sings “I got the eye of the tiger” in her 2013 #1 hit ‘Roar’. She paid no royalites to Survivor, who didn’t take legal action. Nice chaps.

‘(You Gotta) Fight For Your Right (To Party!)’ by The Beastie Boys

The fourth single from their debut album Licensed to Ill, the track became one of the Beastie Boys’ most popular songs.

It was meant as a parody of party songs (or, as band member MCA said in the liner notes to their anthology, a “goof” on dumb rock songs). But, unfortunately, the irony was lost on a lot of young guys who took it literally.

The song got the Beastie Boys on MTV, putting them in front of a huge audience. As a result, the Licensed To Ill album hit #1 and become the first rap album to top the US billboard chart.

The Stones’ most political song was inspired by a demonstration at Grosvenor Square in London (in 1968) that Mick Jagger attended, condemning the Vietnam war.

The lyrics actively encouraged fans to take to the streets:

“Everywhere I hear the sound of marching, charging feet, boy / ‘Cause summer’s here and the time is right for fighting in the street, boy”

The Beatles released their song ‘Revolution’ – which was also their first political song – the same month this song was released.

‘Fussing and Fighting’ by Bob Marley

To Jamaica now, where a young Bob Marley was working with the brilliant producer Lee Scratch Perry to make this seminal Marley track. The jumping bass line, the falsetto backing vocals, and that sax. Wowsers.

It’s a call for peace from the man who would become the kind of reggae worldwide:

“We should really love each other, in peace and harmony / Instead of here, fussing and fighting, like we ain’t supposed to be”

‘Fight the Power’ by Public Enemy

Released by American hip hop group Public Enemy in 1989, ‘Fight the Power’ is their most famous tune. It’s a political song that urges us to “fight the powers that be” and a protest against racial injustice.

The song was inspired by the Isley Brothers’ song of the same name (from 1975). In a Rolling Stone interview, Chuck D said, “The challenge was, could we make something entirely different that said the same thing in another genre?”.

The song was played on repeat by the Serbian dissident radio station B92, which played the song on repeat in protest to the rule of Slobodan Miloševic (during the Yugoslav Wars).

‘Love is a Battlefield’ by Pat Benatar

Ranked at number 30 in VH1‘s list of the 100 Greatest Songs of the 1980s, ‘Love is a Battlefield’ is an ’80s pop classic with a driving bassline and the quintessential drum machine that was all the rage back then.

Growing up and escaping over-protective, burdensome parents was the theme of many ’80s movies (e.g., Ferris Bueller’s Day Off, The Breakfast Club, etc.). ‘Love is a Battlefield’ takes a similar vein, with the opening line: “We are young / Heartache to heartache we stand.”

The music video shows a young Pat Benatar playing a rebellious teenage girl running away from her idyllic picket-fenced suburban home (but domineering father) to find a new beginning.

The video was the first ever to feature the use of dialogue.

Falling into the ‘nu metal’ genre, ‘Break Stuff’ is pure anger bottled in a song!

Lead singer Fred Durst is having one of those days ‘Where you don’t want to wake up’ and “You want to justify / Rippin’ someone’s head off.”

His solution? To break stuff.

The video is pretty cool, with some cameo appearances from the likes of Snoop Dogg, Dr. Dre, Eminem, and even Roger Daltrey.

‘A Punch Up at a Wedding’ by Radiohead

Starting with a total of 43 ‘nos’ at the beginning (a record, surely), it’s a song all about someone who wants to pick a fight.

The song was inspired by a bad review after one of their shows in their hometown of Oxford, England (a show that frontman Thom Yorke thought went really well).

The lyrics “Hypocrite opportunist” and “You had the pointless snide remarks” seem to back that theory up.

Band members Jonny Greenwood and Phil Selway both appear in the movie ‘Harry Potter and the Goblet of Fire’. They are members of the band that plays at the yule ball.

‘Mama Said Knock You Out’ by LL Cool J

If you need to overcome an opponent, then this is the song to get you fired up.

The story goes that LL Cool J was getting dissed by some new rappers. When he shared woes with his grandmother, she told him to go “knock them out.” Hence the name and theme of the song.

His Grandmother appears at the end of the song saying “go on and take out that garbage”.

If you ever needed a song to get you in the mood for a Saturday night out, then this is the one (minus the fighting, perhaps!).

It’s a rollicking, lively rock ‘n roller of a song.

There’s some questionable stereotyping of ‘the working class’ that pop songs wouldn’t get away with these days, such as “I’m a juvenile product of the working class / Whose best friend floats in the bottom of a glass.”

Some say it’s a parody of – or at least inspired by – the Rolling Stones’ ‘Street Fighting Man’ (also on this list).

‘Kiss With A Fist’ by Florence and the Machine

Florence and the Machine’s debut single, the wonderfully titled ‘Kiss With A Fist,’ was initially thought to be about domestic violence.

Florence emphatically denies it wasn’t, stating (on her MySpace page – remember that?!) the song is about “two people pushing each other to psychological extremes because they are fighting but they still love each other.”

That settles that then.

Florence and the Machine’s music has been characterised as a mix of “classic soul and midnight-on-the-moors English art rock”. Gotta love that description!

Here’s one of the best songs about not giving up when times are tough, by Destiny’s Child.

The idea came about when the group was compared to the TV show ‘Survivor’ owing to the frequent changes of the band members – in fairness, there was a degree of chopping and changing before they settled on the best-known lineup of Beyoncé Knowles, Kelly Rowland, and Michelle Williams.

Destiny’s Child has sold more than sixty million records worldwide, making them one of the most successful trios in music history.

‘Fight Song’ is called an empowerment anthem and was written at an all-time low for Platten when she had severe doubts if she would make it as a musician.

She found the last drop of gasoline in the tank and trusted in herself. The result was this monster of a song that got picked up for Hillary Clinton’s presidential campaign.

“And I don’t really care if nobody else believes / ‘Cause I’ve still got a lot of fight left in me.”

We feature this track on our songs about bravery playlist.

Platten spent nearly a decade striving for a career in music. When she got her big break with this song, she got signed to a major label within 72 hours of the song appearing on the radio. Just goes to show, sometimes you gotta keep believing.

‘Till I Collapse’ by Eminem

‘Till I Collapse’ is the ultimate motivation song that will grab you by the throat and make you keep going till your last breath.

Giving up is not an option. You “gotta search within you” to “find that inner strength” and “not be a quitter.”

The drumbeat and handclap is reminiscent of Queen’s ‘We Will Rock You’.

“‘Till I Collapse” was ranked the ‘Top Workout Song of All Time’ by streaming service Spotify. So listen to it during your next workout.

‘Fighting My Way Back’ by Thin Lizzy

Another song that’s all about picking yourself, dusting yourself down, and going again.

“I’m tough, rough, ready and able / To pick myself up from under this table.”

He admits: “I’m a little sick, unsure, unsound and unstable” but “I’m fighting my way back.” That’s the spirit!

One of the most underappreciated hard rock bands of the mid-70s, Irish singer/songwriter and bassist Phil Lynott was a creative force and as a black man, quite an anomaly in the nearly all-white world of hard rock. The biggest song was the brilliant ‘The Boys Are Back in Town’.

Now to the martial arts, with this disco song by Jamaican vocalist Carl Douglas. The song was originally intended as a B side to his song ‘I Want to Give You My Everything’ and was recorded in the last 10 minutes of studio time without taking it too seriously.

The record company Pye decided to flip the order, making ‘Kung Fu Fighting’ the A-side, and right there, history was made. The song went on to be a massive hit, selling sell eleven million records worldwide and topping the charts in the US.

‘Kung Fu Fighting’ is one of the best-selling singles of all time. That’s a little bit frightening :p