18 Best Songs About Fire That Are Smokin’ Hot 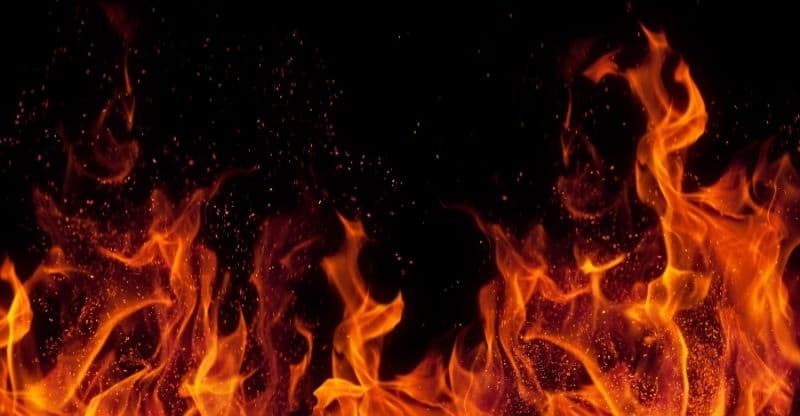 Fire crops up a lot in songs, most often metaphorically.

For example, you can have a ‘fire burning inside of you’ or a ‘burning desire’ (passion) for something.

So, here for your listening pleasure are some of the best songs about fire ever recorded.

A word of caution….some of them get pretty hot!

‘Play With Fire’ by The Rolling Stones

One of the most famous songs about fire, ‘Play With Fire’ started out life as a B side to ‘The Last Time’ but is now considered a highlight of the Stones’ early period.

The lyrics are about a well-heeled, high society woman (something, one imagines, the socialite Jagger knew all about):

Jagger warns her he’s not her little plaything: “don’t play with me, ’cause you’re playing with fire.”

‘Nanker Phelge’ is credited as the writer, an alias used when the entire band wrote a track, despite it only being Keith Richards and Mick Jagger playing.

‘Light My Fire’ by The Doors

A seminal song in the psychedelic rock genre, ‘Light My Fire’ was originally conceived by The Doors’ guitarist Robby Krieger, with various embellishments added by the band (such as Ray Manzarek’ the Bach style organ motif).

Interestingly, Krieger’s inspiration for the lyrics came from the Stones’ ‘Play with Fire’ (see above).

Ed Sullivan didn’t shake their hand after the performance, and they were never invited back. Morrison said after the show: “we just did the Ed Sullivan Show.”

The song is ranked at number 35 on Rolling Stone’s 500 Greatest Songs of All Time.

‘We Didn’t Start the Fire’ by Billy Joel

Each generation inherits the issues of previous generations. That’s the gist of this Billy Joel ’80s classic:

“We didn’t start the fire / It was always burning / Since the world’s been turning.”

In a ‘stream-of-consciousness’ style that’s reminscent of Dylan’s ‘Subterranean Homesick Blues,’ Joel lists an array of people, events, and things both good and bad, with various references to the Cold War (the US vs. Russia) that was a big concern in the ’80s.

Joel has a hard time remembering all the words when he plays it live, and admits to getting help from the audience as they mouth the words.

‘Fire It Up’ by Modest Mouse

From the superb 2007 album, We Were Dead Before The Ship Even Sank, ‘Fire It Up’ is a call to action to get moving in the literal and one suspects figurative way.

There are references to starting up a broken-down vehicle: “our broke down transportation” and “when we fix the carburetor / then we’ll push off once again in an hour or so later.”

In a Rolling Stone interview, singer Isaac Brock was quizzed about the meaning and whether there was a double meaning, as in ‘fire up’ a joint. That wasn’t his intention, he confessed, “But I highly approve of stoners and stoner anthems.”

The brilliant Johnny Marr (of The Smiths) joined Modest Mouse for this album.

‘Who By Fire’ by Leonard Cohen

‘Who by fire’ is based on a Hebrew prayer sung on the Day of Atonement (Yom Kippur). According to the tradition, the Book of Life is opened on this day, and in it are inscribed all those who will live or die this year.

The many ways to die are then cataloged: ‘who by water, who by fire, who by barbiturate. Then, finally, it’s over to you. “Who should I say is calling”?

This is a morbid song to some. To others, it’s a song of hope and a moment for self-reflection. What sort of person are you? When you die and stand at the gates of heaven, “who should I say is calling”?

‘Who By Fire’ appears on Cohen’s brilliant ’70s album ‘New Skin for the Old Ceremony’, a must listen if you don’t know it.

‘Hairdresser on Fire’ by Morrissey

Forever the social commentator, Morrissey’s ‘Hairdresser on Fire’ see him taking a pot shot at those who make their living cutting hair: “You are repressed but you’re remarkably dressed.”

‘On fire’ here translates as ‘fast’ (“Really busy / Busy clippers”) as opposed to being ‘caught on fire’ (I don’t believe he had that much contempt for them!).

One suspects Mozzer has spent a good amount of time at the barbers over the years to keep his signature quiff in check. I love to imagine the small talk he has to endure.

When asked about the meaning of the song, in typical Morrissey fashion, he said to the NME “it’s just a very simple song about trying to get hold of a hairdresser”.

‘Sex on Fire’ by Kings of Leon

This song is about a ‘hot’ encounter with a member of the opposite sex.

In an interview for Q magazine, frontman Caleb Followill said how the song was intended to be “funny” initially: “At first, I was like, ‘That was supposed to be like a funny moment on the album.'”

Good thing they stuck with it. The song’s popularity made them international superstars, earning the band a Grammy and quickly making them festival headliners the world over!

Caleb wrote this song while he was dosed up on painkillers. He was taking them due to a shoulder injury he got from a brawl with one of his brothers.

‘Fire and Rain’ by James Taylor

From his 1970 album Sweet Baby James, the hugely autobiographical ‘Fire and Rain’ chronicles Taylor’s response to the suicide of a close friend, Susanne Schnerr, as well as his struggles with substance abuse and celebrity.

“Just yesterday morning they let me know you were gone / Susanne the plans they made put an end to you.”

It’s also a great song about regret: “But I always thought that I’d see you, baby, one more time again, now.”

We also include this song on our songs about rain playlist.

In a 1972 interview for Rolling Stone, Taylor said he worried the line ‘The plans they made put an end to you’ could be misconstrued by her parents. “‘They’ only meant ‘ye gods’ or basically ‘the Fates.'” he clarified.

‘This Wheel’s on Fire’ by Bob Dylan

Appearing on Bob Dylan and the Bands’ The Basement Tapes and the Music from Big Pink album, ‘This Wheel’s on Fire’ was co-written by Rick Danko (the version here is by Julie Driscoll, Brian Auger & The Trinity).

“This wheel’s on fire / Rolling down the road / Best notify my next of kin / This wheel shall explode.”

Is the wheel a reference to himself, his life, or even his career? (Remember, he was the ‘spokesperson of a generation’ who had ‘betrayed‘ the folk purists by ‘going electric’ in ’66).

“If your memory serves you well” has parallels with Rimbaud’s poem A Season In Hell (“If I remember correctly, my life was a banquet”).

‘Londons Burning’ by The Clash

Named after the nursery rhyme about the Great Fire of London in 1666, ‘London’s Burning’ appeared on their debut album.

It discusses social and racial tensions of the times, the alienation of youth, as well as disgust with the ‘new religion’ (“everybody’s sitting ’round watching television”).

There’s also a nod to their substance of choice (speed) in the line: “I can’t think of a better way to spend the night / Than speeding around underneath the yellow lights”

In contrast to the nihilistic Sex Pistols, The Clash were ‘rebels with a cause’ and musically adventurous playing everything from rock ‘n roll to reggae.

‘Burning Down the House’ by The Talking Heads

Talking Heads’ highest-charting hit single in North America, ‘Burning Down the House’ was their only top ten single in the US (it reached #9).

The story goes that Heads’ drummer Chris Frantz has just seen Parliament-Funkadelic in concert and noticed the crowd chanting ‘burn down the house!’. So he took the idea back to the studio, and the song was born.

Tom Jones and Swedish pop band The Cardigans recorded a version of the song in 1999 which topped the charts in several countries.

‘I’m on Fire’ by Bruce Springsteen

With a Johnny Cash style guitar part and vocals that could be Roy Orbison, ‘I’m on Fire’ is a wonderfully evocative song about a guy’s obsession with a girl. He’s literally ‘on fire’ with desire.

In the video, we see blue-collar mechanic Springsteen infatuated with a high-class female customer who’s come to get her car tuned.

In a nice touch, Johnny Cash later covered this song himself for ‘Badlands: a tribute to Bruce Springsteen’s Nebraska’

‘Firewall’ appears as the first song on their ninth studio album, The People’s Key.

It’s definitely the weirdest song about fire here, with a spoken-word opening from ‘Refried Ice Cream’ guitarist Denny Brewer (who’d been hanging out a lot with frontman Conor Oberst).

When we finally get to the song, it’s a superb downtempo number.

Frontman Oberst and Mike Mogis are both members of the large-scale band Monsters of Folk, including Jim James from My Morning Jacket. In 2009, they performed at Neil Young’s 23rd annual Bridge School Benefit concert.

‘Fire’ by The Jimi Hendrix Experience

‘Fire’ (also called ‘Let Me Light Your Fire’ for its UK release) is another psychedelic rock classic with very unusual rhythms. It’s so raucous you could almost fight fire with it!

The line “move over rover, and let Jimi take over” came from when Hendrix was at bass player Noel Redding’s mum’s house in Folkstone, England. Their dog was hogging the fire, and Jimi asked the mutt to move over.

Hendrix was no stranger to fire, having set fire to his guitar on stage various times (this song was, rather appropriately, the first song he set his guitar alight to while playing).

‘Firestarter’ by The Prodigy

A pumping song about fire from the ’90s here.

The video was shot in the disused Aldwych station in London and was criticized by the fire service as encouraging arson.

However, the lyrics, “I’m the Firestarter. Twisted firestarter” is about stirring up the crowd into a frenzy – not starting actual fires – singer Keith Flint told the Melody Maker.

Keith Flint started out as a dancer for the band, and this was the first single by The Prodigy to feature him on vocals.

‘Ring of Fire’ by Johnny Cash

Cash’s mistress June Carter (and Merle Kilgore) wrote this song about Cash’s wildman ways (he had a serious drum problem). ‘Ring of Fire’ refers to falling in love. It’s thought she took inspiration from an Elizabethan poetry book in which her uncle (A. P. Carter of The Carter Family) had underlined “Love is like a burning ring of fire.”

The song is categorically not about is hemorrhoids, despite Cash himself sometimes cracking hemorrhoid jokes when introducing the song in concert.

One of the biggest hits for Cash, it staying at number one on the US country chart for seven weeks.

Ranked as the 96th greatest song ever by Rolling Stone magazine, it’s one of the best songs about fire (and probably the most well known).

Released in 1957, it sold a million copies in its first 10 days of release in the US.

Actor Dennis Quaid did a convincing job of protraying Lewis in the 1989 biopic ‘Great Balls of Fire’.

‘Beds are Burning’ by Midnight Oil

‘Beds are Burning’ is a song about seeking justice for Australian Aboriginies. The lyrics say it’s time to give the lands back to the Pintupi, an Aboriginal group called the ‘lost tribe.’

Midnight Oil performed it at the closing ceremony of the 2000 Sydney Olympics.

Yuendemu is an aboriginal settlement in Central Australia, 250 kilometres northwest of Alice Springs, mentioned in the phrase “From Kintore East to Yuendemu.”