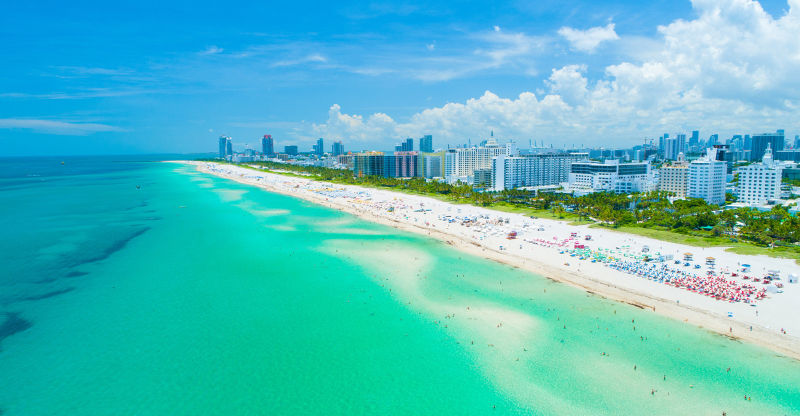 From relaxing waves to exciting amusement parks, sunny Florida is considered by many to be a place of fantasy. It offers a mixture of the American Dream and tropical escapism that makes it a great subject for any work of art—music is no exception.

Here are some of the best songs about Florida that will make you want to take a getaway trip!

The protagonist of this track yearns for the sun and warmth of Florida rather than suffering from the cloudiness of his current life. He sings about the many benefits of the Sunshine State, from its celebrated sports teams to the many water activities that visitors and residents alike can enjoy. He also paints the locals as welcoming and party-loving.

Related: Warm up with this sunshine songs playlist.

This track was written specifically for the 1988 Tom Cruise film Cocktail soundtrack. It talks about two lovers who want to escape life in a tropical place far away, such as the fictional Kokomo “off the Florida Keys.” Kokomo was meant to represent all the tropical paradises worn-out individuals dream of.

Related: Chill out with these beachy songs.

Eric Clapton seems to be singing of a love found in ‘Mainline Florida’ here, a place that seems to be quite boring outside of romantic adventure. The album that the song appears on was recorded at a studio in the state of Florida; its title, 461 Ocean Boulevard, refers to the address Clapton lived at during the recording.

This song’s narrator is excited to get to Florida after heading out on a trip to get there. He wants to meet a nice woman and be good to her as the two lovers enjoy all of the sun and fun that the state has to offer.

Enrique Iglesias and featured artist Pitbull describe a love interest so wonderful that she could get her lover to move to Miami, Florida, in this 2018 track. Both Iglesias and Pitbull are natives of Miami. This was Iglesias’ first English release after the extreme worldwide popularity of 2014’s ‘Bailando,’ which was a Spanish single.

Related: Here are the best songs with cities in the title.

Here’s a track that is romantic and dark at the same time, telling the story of a close couple involved in some shady dealings in Florida. Lana Del Rey was inspired by a documentary when writing the song, which has a different sound and feels from the other tracks released on the album Ultraviolence.

This piece reflects on life—both its good and bad parts—as Jimmy Buffett tells listeners that he is now living a more optimistic life and hoping for a happier, easier future that is as sunny as Florida. This is the title track from Buffett’s album of the same name.

The State of Florida – Less Than Jake

The narrator of this song talks of the many ways that life and the world are being hurt by real estate development in southern Florida. The issues aren’t just related to climate change, although those are the first ones addressed. The divide between individuals due to the industry is also mentioned as a consequence of building cities.

Related: Head over to our playlist of nature music.

Ricky Skaggs is one of the numerous cover artists who have performed this classic Arthur Smith Trio track. It was originally written by Arthur Smith and released in 1937. It’s an instrumental piece; Skaggs’ version appears on the album That’s It, released in 1975.

This song is all about dealing with hurricane season and rushing around, trying to get one’s bearings when a big storm is approaching. It seems that the narrator is not happy about the worry that comes with storms but also feels a sense of relief and renewal when they are over; the excitement also keeps him on his toes.

Related: This song features on our list of songs with hurricane in the lyrics.

Miami 2017 – Billy Joel (Seen the Lights Go Out on Broadway)

Billy Joel paints a picture of a post-apocalyptic New York City in what was the future year 2017 when the song was written. The main character of the track is an older man who has moved to Miami, Florida, to retire after seeing NYC be destroyed. The song was written at a time when New York was facing a great deal of hardships, including financial ones.

This track tells of a young man who disappears, going on the run through the Everglades after facing some kind of brush with the law. His family thinks he is dead, and his love interest marries someone else. The song tells a folksy tale of sorts and shows how complicated life can become if one hurts others and breaks the law.

Related: Sneak over to our breaking the law songs list.

This was based on the viral and humorous memes about “Florida Men,” who often appear in news stories after being caught acting in ridiculous ways. The song paints this behavior as resulting from a curse dating back to early European settlers in the Florida area.

Here, Modest Mouse sings about being unable to escape an unhealthy situation— referred to in the song as ‘Florida.’ The situation could refer to addiction or even one’s own state of mind. It highlights the good sides and bad sides of addictive habits and unhealthy mindsets. It’s also about carrying a large metaphorical weight in one’s mind that seems insurmountable.

Deep Down in Florida – Muddy Waters

The protagonist here plans to go to Florida with the woman he loves. They’ll both enjoy the warm weather and sun. He also plans to visit friends in between the relaxation and leisure his life partner hopes to experience as they begin their new life together in a new paradise.

Related: Start over with our songs about new beginnings playlist.