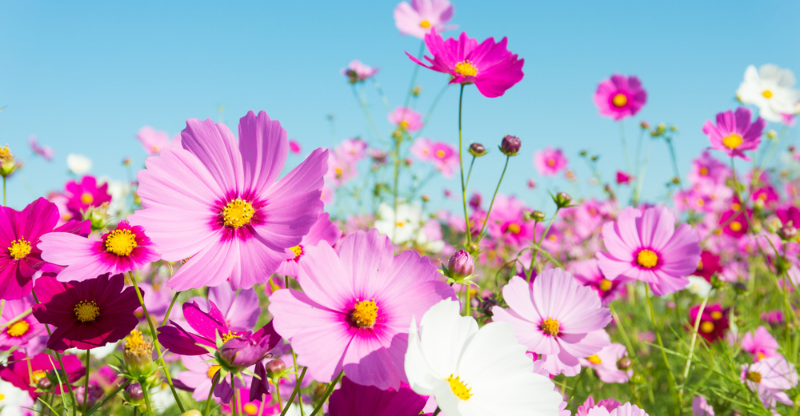 Flowers come in a variety of shapes, sizes, and colors. They represent everything from love to death to the beginning of spring. Since their appeal is wide and their symbolism varied, it’s easy to see why a great number of songs have used flowers to inspire their themes (roses, tulips, daisies, sunflowers, etc.). Here are some of the most interesting songs about flowers for your listening pleasure.

Like stepping into a hot bath, ‘Cheery Blossom Girl’ by French electronic music duo Air is a wonderfully soothing experience (with pan pipes and all). It wonderfully captures that mesmerizing feeling when you meet someone delectable they’re like cherry blossom.

Related: See other classic songs about falling for someone.

Every Rose Has Its Thorn – Poison

This solemn breakup track was inspired by Poison leader Bret Michaels’ experience with infidelity in his relationship. It explains that everyone deals with dark times, and that even the most beautiful of situations can have negative elements you have to face.

This personal song was inspired by the struggles Jon Bon Jovi was experiencing at the time of its writing. He starting writing it on a piano in his hotel room in Los Angeles. The piano was one the hotel used for weddings that Bon Jovi requested to be brought to his room.

Kiss from a Rose – Seal

Seal has only explained this song as being inspired by a relationship. He didn’t even include lyrics with the release, mainly so listeners could resist analysis of the song’s meaning and create their own interpretations.

Build Me Up Buttercup – The Foundations

No list of flower songs is complete without this one. Despite its jovial tone, it’s actually about an untrustworthy and unreliable lover who builds her guy up and then lets him down. It was featured in the film There’s Something About Mary in 1998 as well as the pilot episode of the television series Alias.

This track’s protagonist thinks she can only fall in love in dreams—until she meets a real-life love interest. It is featured in the film Sisterhood of the Traveling Pants. It was released as a song on the film’s soundtrack in 2005.

Ween seems to be exploring romance and mortality all at once in this unusual piece. It stayed on the Australian Singles Chart for an impressive 13 weeks. It is also recommended in the book 1001 Songs You Must Hear Before You Die.

This song could be seen as being about letting go, or about a love affair. It is the first single from Radiohead’s album The King of Limbs, which was released in 2011. Lotus flowers are symbols of Buddhism as well as ideal feminine beauty, both of which can be taken into consideration when interpreting the lyrics.

A guy talks about his lover’s delightful personality in this track. It is one of Grateful Dead’s most well-known songs and one of the band’s most-performed tracks. The song references the book Fellowship of The Ring by J.R.R Tolkien as well as a jeep model by Willys-Overland Motors.

This Post Malone track features Swae Lee. It finds the two singers competing for the same girl, called Sunflower, who stays by the side of both men even though they don’t treat her very well. It was recorded for the animated film Spider-Man: Into The Spider-Verse.

Here’s an emotional piece about staying by a loved one’s side through their darkest days. While the band members considered it to be a bit sappy, it did help Halestorm fund travel for their earliest performances. Lzzy Hale has said that they’d get tip jars up to $250 each time they performed it.

(Nothing but) Flowers – Talking Heads

A post-apocalyptic world free of technology takes center stage in this Talking Heads track. The protagonist is torn between loving the new world and missing the conveniences he took for granted. This was a single from the album Naked, which was to be the band’s last release.

Related: See our playlist of the world’s most famous songs about nature.

This song about staying true to yourself and following your own path was written before the COVID-19 pandemic, but it was released just as the outbreak began, giving it a new meaning for Katy Perry. It now can be seen as a song about finding resilience while pursuing your dreams.

(I Never Promised You A) Rose Garden – Lynn Anderson

Lynn Anderson tells her lover that they need to enjoy the good times and be prepared for the bad in this piece. It was performed by numerous male artists before Anderson made it a crossover hit in 1971. Her cover topped the US Country chart for a total of five weeks after its release.

This song has country influences with a distinctive English character. It’s about a guy talking to his hurtful love interest, Susie, about the ways she hurts him and how he won’t put up with it. Mick Jagger purposely wrote the track to be tongue-in-cheek in a classical country way.

Love Is a Rose – Linda Ronstadt

Neil Young wrote and recorded this song in 1974, but it did not appear on any of his albums until 1978. Linda Ronstadt’s faster, hoe-down take was released in 1975 on the album Prisoner in Disguise. The song talks about a dying love with a picked rose as a metaphor for the fading romance.

This song has biblical inspirations, referring to Eve taking the apple from the Garden of Eden. It’s generally about taking something pure and destroying it. The song was released in three different editions and hit thirteen charts across the world after its release.

Eartha Kitt first sang this song in 1953 for her album The Bad Eartha. Nina Simone, Elkie Brooks, Jeff Buckley, and Katie Melua have covered it since then. It’s about feeling such powerful romantic desire for someone you can’t be with that you turn to destructive habits that help you numb yourself to reality.

Tom Petty encourages someone or a group of people to be free and enjoy life and love in this popular track. It is the opening track of Petty’s album by the same name. A posthumous release of his demo was released in 2020 as a single with an accompanying music video.