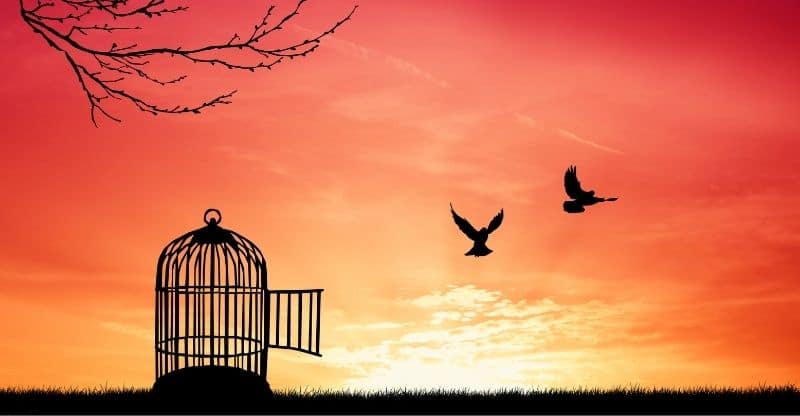 Freedom… isn’t that what we’re all striving for?

Freedom from oppression, freedom from bad relationships, unfaithful partners, or horrible bosses, freedom to make our own choices.

The sad truth is the world is still a messed up place. We still have wars, poverty, social injustice, racism and human rights infringements.

While songs don’t have the power to change the world overnight, they can have a seismic impact on things.

Our Pick of the Best Songs About Freedom

“Redemption Song” by Bob Marley and the Wailers

Bob Marley took inspiration for this song from civil-rights campaigner Marcus Garvey, who said in 1937, “we are going to emancipate ourselves from mental slavery because whilst others might free the body, none but ourselves can free the mind”.

In the song he sings, “emancipate yourself from mental slavery, none but ourselves can free our minds”.

It’s one of the best songs about freedom ever written, and often sung in times of strife when some solidarity is needed (we include it on our songs about injustice article too.)

It’s unusual as it’s just Marley on an acoustic guitar, which is more in the folk tradition than the reggae one. He had done a version with the band, but this now-famous acoustic version was deemed better.

Redemption Song was Marley’s last single before his death on May 11, 1981.

“I Want to Break Free” by Queen

This song, written by bassist John Deacon, is about the women’s liberation movement.

The music video for the song gets more attention than the song however, as the band members all wore drag and parodied a long running UK soap opera, Coronation Street.

The video didn’t go down very well in the US, so much so that MTV actually banned it, which killed the single, and according to Brian May “at that point, we lost America” (referring to US audiences).

In the late ’80s this song became an anti-apartheid anthem for the ANC in South Africa.

It’s still one of the standout music videos of the ’80s.

The radio-edit version of “I Want to Break Free” is slightly longer than the album version on “The Works” (its usually the other way around).

“Human” by The Killers

There has been much debate about the meaning of the chorus, particularly the line “are we human, or are we dancers?”.

According to Flowers, the idea was inspired by gonzo journalist Hunter S. Thompson (who wrote Fear and Loathing in Las Vegas) said “we’re raising a generation of dancers”.

Human was the most-streamed song on Spotify in 2008.

One of a few songs of his without a guitar solo, the lyrics deal with the culture in LA, mentioning places such as Reseda, Mulholland, and Ventura Boulevard.

The protagonist of the song is portrayed as a bit of a swine “I’m a bad boy cause I don’t even miss her, I’m a bad boy for breakin’ her heart”

Whether this is autobiographical, or an observation on Los Angeles culture, who knows. It’s a great song though.

Petty went on to join forces with Jeff Lynne, George Harrison, Roy Orbison and Bob Dylan to form the Traveling Wilburys. Not a bad crowd!

“Get Free” by Lana Del Rey

A sequel to her song Ride, “Get Free” is about freeing yourself from negative mindsets, living your own life, and not playing someone’s game.

It’s really about freeing yourself from the judgments of those around you.

Moving “into the blue” symbolizes her wanting to follow her own heart.

The Out of the black, into the blue line is a nod to Neil Young’s song “My My, Hey Hey (Out of the Blue)”

Another song about letting go of the things that hold us down in life, about freedom and finding peace.

“The sky is the limit, and I just wanna flow, free as a spirit on a journey of hope”.

Its the third US single from Natasha Bedingfield’s third studio album Strip Me.

Bedingfield did a year at the University of Greenwich, where she studied psychology

“Freedom” by Rage Against the Machine

This song is about how the powers that be – governments, corporations, the media (i.e. the ‘machine’) – convince us we are free while exercising total control over us.

The song has been used to fight for the freedom of Leonard Peltier, the American Indian Movement leader who incarcerated for more than 20 years.

Their first self-titled album reached triple platinum status and featured the song “Killing in the Name” that only has eight lines of lyrics!

This song celebrates the concept of free will, freedom of choice, and freedom of thought -what he calls “man’s red flower”.

The premise of the song is that everything is made to be free, and “we choose to believe in where we’re from.”

The song appeared in the movie Despicable Me 3.

“Chimes of Freedom” by Bob Dylan

The song biographer Paul Williams calls “Dylan’s Sermon on the Mount”, Chimes of Freedom was influenced by the symbolist poetry of Arthur Rimbaud, much like his songs of this period (early to mid ”60s), especially Mr. Tamborine Man.

The song is about freedom – not in a political sense, but in a personal sense – and a call to arms to help the downtrodden of this world.

The bells are toiling for us all. “Tolling for the deaf an’ blind, tolling for the mute, for the mistreated, mateless mother, the mistitled prostitute”.

This song has been cited as the moment the protest singer transitions into a pacifist moral poet.

Dylan returned to a similar theme in his song ‘Ring Them Bells’ from his brilliant 1989 album ‘Oh Mercy’.

In in 1993, Dylan played this song live before the Lincoln Memorial for the inauguration of US president Bill Clinton.

“Shout” by Tears for Fears

Another one about establishing our personal freedom.

The writers of the song (frontman Roland Orzabal and keyboard player Ian Stanley) were big fans of Arthur Janov’s Primal Therapy technique (which entails getting people to confront their fears by shouting and screaming).

An interesting aside, many John Lennon songs from the ’70s (e.g. Mother and Working Class Hero – we featured the latter in our list of songs about heroes) were inspired by his experience in primal therapy.

This song “Shout” elicits us to “shout, let it all out, these are the things I can do without.”

The name Tears for Fears came from Arthur Janov’s book Prisoners Of Pain.

Used in countless TV shows and movies from The Simpsons to Forrest Gump, “Free Bird” tells a story about a guy explaining to a girl why he can’t make a commitment and settle down.

Curiously, the song opens with an organ as the lead instrument, despite having three guitarists on board (Allen Collins, Ed King and Gary Rossington).

There is some great guitar playing on show here, including the high-pitched guitar effect that mimics a bird flying.

The album version runs at a staggering 9:08 minutes, with a four minute jam at the end

Rather than his own personal freedom, in this song George Michael reassures someone that “I don’t need your freedom, girl, all I want right now is you”.

This song is about loving someone so much that you’d forgive anything they do. In other words, he or she can do whatever they like, so long as they’re there for you.

“‘Cause baby, you could drag me to hell and back, just as long as we’re together”

Wham! were the first Western pop act to play a concert in China, back in 1985

In this Velvet Underground classic is an almost spiritual celebration of freedom.

But freedom from what?

My guess is it’s drugs. Or rather, drug-induced freedom. As heavy drug takers (especially heroin), lines such as “I’m set free to find a new illusion” certainly points that way.

But like all these songs, it’s open to interpretation.

“Wind of Change” by Scorpions

The song was a huge hit at the time of the falling of the Berlin Wall and offers a sentiment of hope and peace in a period of enormous social change.

In fact, the lyrics were written by singer Klaus Meine following the Scorpion’s visit to the Soviet Union at the height of Perestroika (a political movement for the restructuring of the Soviet Union).

“The world is closing in, did you ever think, that we could be so close, like brothers?”

“Rockin’ in the Free World” by Neil Young

Neil Young’s rocker for political change was released just before the fall of the Berlin Wall, and became an anthem as Eastern Europe enjoyed a new level of freedom.

From the rise of homelessness “people sleeping in their shoes” to ill-conceived foreign policy “don’t feel like Satan, but I am to them”.

Ironically, the song has been picked up by the far right and used as a pro-America anthem, much to Young’s annoyance.

It’s definitely one of the best rock songs about freedom.

The song title came about when rhythm guitarist Frank “Poncho” Sampedro said to Young in conversation “‘Man I guess we’re just gonna have to keep on rockin in the free world.”

The ultimate hedonist song of the ’90s, it equates freedom with getting wasted (“loaded” is slang for taking drugs).

The audio sample from the beginning is from a Peter Fonda B-movie (The Wild Angel) which perfectly captured the essence of the song (and, to be honest, the times).

The song was originally called “I’m Losing More Than I’ll Ever Had” before DJ Andy Weatherall got his hands on it and turned it into the song it is today, with its sumptuous dub reggae bass line and all.

The album the song is from (Screamadelica) won the first ever Mercury Prize for best album.