15 Best Songs about Friday to Get You Pumped Up 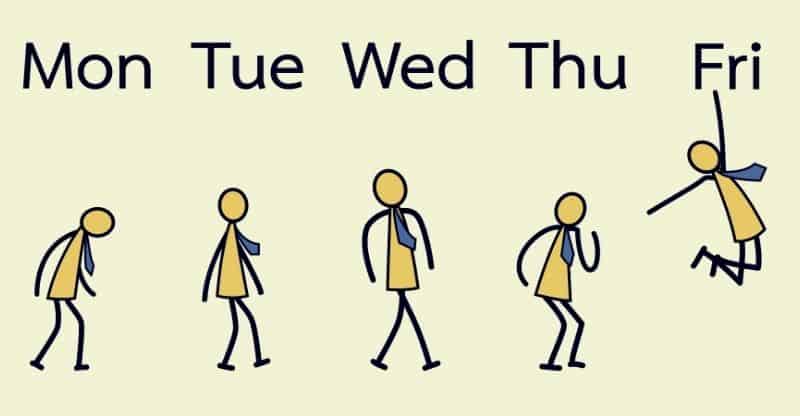 Have you got that Friday feeling? Excellent!

Here are some of the best songs about Friday (and Friday nights, of course) to get you even more pumped!

It’s time to forget about your worries, hang loose, and enjoy yourself. I’m sure that shouldn’t be hard, right? 🙂

This party song captures the carefree vibe and feeling of endless possibilities you get on a Friday. She remembers back to last Friday night, but her memory is blurry, “Yeah, I think we broke the law.”

Perry got the idea for the song after running naked through a forest. ‘T.G.I.F.’ stands for ‘Thank God Its Friday’ if you needed reminding 🙂

Related: this song appears on our songs about night playlist.

If you’re going out clubbing, this is the one to play. It’s all about the anticipation of going out. Sean Paul gives the song a dancehall makeover with some great reggaeton rhythm too.

‘I Got A Feeling’ – Black Eyed Peas

There’s no mention of Friday in this song, but it’s such an AMAZING party tune that it must be included. It’s all about that tingly feeling you get when you know a great night is ahead of you, and you’re going to leave all the stress of the week behind you.

“Hello, Friday, I’ve been waiting for you for a long time / You just save me when my life came tumbling down.”

Another banging party tune here from Flo Rida. The week’s been a shocker (“Thursday just ain’t my luck!”), but now Friday’s here, and he’ll be “ordering triple, seeing double.”

Related: listen to more songs with ‘hello’ in the title.

“‘Cause here comes that familiar feelin’ / That Friday’s famous for.”

Here’s a song about living for the weekends with a bassline inspired by Michael Jackson’s ‘Billie Jean.’ In the video, we see Cee Lo cruising through New York in the back of a car.

‘Friday Is Forever’ – We The Kings

“Friday is forever, we should be together tonight.”

A song about living in the moment, from the British boy band ‘We The Kings.’ The narrator remembers meeting a girl and wondering if what they had on Friday would last forever. “It takes a week to finally find if Friday is forever,” he says.

This ’90s love song is one of the most popular Friday songs ever (especially if you’re into indie music). Writer and singer Robert Smith even admitted it’s “a dumb pop song” but admits it’s great because it’s so absurd.

The opening line, “I don’t care if Monday’s blue,” is a little nod to New Order’s ‘Blue Monday.’

“It’s Friday, Friday, gotta get down on Friday.”

In case you were in any doubt, this song is about Friday! The chorus is pretty much the word repeated over and over, and the lyrics talk about “everybody’s lookin’ forward to the weekend.”

“Friday night and the lights are low / Looking out for a place to go.”

Not a song about Friday exactly, but it’s one of the most famous disco tracks ever and starts with the line ‘Friday night and the lights are low,’ so it’s worthy of consideration!

It’s also one of the best karaoke tunes if that’s your thing.

“We got engaged on a Friday night.”

Ok, let’s get back to partying, shall we?!

“You are pretty colors / Find you in the morning.”

A song about Friday morning here, from indie rockers Khruangbin: this band makes sumptuous sounding ‘ear candy,’ like this primarily instrumental song with vocals (that remind me of Marvin Gaye’s peace anthem, ‘What’s Going On’ – but that could be just me :-)).

“When Black Friday comes / I collect everything I’m owed.”

Nothing to do with that day in late November when companies slash their prices in the build-up to Xmas. This Black Friday is about a moment in history (in 1869, to be precise) when a bunch of greedy investors tried to buy up a load the gold. The government intervened, and they ended up broke (you could say they got their comeuppance.)

We’ve got a whole playlist of songs about greed if you’re interested.

‘Friday on My Mind’ – David Bowie

David Bowie covered this song by The Easybeats on his 1973 album, Pin Ups. It’s a classic tale about anticipating a Friday night when he gets to have fun in the city with his girl.

“The hen party have saved the night / And freed themselves from drunken stags / Having fun and dancing in / A circle round their leather bags.”

Rather than glamourizing his weekend, singer Terry Hall is apathetic about it. He’s bored with this way of life (his use of “paradise” is tongue in cheek) but can’t find anything better. So he finishes the night standing in a taxi queue, miserable! Because the music is so good, it’s still remarkably joyful!

Related: see our pick of songs about the weekend.

Nancy Sinatra (son of Frank) performed this song on the 1967 T.V. special Movin’ With Nancy. With bags of class, it could be straight out of a Tarantino movie (in fact, I’m not entirely sure it isn’t!).

“There was a cloud of dust down Lonesome Road one full moon Friday night.”

A country story about an illegal rave, “there was girls and guys and four-wheel drives and 500 watts of Hank” (Hank = Hank Williams. It’s hardly techno!).

But, he admits, “I sure have done my share of raisin’ hell, and I ain’t too old to raise it with y’all then he let out a rebel yell.”

So he joins in with them. That’s the spirit old boy!