13 Songs About Friendship That Remind You How Important Friends Are 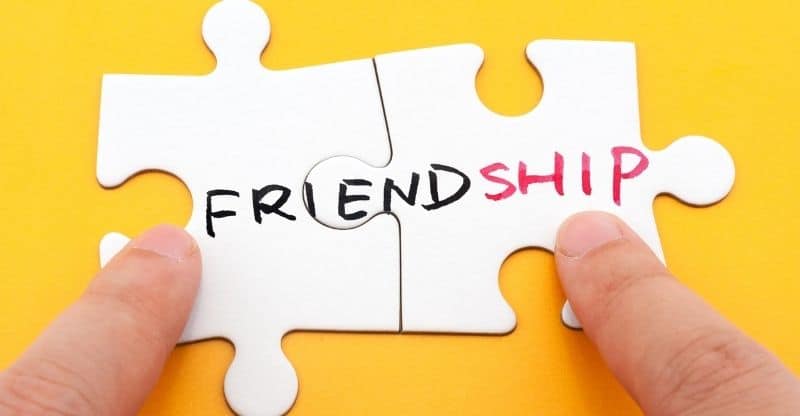 Friendship is a peculiar and miraculous thing.

With romantic relationships, there’s a biological explanation (furthering our genes, procreation, etc.). But with friendship, it’s all platonic, with no ‘obvious’ benefit.

True friends are there for you come rain or shine. They can lift you up when you’re down, or tear you right down when you’re full of yourself.

But its not all take, take take. Being a good friend feels amazing too and brings out the best version of you. This was what Bruno Mars is getting at when he sings “we find out what we’re made of, when we are called to help our friends in need”.

So….you’d think there’d be a lot of songs written about this magical relationship, then? There are a gazillion songs about love, but tunes celebrating friendship? Not so many.

However, as you’re about to find out, it’s not all about quantity. There are some truly fantastic songs about friendship.

With a Little Help From My Friends by The Beatles

We have to start with arguably the most well-known song about friendship, With a Little Help From My Friends by The Beatles.

The second track from their concept album Sgt. Pepper’s Lonely Hearts Club Band with the iconic sleeve, and leads on from the opening title track with no break (they are cross-faded with pre-recorded applause).

It’s sung by Ringo Starr as the fictional character Billy Shears (his alter ego in Sgt. Pepper’s band) – Ringo is never particularly melodic, but his frail voice fits the song quite perfectly.

“How do I feel by the end of the day? Are you sad because you’re on your own? No, I get by with a little help from my friends”

Thank You for Being a Friend by Andrew Gold

According to Gold, “Thank You for Being a Friend” was just this little throwaway thing that took him “about an hour to write”

A productive hour then!

The song has managed to etch its way into the collective psyche, and anyone over the age of 40 will definitely know it (and many young ‘uns too).

If you’ve watched a lot of ’80s TV, you’ll immediately recognise this as the Golden Girls theme song.

Cheesy lyrics? You bet. With pearlers such as ‘If it’s a car you lack, I’d surely buy you a Cadillac’, it’s no lyrical tour-de-force.

But hey, no one minds you getting all soppy about your best buddy.

And a mate who’s happy to buy you a Cadillac? That’s a friend indeed!

You’re My Best Friend by Queen

Can your other half be your best friend?

You’re My Best Friend was written by Queen bassist John Deacon, who wrote this three-minute pop song about his wife.

The quiet man of the group, Leicester-born Deacon wrote a few gems such as this and Another One Bites the Dust. Unlike guitarist Brian May and drummer Roger Taylor who continue playing under the Queen moniker with singer Adam Lambert, Deacon has since retired.

If you read the lyrics of this song, it’s easy to see why. He’s happy at home with his best friend. Awww.

“In rain or shine, you’ve stood by me girl, I’m happy at home (happy at home), You’re my best friend”.

You’ve Got a Friend by Carole King / James Taylor

Another classic, You’ve Got a Friend was written by Carole King and featured on her Tapestry album, and later a hit for James Taylor.

Many friend songs are about thanking a friend for being there. This one is a bit different though, and is written from the friends perspective to say “I’m here for you”.

As such, the lyrics are deeply reassuring and are said to have helped many people who are feeling down. In fact, the song was said to have lifted James Taylor out of depression when he first heard it.

It’s easy to see why the song is so popular, with its theme of friendship without boundaries and a friend being there when you are in need. We all need a bit of that reassurance sometimes.

Old Friends is another marvelous ditty by arguably the greatest pop duo of our time (name a better one?), Simon and Garfunkel.

Like all their songs it’s beautifully written, with some gorgeous imagery “on a park bench like bookends”. The concept of bookends is even more powerful when you consider bookends hold stories between them.

The lyrics flit from a young man’s point of view, who looks to the future with bewilderment “how terribly strange to be seventy” to old men looking back “time it was, and what a time it was, it was, a time of innocence, a time of confidences”.

“Preserve your memories, they’re all that’s left you”.

Hold on To Your Friends by Morrissey

Morrissey is cynical of most things, whether that’s our consumption of meat, our fixation with the Royal Family, or more recently, the intrusiveness of mainstream media

The one thing he unquestionably, irrevocably, supports? Friendship.

Because it’s Morrissey, the writing is divine. “Give up your job, squander your cash – be rash, just hold on to your friends”.

Hold on To Your Friends featured on Morrissey’s acclaimed solo album Vauxhall and I. Check out the video below, where we see him hanging out with friends (who, rather bizarrely, all look like him).

“Be mad, be rash, smoke and explode, sell all of your clothes, just bear in mind: There just might come a time, when you need some friends”

Lean on Me by Bill Withers

Lean on Me has since become an anthem for people in strife, and is a celebration of togetherness and resilience when times are tough.

“Lean on me, when you’re not strong, and I’ll be your friend, I’ll help you carry on”

It’s also one of the easiest first piano songs to play because you don’t have to change fingers (you just go up and down the keyboard with your fingers in the same position).

You’ve Got a Friend in Me by Randy Newman

The theme song for the kids movie Toy Story, You’ve Got a Friend in Me is a sweet song with an old-worldly feel like something out of the 1950s.

“As the years go by, Our friendship will never die”.

Written by Elton John and Bernie Taupin for the 1971 movie Friends (not to be confused with the hit TV show). The movie has long since been forgotten, but the song stands on its own two feet.

If you’ve ever left your home town for any significant amount of time (there are some great songs about home by the way), you’ll know one of the toughest things is leaving behind your friends.

The song offers some reassurance that new friends “are found on every road” but equally how childhood and the age of innocence so quickly pass us by.

“It seems to me a crime that we should age, these fragile times should never slip us by, a time you never can or shall erase, as friends together watch their childhood fly”

I’ll be There For You by The Rembrandts

While we’re talking about the hit TV show, we had to mention the theme tune from the show Friends, I’ll Be There For You.

The song is so inextricably linked with the show that it’s almost impossible to listen to the song itself (I’m sure the Rembrandts aren’t complaining though from the royalties they’ve received).

Judging the song on its own merits, it’s actually a well-written piece of music with some funny one-liners you probably hadn’t picked up such as “Your job’s a joke, you’re broke, your love life’s DOA”

The chorus is a pretty convincing friendship pact too:

Count on Me by Bruno Mars

From Bruno Mars’ debut EP, It’s Better If You Don’t Understand, Count on Me is a folk / tropical song with a reggae vibe. It also has overtones of “Over the Rainbow” by Israel Kamakawiwoʻole and is something you could imagine Jack Johnson writing.

It includes this superb line: “We find out what we’re made of, when we are called to help our friends in need”.

It reminds us that best friends help each other in moments of strife, which in turn, reveals the real us. Pretty deep!

We’re Going to Be Friends by The White Stripes

We haven’t mentioned yet the place where many of our first friendships are formed: school

The song tells the story of the beginning of a school year and meeting a new friend (the fictional Suzy Lee who crops up a bit in White Stripes mythology). It successfully evokes the nostalgia of childhood and the innocence of school days.

We’re Going to Be Friends has also been covered by Jack Johnson and is, rather randomly, Conan O’Brien’s favorite White Stripes song. Meg and Jack appeared on the final episode of Late Night with Conan O’Brien and played it for him.

“Fall is here, hear the yell, back to school, ring the bell, brand new shoes, walking blues, climb the fence, books and pens, I can tell that we are gonna be friends”

Friends Will Be Friends by Queen

I know, I know, it’s the second song on the list by Queen, but it has to be here

Why? Because it’s one of the best friendship songs. Period.

“When you’re through with life and all hope is lost, hold out your hand ’cause friends will be friends, right till the end”

Like all their work, the harmonies are impeccable, the progression is wonderful, the vocals are stunning, and the blistering guitar solo is May at his best (without doubt one of the best guitarists ever).

It’s especially poignant as Freddy Mercury didn’t have long left, and by all accounts his bandmates really were there for him right till the end.

As I’m sure you agree, friendship is to be treasured. Real friends are friends forever – they don’t come along too often, so value the ones you do have.

If it’s been a while since you last spoke to your closest friends, pick up the phone and give them a call! Enough with the occasional text already.