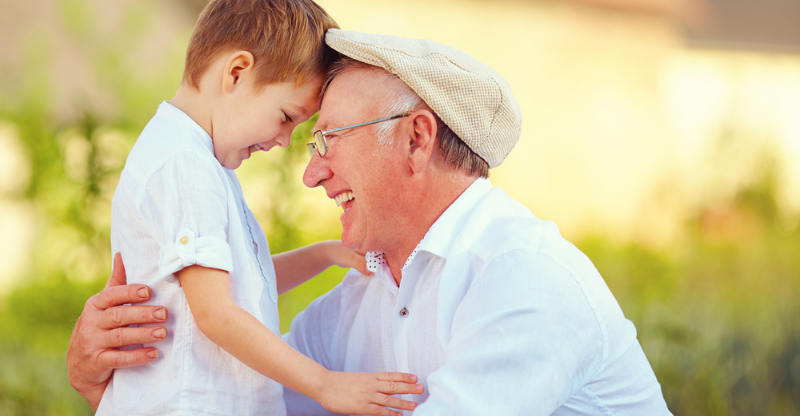 For some people, grandfathers are a big influence in life. Those lucky enough to know their grandparents while growing up may recall fond summer memories spent at their house and Sunday dinners with multiple generations sitting at one table.

Even if you didn’t know Grandpa (or Granddad, or Papa, or whatever you call him), you probably know him through stories. Or perhaps you had a grandfather figure who might as well have been your grandpappy!

From telling stories about learning how to fish to trying to make sense of the world with your grandpa, here is a poignant list of songs about grandfathers.

Jamey Johnson is an official member of the Grand Ole Opry, but it all started with his hit single, ‘In Color.’ Written as a conversation between grandfather and grandchild, Johnson takes the listener on a journey through the grandfather’s incredible life via a photo album full of black and white pictures. His memories are described throughout the song in vivid detail, from his time spent overseas to the day he married his sweetheart.

Related: Check out these great songs with colors in the title.

Ed Sheeran uses his ability to write comforting songs about tough topics with ‘Afire Love.’ He was very close with his grandfather, and he penned this heartfelt tune for him. His grandfather had Alzheimer’s for a long time before passing, though he never let it shake his strong Catholic faith. Since his passing, Sheeran often pays tribute to him when he is in the spotlight.

Grandpa (Tell Me ‘Bout the Good Old Days) – The Judds

Though The Judds are all about family, theirs, like the rest, is far from perfect. Their home life could be full of turmoil, but it wasn’t always bad. Their grandfathers had their own unique legacies, and despite issues in the past, they wanted to release a tune that honored them. The first time this song was pitched to them, their eyes filled with tears, and they knew they had to record it.

Related: Celebrate every branch of the family tree with the best family songs.

This Austrian toe-tapper tells the story of “Old Man Santiago,” a fisherman with one or two wild stories to tell. The song centers around Santiago and his struggle to take down an infamous marlin he develops a taste for. He tries to catch it for days to no avail until finally, after the shark fights and the near destruction of his boat, he comes home with the big one.

Related: Splash over to the best songs about the ocean.

Grandpa Told Me So – Kenny Chesney

This early Kenny Chesney tune was released as a single in ’95. It tells a story men can relate to about the wisdom grandfathers can instill in their grandchildren. From teaching them how to swim to reminding them to be fearless in life, Chesney’s song is full of little nuggets many can remember learning from their own grandfathers.

Related: Be brave with these songs about strength and courage.

Country singer Justin Moore co-wrote this beautiful country song in honor of his grandfathers and their impact on him growing up. After recording the song, he sent CDs of the song to both his grandparents (they couldn’t figure out how to open an mp3 file). Moore has said in previous interviews after they listened to the recording that it’s one of the only times he’s seen them cry.

Related: Head over to our playlist of the best crying songs.

He Walked on Water – Randy Travis

Randy Travis’ popular 1990 ballad ‘He Walked on Water’ reached number two in the US and number one in Canada on the music charts. The stirring tune tells the story of a young boy’s infatuation with his grandfather, a brave, strong cowboy. This was the first single ever to be cut by acclaimed Nashville songwriter Allen Shamblin.

Related: Corral yourself over to our playlist of the best songs about cowboys.

Jimmy Buffett keeps things light and cheeky with his tribute to the first men to walk on the moon with ‘The Rocket That Grandpa Rode.’ In the song, he talks of “July 1969,” when Americans sent astronauts Neil Armstrong and Buzz Aldrin into space to be the first ones to land on the moon. After describing where he watched liftoff that day, he comedically thanks a few who helped out, including Mr. Spock and Captain Kirk.

Related: Travel to the moon with these songs about moonlight.

Riley Green kicks the tried-and-true country song formula up a notch with his instant classic ‘I Wish Grandpas Never Died.’ His song is about the quintessential country life, from riding around small-town roads in a pickup truck to Friday night football games. Green uses image-filled lyrics to drive home his wish that life wouldn’t get so complicated.

You Raise Me Up – Josh Groban

Although this Norwegian song first gained popularity in Ireland, America embraced the song after singer Josh Grobin performed it on a charity special for the US singing contest show American Idol. Originally just an instrumental, lyrics were later added by Irish writer Brendan Graham at the request of the song’s composer, Rolf Loveland.

Country songwriter Cody Johnson wrote this poignant tune about a conversation he wishes he could have with his late grandfather. He weaves in philosophical lines and compares his grandpa to men like John Wayne as he tells him how much the world has changed. Johnson is known for his original moving work with songs like this one, ‘Til You Can’t,’ and ‘Dear Rodeo.’

Kyle Bennett sings about his great grandfather’s legacy in ‘Granddaddy’s Song.’ Bennett tells the listener he grew up when times were tough during America’s Great Depression. Despite his hardships, he made a life for himself, fell in love, and raised good kids. Bennett includes wisdom, toughness, and temperance lessons he learned and sings about them throughout the chorus.

Related: Keep going with our playlist of songs about survival.

I’m My Own Grandpa – Willie Nelson

Many grandpa songs are country songs, but this one isn’t like the others! Inspired by a Mark Twain story that details how a man could somehow become his own grandfather, a popular radio group in the ’30s known as “The Jesters” wrote this novelty song documenting the process. Willie heard it, had a good laugh, and recorded it for his 2001 album. The popular song has been recorded by many other good-humored artists as well.

John Denver’s ‘Grandma’s Feather Bed’ gives listeners a personal look into why he loved adding elements of nature to his songwriting. Reminiscing about his childhood spent on his grandparent’s farm, they would build fires, go fishing, and cook Sunday feasts while enjoying the great outdoors. These themes of living off the land would often serve as inspiration for Denver while songwriting.

Related: Appreciate the world with the best songs about nature.

Gail Davies was truly a one-woman show during this song’s recording. Not only did she write it, but she recorded it herself and sang on the track. ‘Grandma’s Song’ is a tribute to her grandmother, who had a significant influence on her life. Davies even includes a sample of her grandmother singing at the beginning of the track.

Experiencing her own familial battle with dementia, when Carrie Underwood heard the song ‘Forever Changed,’ she knew she had to record it. It hit home for her. It’s a touching ballad about a woman’s struggle with Alzheimer’s as her daughter tries to make sense of it. Though she recorded it, she has said in interviews before she doubts she could ever perform it live because she would get too emotional.

Related: Need help with self-development? Listen to these songs about personal growth.

When I Get Where I’m Going – Brad Paisley ft. Dolly Parton

Country royalty Dolly Parton adds her soaring vocals to Brad Paisley’s tear-jerker of a tune, ‘When I Get Where I’m Going.’ Parton’s faith is often a theme she includes in her original music, and Paisley adopts it for their duet. The song features them speculating on what the day will be like when they finally reach heaven.

Related: Find comfort with some going to heaven songs.

If Heaven Wasn’t So Far Away – Justin Moore

Justin Moore is known in country music for tackling emotional subjects. He has written and recorded songs about the battles soldiers face on and off the field and the heartache of toxic relationships. Adding to that list is his award-winning song ‘If Heaven Wasn’t So Far Away.’ He sings about family closeness and how he’d take his kids to visit their grandparents every chance he got if only “heaven wasn’t so far away.”

If you’re looking for some dark humor coupled with a good story, look no further than songwriter/comedian Stephen Lynch’s ‘Grandfather.’ Lynch is expecting quite the inheritance, so he comedically lays out all the ways he could usher his grandfather’s transition into the next life along. Next, he decides to start working on Grandma.

Related: Get rich with these songs about making money.

That’s What Grandpas Do – Gord Bamford

Try not to get emotional listening to Gord Bamford’s gut-wrenching tribute to grandfathers with ‘That’s What Grandpas Do.’ The song begins with Bamford remembering watching and playing football with his grandfather. The years go on, and they create countless memories together. But towards the end of the song, the end is near for his grandpa. He reminds the listener to love your grandfather while you still can because “that’s what grandpas do.”

Related: Relive the good old days with our playlist of sentimental songs.

They Don’t Make Em’ Like That Anymore – Jason Blaine

Jason Blaine’s grandfather only uses cash when paying, still rocks Elvis’s hair, and worships country star Alan Jackson in his song ‘They Don’t Make Em’ Like That Anymore.’ Drawing on past experiences and his larger-than-life grandfather, he honors him by reminding listeners that sometimes doing things the old way is still the better way.

Alt-country songwriter Sturgill Simpson has hit a few bumps in the road to success. He had publicly stated before that his grandfather was always there for him, no matter what. Simpson even had him record an intro for his album, Metamodern Sounds. In his lovely song ‘Hero,’ he pays tribute to the man who has always been the biggest influence in his life.

Related: Here’s our playlist of the best songs about heroes.

The Grandpa That I Know – Patty Loveless

In ‘The Grandpa That I Know,’ Patti Loveless pays tribute to her farmer-grandfather, who worked every day of his life on his land, sowing seeds and putting food on tables. At his funeral, it’s hard to recognize him in the fancy suit they have him dressed up in. She worries if Jesus will recognize him as she realizes the whole affair doesn’t fit the grandpa she knew and loved. It’s the perfect song to play at your grandpa’s funeral if he happened to be a farmer, too.