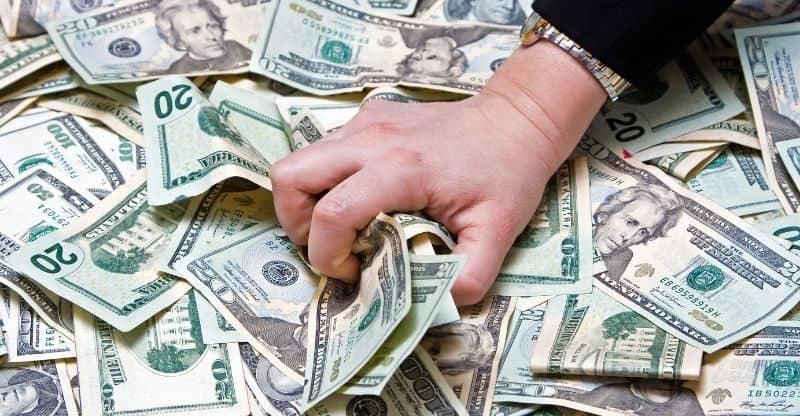 One of human’s less noble characteristics is our tendency to want more than our fair share. Yes, greed has lead to war, destruction, famine, and just about every other ill you can think of.

It gets called out in the bible too. In Roman Catholic theology, greed (or covetousness) is one of the ‘seven deadly sins’ – the seven vices that lead to immoral behaviour.

To help us appreciate this human flaw, here are the best songs about greed that capture it perfectly.

Queen’s anthemic song perfectly captures how we want our cake and eat it too. We don’t just want our bit, we want it all. And not later, but now! (lack of patience isn’t particularly saintly, either).

Writer of the song Brian May puts a positive spin on it. He claims it’s about being ambitious and fighting for one’s own goals.

Hmm, he has a point. However, the quote from motivational speaker Zig Ziglar springs to mind, “You can have everything in life you want if you will just help other people get what they want.”

I’m sure Brian would agree, he’s a lovely chap.

The wonderfully titled ‘Give Give Give Me More More More’ appeared on The Wonderstuff’s eponymous LP, The Eight Legged Groove Machine.

It’s a song about the selfish pursuit of things. The narrator wants his “trousers pressed and my shoes, shined up by a rich girl”.

His love of money is a little sad. His main concern is whether the bank is big enough!

This ghostly song tells a story about a certain Lady Howard from Tavistock who’s killed by her lover, and then haunts him for the rest of his life. Sound like he got his comeuppance!

It’s probably not a bad song for Halloween either.

The song is about opting out of an ethically and morally bankrupt society. He challenges the notion that we need more things to give meaning to our lives. This just enslaves us to the system.

‘I Wanted Everything’ – The Ramones

A song that covers the arc of a person’s life, consumed by greed.

We start with his poor childhood when all he could dream about were the “presents under a Christmas tree”, then to his working on a truck when he gets “no tip for delivery”, and finally to when he turns criminal and robs a bank.

But alas, “there’s no success for me, involved in a robbery”.

Here’s a song from the Velvet Underground’s John Cale. It’s a post-colonial critique about the settlers’ pursuit of gold in South Africa in the early 1900s (Transvaal was a province in South Africa.)

They were so greedy, “they would have played all night, even with loaded dice”. But the goldmines had the last laugh, “it’s gold that eats the heart away and leaves
the bones, to dry.”

It’s one of the songs about greed on this list.

This angry song is a scathing attack on the greed culture of the Thatcher years in the 90s. Much of it still holds true today, as The Guardian alludes to.

Singer Jaz Coleman goes on a rant about the governing elite, “ten percent of the rest, is the hand that pulls the strings”, while the poor struggle just to put food on the table, “exchanging the hours of your life for the cash you’ve already spent”.

It’s one of the most powerful songs about social inequality and the need for change you’ll ever hear.

From Dylan’s brilliant (and much underrated) Oh Mercy! album, ‘Disease of Conceit’ is about moral corruption and delusions of grandeur (the definition of conceit is ‘excessive pride in oneself’).

Though no names are given, the song is partly inspired by a succession of televangelist in the ’80s who got into trouble with claims of immoral sexual behaviour.

Here’s an environmentalist song about not taking things for granted (like the nature around us) and then missing them when they’re gone. Too late, you “paved paradise”.

The idea for the tree museum line is based on an actual tree museum (Foster Gardens, in Waikiki) where people “pay just to see them”.

There’s also a call for farmers to stop using ‘DDTs’ (an insecticide known for its environmental impact).

‘Calling To You’ – Robert Plant

Humans have an incessant desire to break new ground, conquer new horizons, and get new things. We never stop exploring – whether that’s our own planet, our own biology (biophysics), or outer space.

This inquisitiveness has done us proud as a species, but greed and human destructiveness are the ugly flip side of the coin.

That’s the subject of this song. What’s the thing doing the calling? That’s for you to decide.

In the fade-out, we hear Plant sing “Oh, Jimmy”, is this a reference to his ex-bandmate Jimmy Page?

Ex Pink Floyd member Roger Waters has been singing about the ills of greed for decades. We heard his scathing attack of the businessmen in ‘Dogs’ on the album Animals (we feature it in our songs about betrayal playlist).

‘Déjà Vu’ – previously known ‘Lay Down Jerusalem (If I Had Been God)’ – is a more recent meditation on greed. It’s just as vitriolic.

Here, he dismays at the people’s election choices in the US, “you lean to the left but you walk to the right”. Greed is abundant still (“bankers get fat”), and below him, as he flies in the gulf stream, “there’s ninety-nine cents worth of drunkards and fools”.

Talking about this song, ex Smith member Johnny Marr told the NME, it’s “specifically talking about property developers and those kinds of characters who are turning everything into a car park.”

Marr also guested on the Talking Heads song ‘Nothing But Flowers’, another one about over industrialization.

To many, the car you drive is a status symbol. Drive a 15-year-old, beaten-up Vauxhall Astra (as I do), and you have no street cred. Drive a brand new Range Rover Evoque with 20″ tires, and you’re a member of the elite.

In this witty song about cars, Janis Joplin laments “all my friends have Porsches, I must make amends”. She thinks a Merc could be the answer to all her prayers. She wouldn’t be the first.

Here’s one all about the dollar bill. It’s a song that highlights our obsession with making more money.

This send-up of capitalist culture (and a satire of Thatcherism) was probably lost on many listeners in the ’80s when consumer-capitalist was at its highest. People probably admired Gordon Gekko (the ruthless financier played by Michael Douglas) while they watched the movie Wall Street!

‘Piggies’ is a critique of the ruling classes, written by George Harrison who, like all the Beatles, grew up in a very working-class environment.

The song is of historical relevance for another more macabre reason. When a crazed Charles Manson murdered Sharon Tate, the LaBianca’s and others in the late ’60s, the words ‘pig and piggy’ were written with the victims’ blood on the walls.

Not to be confused with the song by Steve Miller Band of the same name (which is great too).

‘Take the Money and Run’ is, according to David Crosby in an interview for Johnny Rogan’s Complete Guide To The Music of CSN&Y, “about people who don’t give a damn about anything but the money”. ‘Cash rules’, they think.

Well, there’s a fair few of those type of people out there.

Money isn’t everything. How many times have you heard that said? When he hear it, we roll our eyes, “yeah, right”.

In this critique of consumerism and money (one of the best pop songs on the subject), the late, great Prince reminds us money comes and goes, but what’s important is “making sure your soul’s alright”.

We all need to heed his words.