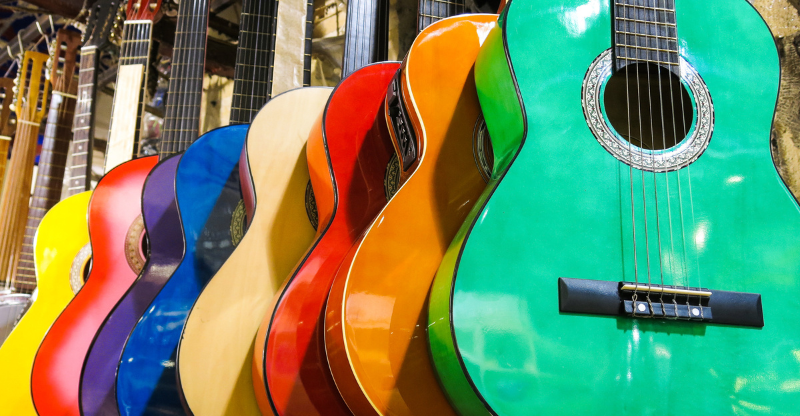 Musicians and songwriters have always felt especially connected to their instruments.

The rock and roll renaissance of the ’70s, which often featured guitarists as frontmen rather than vocalists, became a new phenomenon. The archetypal rock star with an electric guitar in his hand surrounded by adoring women is an enduring image associated with modern music.

All of these intricacies weave their way into songs bands and artists write. Featuring rockers across generations, check out this playlist of the best songs about guitars.

While My Guitar Gently Weeps – The Beatles

Paul McCartney and John Lennon usually got songwriting credit for the tracks included in The Beatles albums. But for ‘While My Guitar Gently Weeps,’ George Harrison was the mastermind behind the lyrics. Written during a tumultuous time for the band, Harrison brought Eric Clapton to the studio to record guitar and ease tension in the room. For this particular recording, Clapton used his trusty old Les Paul.

Related: Hear this song on our list of the best songs of peace.

When Denver was young, he turned to music as a refuge from a lonely life spent moving around a lot due to his father’s career in the military. His grandmother gave him her acoustic Gibson jazz-style guitar she loved to play as a symbol of comfort. The gift became one of his most prized possessions, and ‘This Old Guitar’ was written to honor it. When he died in a small plane crash in ’97, the guitar was cremated with him.

Referencing a style of guitar popular in country and western music, Cash’s ‘Tennessee Flat Top Box’ tells the story of a young boy with an almost superhuman ability to play the stringed instrument. The women are crazy for him due to his talent, and they travel far and wide to see him play. He suddenly disappears from the music scene, only to re-emerge later better than ever on TV’s most popular entertainment shows.

Anyone Can Play Guitar – Radiohead

“I’d rather idolize someone like Elvis Costello than I would Steve Vai.” This quote comes from an interview with Radiohead guitarist Johnny Greenwood in answer to a question about their song ‘Anyone Can Play Guitar.’ Both he and Thom Yorke criticize society’s obsession with rock stars as idols, especially guitarists. For the recording, they had laymen on staff play guitar in the studio, and then they cut it up for the final production.

With a feel like a folklore legend, the protagonist of this story walks into an unassuming pawn shop and finds a beat-up guitar that he falls in love with while testing it out. His insane playing skills grant him the nickname, ‘Mind Bender.’ Stillwater combined the popular southern rock genre of the ’70s with traditional folk elements. This tune was one of their most popular numbers. In ’78, it charted in the top 100 for single releases.

My Guitar Lies Bleeding in My Arms – Bon Jovi

“Since you went away, I sing this song to you wherever you are.” One of Bon Jovi’s more underrated tunes, the emotive ‘My Guitar Lies Bleeding in My Arms’ tells the tale of a man finding himself all alone after a failed relationship. Though the song takes on a bit of a depressing tone due to the nature of the story, it’s a beautiful track that is a fan favorite.

Related: Shed a few tears while you listen to this breaking up music.

A reference to rock and roll guitarists of the ’70s who developed a penchant for smashing guitars on stage so the crowd would go wild, John Hiatt’s ‘Perfectly Good Guitar’ tries to teach them a lesson. The tune follows a man who destroyed his fair share of axes, only to be left without a six-string to strum in his old age.

Dedicated to “The Guitar Man,” the main driver of live music ticket sales of the ’70s, Bread’s ’72 release details the important relationship between rock star guitarists and their adoring supporters. The vocal lines are woven around the guitar work of Larry Knechtel, who utilized the timely sounds of a wah-wah pedal for the solos.

“The old man finally got up. Said, ‘Where in the hell you been?'” A haunting tale encompasses Guy Clark’s ‘The Guitar,’ a spooky narrative about a man who visits a random pawn shop and decides to try out an old, dusty acoustic guitar. When he plays like never before, a riveting plot twist takes place after he decides to purchase the instrument. Take a listen to the song to find out how the story ends. You won’t be disappointed.

“You’ve gotta take that E string, Hank, and turn it down. You’ve gotta have that halftime beat that walks around.” A tribute to country music outlaw Waylon Jennings after he passed away, Hank Williams Jr.’s ‘Waylon’s Guitar’ chronicles the important lessons the songwriter taught him while he worked on getting out of his father, Hank Williams Sr.’s musical shadow.

A spiritual song on Springsteens’ sixth studio album, ‘House of a Thousand Guitars’ is a poetic metaphor describing a place people can go to forget their worries. The songwriter uses a message of unity in the lyrics, stating that people of all kinds, with all different types of problems, can be healed through the power of music.

Related: You can feel the power of unity in these come together songs.

Written as a cheeky take on guys who try to learn how to play guitar so they can pick up women, ‘Play Guitar’ was one of the first singles John Mellencamp released after he dropped the pen name “John Cougar,” one he originally had to adopt at the firm request of his label. Appearing on his ’83 album, Uh-Huh, this single, among a few others on the project, marked the start of more serious hits for the songwriter.

After his massive success with the rock band The Who, Pete Townshend struck out on his own and had a successful solo career as well. His song ‘Sheraton Gibson’ was written about his time spent in Cleveland, Ohio. He wrote the track after hanging out with The James Gang, a popular blue-eyed-soul group headed up by Joe Walsh, for the day.

While searching for songs to fill out another one of his soundtrack releases for his various films, Elvis came across a Jerry Reed tune called ‘Guitar Man.’ Elvis fell in love with the story, which details a guy who quits his job and travels around the south trying to find a rock band to head up, and recorded it for the soundtrack to his Clambake film.

Bandmates Mick Jones and Lou Gramm collaborated for Foreigner’s ‘Juke Box Hero’ after a particularly inspiring experience with a fan. While on tour, for one of their shows, the weather was so bad that only one fan could power through it. They were so moved by his dedication, they showed him around backstage. The song begins referring to the fan, then tells the story of a young man learning about the power a guitar can hold.

Related: This song features on our playlist of underdog songs.

This epic, or “suite” in music terminology, is Rush’s longest release. It was also the project that put them on the map. Fans were enamored with the band’s 20-minute science fiction story, which features a man caught between different worlds. The song’s long length and subject matter were symbolic protests against the industry, which liked to micro-manage the length and content of popular music released.

Released posthumously, rapper Nas collaborated on this sentimental Amy Winehouse track. ‘Cherry’ is named after her beloved guitar. The song personifies Cherry and Winehouse sings about her as if she were real. Nas included the catchy, feel-good tune on his album Life is Good.

Teardrops on My Guitar – Taylor Swift

One of several hits from Taylor Swift’s debut album, ‘Teardrops on My Guitar’ centers around unrequited love, a subject Swift often likes to tackle in her songwriting. In the song, she is sweet on a boy at school named Drew, but he doesn’t feel the same way and has a girlfriend. Knowing she can’t act on her feelings, Swift turns to her guitar for comfort.

Related: Here are the best songs to cry to.

Guitar virtuoso Chet Atkins paired up with Dire Straits mastermind Mark Knopfler for their updated rendition of ‘Yakety Sax.’ Originally published in the ’60s, it was considered saxophonist Boots Randolph’s signature song. But when Atkins and Knopfler got a hold of it, they updated the rousing instrumental and renamed it ‘Yakety Axe,’ after their guitars.

Related: You can hear ‘Yakety Sax’ on our list of the best funny songs.

Punk rock royalty Joe Strummer tackles vices of the industry with The Clash’s ‘Jail Guitar Doors.’ The title replaces “house” with “guitar” to signify all the trouble musicians can get into when living the life of a rock star. The lyrics center around a guitarist who eventually ends up in the slammer due to possession and has to watch his dreams vanish from behind bars.

Related: Spend your sentence listening to these songs about going to jail.