23 Best Songs about Having a Baby for Expectant Parents 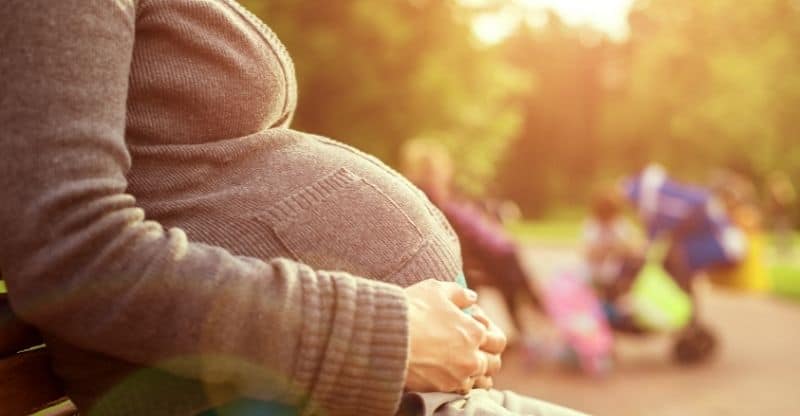 Becoming a parent is a life-changing experience, and many see it as a miracle or a sweet gift from God. Parenthood brings a whole new set of challenges, and it shapes you into a completely different person.

If you know someone who’s pregnant, or you are expecting a baby yourself – congrats! What better way to celebrate than with a playlist that’s filled with songs about having a baby. Let’s dive in!

Bringing a new person into the world is definitely life-altering. In ‘Lullaby’, the narrator sings about the kind of love and innocence that parenthood brings. This beautiful song radiates love, warmth, and safety – everything that a good lullaby needs.

The narrator’s life began when they first saw their baby’s face, and they promise to love them forever as they wander through the world. If you like The Chicks, you should check out ‘Godspeed (Sweet Dreams)’ included on our playlist of songs about kids.

There Goes My Life – Kenny Chesney

Finding out you’re going to become a parent can be overwhelming, especially if it’s an unexpected pregnancy.

‘There Goes My Life’ follows a story of a young father who feels as if his life will be over once he becomes a parent. However, as years go by and his daughter grows, the phrase ‘’there goes my life’’ takes on a completely different meaning – and a much positive one.

We include this song on our songs about real life playlist.

Having a baby comes with a huge responsibility. You think of their future and how much of it is in your hands. In this wonderful country song, the narrator sings to her newborn baby.

She explains all the ups and downs that her child is going to face in its life. She says she might not have all the answers, but she will have all of the love and support for her unborn baby.

If you are expecting a baby, then you must have heard ‘’are you hoping for a baby boy or a baby girl?’’ at least once.

Sometimes there’s a preference and sometimes there’s not, but one thing is for certain – you’ll love that baby no matter what. In ’All-American Girl’, Carrie Underwood sings about how fast your preference can change once your baby is born.

It Takes a Man – Chris Young

Becoming a parent brings a lot of responsibility, and not everyone is ready for that kind of a challenge. ‘It Takes a Man’ stays true to its title – a man finds out his girlfriend is pregnant, and he’s not sure if he’s ‘man enough’ to face such a huge change.

His partner, on the other hand, is ready to raise their baby by herself, and he has no words of reassurance to give her. Silence speaks louder than words sometimes.

We get it – being young and having fun with your partner seems like a good idea until it catches up with you and you find yourself doing a pregnancy test a month later. ‘Two Pink Lines’ is all about the anxiety such a situation can bring.

Two pink lines on a pregnancy test can sometimes come as a miracle, but it is often the case that it’s the complete opposite. This time, fate was on our narrator’s side – phew!

I Hope You Dance’ topped the country music charts in 2000 and won a Grammy for ‘Best Country Song’ – and for a good reason. This wonderful song is full of hope only a parent can feel for their children.

In the music video, Lee Ann Womack dances with her two daughters and sings about all the wonderful things she wishes for them in the future. She wants them to experience the beauty of life, never lose their courage and never settle for less than they deserve.

In ‘Isn’t She Lovely’’, Stevie Wonder praises his everyday miracle, his wonderful daughter Aisha. The song celebrates the birth of Wonder’s first daughter and expresses the joy he felt when he first met her.

It took him less than one minute to realize how lovely, wonderful, and precious his baby girl is. The track includes vocals from baby Aisha, which makes it even more personal and unique. Now that’s one lucky daughter.

Unexpected teen pregnancies are never easy. In ‘Papa Don’t Preach’, Madonna sings from the stance of a pregnant teenage girl who’s asking her father to support her decision to keep the baby.

Because of the line – ‘I’ve made up my mind, I’m keeping my baby’, this 1986 hit stirred up controversy. The song got a lot of praise from pro-life groups and plenty of criticism from abortion-rights groups, while Madonna took no stance on the issue.

Beginnings can be rough but it’s important to be strong and have faith that the future is brighter. The title track of Alex Clare’s album, ‘Three Hearts’, proves that hard work pays off.

In the song, the narrator talks about hard beginnings and slaving away to build a home for his future family. Once his child was born and there were three hearts beating under his roof, he realizes it was all worth it.

(You’re) Having My Baby – Paul Anka

Fatherhood is a wonderful thing, and it can change a man forever. In this song, Paul Anka celebrates all the joys that fatherhood brings. The track serves as a tribute to childbirth, yet opinions were divided when it first came out.

Even though it topped the Billboard Hot 100 for weeks, the song has also appeared on lists of the worst songs of all time. Women all over the world found the lyrics “I’m a woman in love and I love what’s goin’ through me” far from realistic.

Being a pregnant woman with a career brings a lot of challenges and misconceptions. In ‘To Zion’, Lauryn Hill shares what many women face – she was urged to abort the baby she wanted to keep in order to save her career.

In the end, she decides to keep her baby, and it was the best decision she could’ve made. She says she felt the love she’s never experienced before and describes her son as god-sent.

Bottle By My Bed – Sunny Sweeney

Experiencing a miscarriage is one of the hardest things a woman can go through. The brave Sweeney decided to share her tragic story with the world the way she knows best – through music and writing.

In this heartbreaking song, the singer shares her story of trying to get pregnant and losing her small miracle. She opens up her heart to the world and admits she would trade everything she has for a chance to have a baby and raise a family.

Stillbirth is one of the biggest fears of every parent expecting a baby. Those who experience this kind of loss, often grieve for a long time. In Ed Sheeran’s 2012 song, ‘Small Bump’, he sings about this terrible experience.

In the song, a grieving father addresses a child he’s lost and imagines what his baby would have looked like while talking about the love and comfort he would have provided. The song served as great comfort for the grieving parents all over the world, and our thoughts and prayers are with everyone who’s going through the same experience.

I Got You – Ciara

There’s no bigger love than that from mother to her child, and this song proves it. The singer promises her little baby boy that she’ll protect him and love him forever, no matter what.

This song is all about the unconditional love a mother feels for her child. The singer claims that no matter what happens, no matter what challenges her baby faces in the future, she’ll always have his back – and we believe her.

Yes, giving birth and having a baby is a wonderful thing, many would even call it a miracle – but it’s not all sunshine and rainbows.

Having a baby is the sweetest gift, but wanting a bit of relief from all those sleepless nights is perfectly fine. This rock song describes what it’s like to hold onto your sweet miracle while desperately wanting a bit of sleep and peace. Hmm, maybe it’s time to call the grandparents…

There is no bond sweeter than that between a father and a daughter. ‘My Little Girl’ serves as proof of this incomparable love.

Throughout life, every daughter will change and grow, but she’ll never change in her father’s eyes. Good luck to every future boyfriend of a girl with a father like this – he’ll be impossible to impress.

Sitting down with your children and realizing you’re going to forget these moments one day, makes you want to cherish them forever. Steven Curtis Chapman wrote ‘Cinderella’ after a regular night with his daughters, bathing them and putting them to bed.

Originally written as a song filled with love and hope for the future, the song became one track that brought the most pain to the artist. Just months after the song was written, one of Chapman’s daughters died tragically, and the song took on a completely different meaning for the singer and his family.

Also, see our list of songs about missing someone who died.

Not a lot of songs about pregnancy sing about the process of labor, but we found one for you. Being a new father means experiencing a lot of things for the first time and, for the bravest ones, that means watching their wife give birth.

Being a father is far from easy, and finding out you’re going to become one can be overwhelming. You want the best for your child, but can you really provide it?

In ‘With Arms Wide Open’, Scott Stapp opens up about his fears about being a father. He’s ready to show his baby all the beauty that the world has to offer, but he’s scared he won’t be able to save his kid from the problems he faced growing up. Escaping your past is never easy, but it’s not an impossible thing to do, and this song proves it.

One of the most famous songs about having a baby and being a parent – ‘A Mother’s Prayer’ earned Celine Dion a Golden Globe Award for the “Best Original Song”.

Dion dedicated this powerful song, not only to her son but to all the children in the world. As the title suggests, the song is a mother’s prayer and a plea for God to guide her child through life and keep her baby safe.

Out of many things that the pregnancy brought to the singer, one of the worst things was the awful feeling that she brought shame to her family’s name. In the end, she decided to keep her baby whom she now sees as a gift from God – and she used this song to explain it all.

Not all parents have it easy. Sometimes, pregnancy happens when you least expect it, and at the worst time, too.

In ‘Pregnant Again’, the singer puts herself in the shoes of a woman struggling to raise her three children, when she finds out she’s expecting a new baby. It seems scary and hectic at first, but in the end, she gives up and realizes there’s no point in freaking out, and starts hoping she’s carrying a baby boy. Well, that’s one way to deal with stress…