17 Best Songs about Heat and Heatwaves 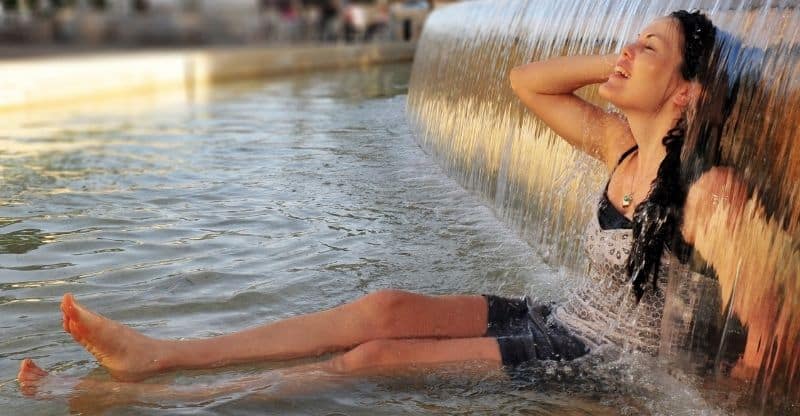 Are you a person who prefers cold or hot weather? If you’re the latter, you’re in the right place.

Of course, heat is not always used to describe the weather. It can be used metaphorically to represent love, passion, power, and more.

Here we’ve gathered some of the best songs about heat that will demonstrate just how often it’s used.

Love is Like a Heatwave – Martha and the Vandellas

Attraction towards someone can do wonders to our mind and body, and sometimes we can practically feel our temperature rising. Or at least our singer does.

In this light-hearted pop song, Martha Reeves sings about the way this fiery love affects her. The guy turns her on so much she can feel her temperature rising.

The Heat is On – Glenn Frey

Many remember ‘Beverly Hills Cop’ as one of the hottest movies of the 80s, and this song was a perfect addition to the soundtrack (which also brought us Harold Faltermeyer’s Axel F). In the theme of the movie, the song is all about being caught up in the action.

When the weather gets too hot, playing Bob Marley is never a bad choice. Nothing better than a slow reggae tune to make chilling in the shade better.

This positive reggae hit is brimming with optimism. It celebrates a sunny day and encourages you to go out and enjoy every moment. ‘Sun is Shining’ is a perfect addition to your summer songs playlist.

You know him as a movie star, but before his break as an actor, Will Smith was a second half of the famous hip hop duo DJ Jazzy Jeff & The Fresh Prince – and they made a perfect summer tune.

This Grammy-award jam is all about what gets down in Philly when the weather is hot. If you ever wanted to experience Summer in Philadelphia, this is a song that will tell you all about it.

Hot Fun in the Summertime – Sly and the Family Stone

The sweetest summer memories were made when we were still in school. Hot weather, long nights, and spending time with your friends outside – this song will bring it all back.

Perfect song to crank up and enjoy your hot days at the beach. The song encourages you to make some memories and live your best life this summer.

Summer in the City – The Lovin’ Spoonful

Although it was released back in 1966, ‘Summer In The City’ still remains one of the greatest songs about summer, and it’s a perfect addition to your playlists when heat levels are high.

The song sets the scene in a large city and contrasts living in it during the day and night. Spending one night in a city such as New York is like experiencing a completely different world.

Imagine a place where you can go and only find joy, happiness, and forget all about your worries. If you wish to visit a place like that, Kokomo would be perfect for you.

How can a playlist such as this one not include this classic beach song? The lyrics tell the story of two lovers who decide to visit the hot island of Kokomo, where they can work on their relationship and create memorable memories.

When you think of heat, does it always remind you of the weather? Or maybe of a particular person? Our singer met a girl who makes him feel like he’s on fire.

The song is pretty straightforward: it’s about a man who’s fantasizing about a woman who’s taken. Just thinking about her makes him ‘burn’ with desire.

If you like this, check out our playlist of songs about fire.

Is there anything more annoying than a person who just can’t seem to decide what they want? This type of behavior is often described as ‘hot and cold’, and Katy Perry has a song that shows what’s it like to deal with such a person.

The song describes a guy who’s very indecisive – he’s into her one day, and then doesn’t care another. It seems impossible to have a steady relationship with a person like this.

Heat of the Night – Bryan Adams

One that’s a bit different from the rest of the songs on our playlist, ‘Into the Fire’ was inspired by Orson Welles’ epic movie The Third Man.

The singer also found inspiration during his trip to Berlin, before the Wall came down. Inspired by the horror movie and divided Berlin, it comes as no surprise that the lyrics are a bit dark.

Love can feel like heat, and some people are running away from it because they’re scared they’ll get burned.

The song describes the pressure a person can feel when they have to decide if they want to have something more with their love interest. This kind of pressure can feel like heat that’s rising, yet the song encourages us to not be scared to follow our hearts and feel a bit of warmth.

The song describes a hot summer romance from two perspectives. The guy’s perspective shows the relationship as simply sexual, while the girl, Sandy, sings of many innocent parts of their short but sweet bond.

Burnin’ For You – Blue Oyster Cult

Do you ever feel like you’re just living in the heat of the moment, aimlessly going and burning through life? If so, you’re not alone, and we got a perfect song for you.

The narrator of the song is going through life without stopping to think about the meaning of it all. He’s lost control of his actions and feels as if he’s simply burning through days like a comet.

Loving Blue Oyster Cult? Then check out their classic ‘Don’t Fear the Reaper’ on our Halloween playlist.

In the Summertime – Mungo Jerry

A summertime classic. This cool song is perfect to listen to while chilling in a shade and sipping on a cocktail when the weather is too hot to do anything else.

A cheerful song that’s sure to lift up your spirits and make you excited for summer. This timeless tune is all about having a good time and enjoying the season and all that it brings – heat, good times, and happy memories.

Don’t let the good times stop here! Check out our playlist of songs about good times.

Before it was sung by Janis Joplin, the song was featured in the folk opera ‘Porgy and Bess’. The song was covered by many artists, but Joplin gave it a perfect blues and jazz twist.

The original song was inspired by a lullaby, and some describe the lyrics as ‘the best in the musical theater’. Well, you be the judge of that.

The high heat is not always a good thing and, with climate change, our favorite season can often be described as cruel summer.

This song reflects upon the main issue our world is facing today – climate change and its effects on all of us. Just listening to the lyrics of this song got us gasping for some fresh air.

Although a ‘heat wave’ is often used to describe hellishly hot weather, this time it’s not the case. In this song, the band uses the expression to tell a story of a man whose relationship is failing, and he blames himself for the situation he brought upon his partner and him.