25 Best Songs about Hollywood, aka Tinseltown 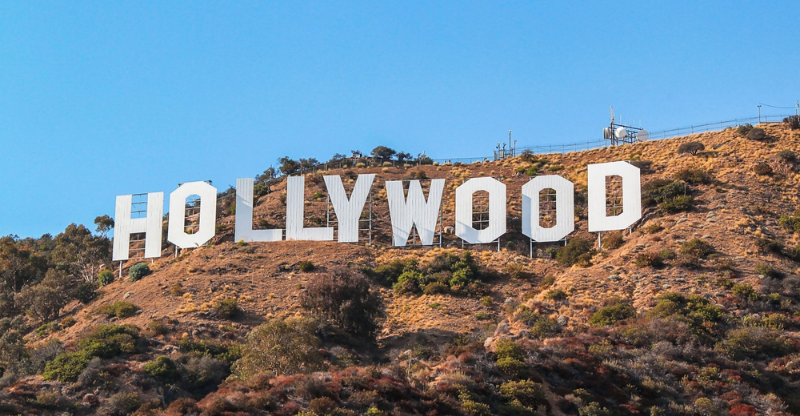 A notorious city boasting countless celebrities, and home to America’s entertainment industry, Hollywood has a long and infamous history. Many times, artists who make it have a love-hate relationship with the California hub, and don’t mince words about it in their songs. Other artists have documented its well known allure in their tracks. From love songs to breakup songs written about Tinseltown, check out this playlist featuring songs about Hollywood.

Frontwoman Courtney Love details her Hollywood experience with her band’s number-one hit ‘Celebrity Skin.’ Much like another one of their smash hits, ‘Make Me Over,’ the rocker attacks celebrity culture and unabashedly chronicles her personal experiences with it. Though she had flashes of fame in the early ’90s, it all came to a head when her husband, Nirvana founder Kurt Cobain committed suicide, and Love was often blamed.

Related: This appears on our list of classic rock songs by women.

The musical style Kool & The Gang nicknames ‘Hollywood Swinging’ is detailed in their first number-one hit on the R&B charts. The song is told from the perspective of a fan who sees the band perform for the first time and becomes inspired by their funky, dynamic sound. The popular track would go on to have staying power, often being licensed for use in hit shows like Martin and Lizzie McGuire.

Lost in Hollywood – System of a Down

Band member Daron Malakian has long called Hollywood home. Because of this bird’s eye view, he is someone who has experienced first hand the dark underbelly of the city. System of a Down takes a critical view of the entertainment industry mecca with ‘Lost in Hollywood,’ which details how young, starry-eyed aspiring actors can end up selling themselves in many ways for a taste of fame in Hollywood.

“I don’t want to take you dancing, when you’re dancing with the world.” Another critical take on Hollywood by a celebrity is found with pop singer Michael Buble’s single ‘Hollywood,’ originally titled ‘Hollywood is Dead.’ He takes a poetic approach with the lyrics, reminding young starlets to be careful as they make their way through the entertainment industry seeking fame and fortune.

While many celebrities who live in Hollywood write songs taking a dim view of the town, Bob Seger penned a gentler track about the glitzy city with ‘Hollywood Nights.’ Seger generally stayed outside of Hollywood’s city limit signs, choosing to record in Alabama at the famed Muscle Shoals studio. This outsider perspective fueled the single, which highlights an unassuming Midwesterner who falls in love while traveling through California. When she leaves him, he wonders if he can go back to his simpler way of life.

One of Fergie’s top hits encapsulates the Hollywood lifestyle in resounding fashion. Also a member of The Black Eyed Peas, the singer-songwriter scored several hits of her own when she went solo. ‘Glamorous’ is told from Fergie’s perspective as she documents both the glitzy lifestyle and the hardships she’s had to deal with to become an A-lister.

“She changed her name, to one that fits the movie screen.” A single released on The King of Pop’s posthumous album, Michael, he tells the story of a girl’s journey to Hollywood in hopes of becoming a famous actress. The singer-songwriter focuses on the ups and downs all creatives inevitably face when pursuing stardom, and offers hinted warnings in lyrics like, “It all looked so good, but only good from afar.”

When band members of Guns N’ Roses rented a place in L.A., they ultimately nicknamed it “Hell House” because of the constant illicit activity that went on in the area in which it was located. This experience, along with a catchy hook thought up by band guitarist Slash, served as inspiration for ‘Welcome to the Jungle,’ a rocking track about the seedy side of Los Angeles.

Related: More jungle capers? Swing on over to our list of songs about the jungle.

“Am I wrong for bein’ lost? The pressures of bein’ boss exhausted every bone in my body.” Though rapper Machine Gun Kelly has struggled with mental health issues for much of his life, these issues were compounded after he reached national fame with his album Bloom and his portrayal of Motley Crue drummer Tommy Lee Jones in the Netflix movie, Dirt. In his song ‘Hollywood Whore,’ he candidly raps about the toll Hollywood life has taken on both he and his personal relationships.

After moving back to the east coast, songwriter Billy Joel had time to reflect on his days spent in Hollywood. While doing so he wrote ‘Say Goodbye to Hollywood,’ a story that sees a California romance bloom and come to a bittersweet end. Joel was always a huge fan of ’60s music, and the sound producer Phil Spector created with his acts. He channeled the girl vocal groups of the Spector era for this song, singing it in a key that ultimately became just out of his reach.

Rapper Post Malone has called Utah home for some time now, but for several years he lived just outside of Hollywood. With his tune ‘Hollywood’s Bleeding,’ he uses vampire symbolism to represent the way Tinseltown can metaphorically draw blood and steal your life from you. Though the song depicts the town as being full of “ghosts,” its mysterious charm continues to draw unsuspecting people into its wrath.

“How could it hurt you when it looks so good?” Though Madonna reached international fame in Hollywood and became a status symbol of the California celebrity lifestyle, she eventually had to break away and move to England because the culture was getting to her. In her song ‘Hollywood,’ she talks about trying to get away but always being pulled back in by its irrestistible allure.

“And now the words sound familiar, as you slam the door. You’re not what we’re looking for.” Featuring lyrics that play out like scenes from a movie, Supertramp tells a rags-to-riches tale with ‘Gone Hollywood.’ The title references a popular phrase meant for people who fit the celebrity mold often found in the city. Though the song’s character begins his story while sitting in a Taco Bell, he eventually portrays himself riding in a limousine after finally catching a break despite facing countless rejections.

“The dark is taking my mind.” Electronic dance artists LA Vision and Gigi D’Agostino leave listeners in a trance with their collaborative effort, ‘Hollywood.’ The single explores the mythological role Hollywood has embraced over the years. The song’s instrumentation and lyrics weave together a tale about losing oneself to vices that are widely available in the L.A. area.

Rumors have long swirled as to what The Eagles’ ‘King of Hollywood’ is truly about. While its general theme revolves around the decadent and gluttonous lifestyle Hollywood big wigs often lead, fans speculate there are personal experiences that fueled the song. One rumor posits Don Henley wrote the tune while angry about a movie role he was supposed to get that fell through. Another states that Henley wrote it after his girlfriend had an uncomfortable experience with a movie exec.

Hollywood takes on the personification of a beautiful woman with this Gorillaz track featuring rapper Snoop Dogg. The quirky digitally-based group talks about Hollywood’s “seductive” ways, and her ability to put the song’s protagonist under her spell and “bow down.” Despite her jealousy, antics, and everything she puts people through, the main character tells listeners this about Hollywood: “She’s a wonderful thing.”

An array of emotions are explored in Lewis Capaldi’s track ‘Hollywood.’ Supposedly, while visiting the town (a long way away from his home country of Scotland), he met someone and fell in love. He explores this complicated, long-distance relationship with the lyrics, but he puts a twist on it. In the song, he’s the one in L.A. and the girl he misses is back in Scotland.

One of the ’90s most popular films told the story of a well-to-do business man who charms a Hollywood hooker and the two fall in love. In 2018 the film Pretty Woman was adapted into a musical, and musician Bryan Adams took on the role as one of the play’s composers. ‘Welcome to Hollywood’ is the introductory track for the musical, and paints a vivid picture for viewers, including “danger in the streets” and “hopes and dreams.”

Controversial and iconic rapper Eminem is no stranger to drama. He’s always been brutally honest with his music, often using lyrics to detail real-life issues like his messy relationship with longtime partner and sometimes-wife Kim. With his tune ‘Say Goodbye Hollywood,’ the songwriter takes a more vulnerable approach not often found in his music, and he discusses taking a break from the limelight and the craziness that comes with fame.

“‘Bout to throw this Chevy in Tom Cruise.” Quite a few references to the grungier side of Hollywood are made with Yelawolf’s ‘Trailer Park Hollywood.’ Appearing on his album Trunk Muzik 3, the rapper sings about L.A. streets and keeping it real despite so much fakeness around him. While others try to appear rich the rapper stays true to his roots and references trends of days gone by: “I still got the dice hanging from my rearview.”

R&B singer Miguel’s ‘Hollywood Dreams’ alludes to the dangers of L.A. while also paying homage to Hollywood greats like Bowie. The artist captures the essence of the mystical town, referencing “Palm trees and a numb sensation.” But the dangerous nature of Hollywood is explored when the rapper criticizes those who make fame their “religion.” Despite these criticisms, he still shows respect to those who shaped the modern Hollywood landscape, including David Bowie with lyrics like “We could fly higher than spaceships baby,” in reference to Bowie’s alter-ego Ziggy Stardust, a character living in space.

Though ‘Celluloid Heroes’ wasn’t one of The Kinks’ most popular tracks, it went on to become synonymous with the deaths of famous people due to its airplay alongside celebrity obituary announcements. The song deals with the band’s thoughts on the realities of fame, and the highs and lows of Hollywood culture. They gained inspiration for the tune during their stay at a hotel that overlooked the Hollywood Walk of Fame.

The nostalgic glamour of old Hollywood is explored with this leaked Lana Del Ray tune. She originally intended to include it on an album but never liked the way it was produced, so she shelved it. But in 2013, it was somehow accidentally released as a stand-alone recording. Del Ray’s stage name pays tribute to old Hollywood, a subject found in many of her songs. The “Lana” in her name is a reference to popular 1930s actress Lana Turner.

Written around a guitar riff the band had been holding onto for years, many fans speculate the Stone Temple Pilots’ track ‘Hollywood Bitch’ is about Courtney Love. Though she was never romantically linked to anyone in the band, they used her out-of-control behavior as the basis for a destructive Hollywood character in their songs.

Dahmer Does Hollywood – Amigo the Devil

“I am the agent that decides your fate.” When you first listen to Amigo the Devil’s dark tale ‘Dahmer Does Hollywood,’ it is obvious it’s a fictional story that revolves around Jeffrey Dahmer, one of America’s most prolific serial killers, and an alternate ending to his life if he would have never been caught. The song features Dahmer in L.A., still searching for victims but now a Hollywood talent agent. The straightforward yet creative lyrics draw comparisons between the predatory nature of killers and the predatory nature of the entertainment industry.