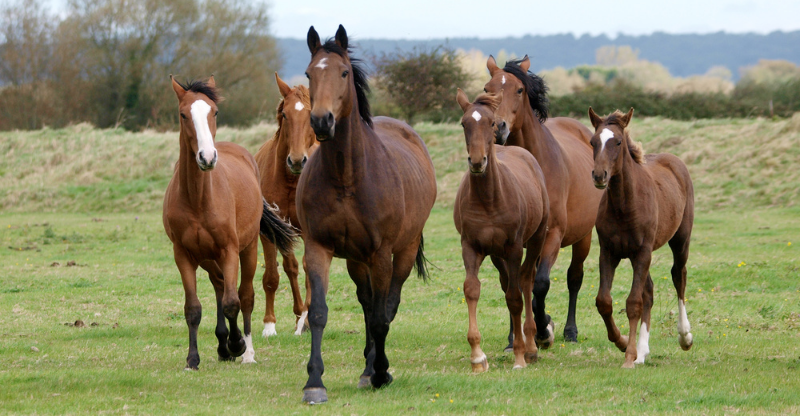 This eclectic playlist features multiple genres centered around a popular topic for songwriters, horses. From rock songs like ‘Who’s Gonna Ride Your Wild Horses’ to country classics like ‘Beer for My Horses,’ the valiant animal can take on different meanings both metaphorical and literal in music. For inspiration from a dynamic mix of artists, here are some of the best songs about horses ever made.

Tennessee Stud’ tells the story of a traveling cowboy and the adventures he has with his prized horse. This single was included on a posthumous album called Out Among The Stars. It was released in 2014 after Johnny Cash’s son found a stash of lost recordings he felt uniquely captured his father’s patriot spirit.

Related: Saddle up and see our playlist of songs about cowboys.

A Horse with No Name – America

A moody song that makes the listener feel like they are walking through the desert as they listen to it, America’s lead singer Dewey Bunnell wrote the song after visiting the south west with his father and being inspired by its vast, unforgiving landscape. The band was formed in England by sons of servicemembers stationed overseas.

Related: This one is super simple to play (just two chords). See our collection of easy guitar songs.

Country-pop crossover star Taylor Swift uses romantic imagery in her song ‘White Horse’ to tell the story of a young girl waiting to fall in love and be rescued by a prince on a white horse. She ultimately realizes in the end she needs to save herself. This single appeared on her award-winning 2008 album, Fearless.

Beer for My Horses – Toby Keith

Country legend Willie Nelson joins songwriter-performer Toby Keith for this story-filled song about how bad men were dealt with in the wild west. For the songwriting process, Toby Keith called up friend and fellow songwriter Scotty Emerick for his melodic abilities. ‘Beer for My Horses’ shot up to number one quickly on the charts after it was released.

Comparing a woman to a metaphorical horse, this song is about a girl breaking free from a controlling relationship. One of country band Rascal Flatts’ lesser-known tracks, ‘No Reins’ appears on their studio album Still Feels Good. Rascal Flatts is one of the longest running groups in country music. They got together in 1999 and have been making music ever since.

Related: See our playlist of songs about getting free.

One of country music’s most famous party songs, duo Big & Rich talk about their “old stud Leroy” as they ride through town catching the ladies’ attention in this amped up single. Big & Rich would go on to score other more serious hits like ‘Lost In This Moment.’ However ‘Save a Horse (Ride a Cowboy)’ continues to be their most popular single.

This early 1970s tune is about a cowboy’s relentless pursuit of a horse, the Chestnut Mare, a kind often found in America. Inspired by a mid-1800s Norewegian play, frontman Roger McGuinn worked with a Broadway director on a musical adaption of the play which included The Byrds’ music. Though the play was never completed, the band used several of their tunes meant for the adaption on their albums.

KT Tunstall was inspired to write this song while on a trip in Greece. While riding a moped, she came across a black horse who’d escaped from its fencing and was tearing through an olive grove. Feeling the experience took on a biblical role for her, she began writing the lyrics to ‘Black Horse and the Cherry Tree.’

Appearing on her 2018 album Golden Hour, ‘High Horse’ is an upbeat, funky tune about someone who’s full of themselves and arrogant. Though it tackles a darker subject lyrically, Kacey Musgraves was on a Bee Gees kick at the time of recording this album, so she gave the track a dance-able, disco vibe. She performed this song for her debut appearance on Saturday Night Live.

Back in the Saddle Again – Gene Autry

Gene Autry’s 1939 western-inspired release became his signature song. Autry reached stardom as a singing cowboy on the “silverscreen.” Fellow country singer Ray Whitley wrote the tune, then got together with Autry to tweak the lyrics to Autry’s taste. The singing cowboy then used it in his film Rovin’ Tumbleweeds.

Written for Keith Richards’ infant son in the late 60s, the song draws on Richard’s wealth of emotions he felt about leaving his young family to go on tour. Though Richards originally wrote the song, once bandmate Mick Jagger got ahold of it the only line he kept when rewriting it is, “wild horses couldn’t drag me away.”

Related: This also appears on our list of songs about undying love.

Inspired by a series of poems known as “Ten Bulls,” Leonard Cohen wrote ‘Ballad of a Runaway Horse’ while reflecting on personal enlightenment. Cohen’s lyrical stanzas mirror the different perspectives of the poems throughout the song. Country singer Emmylou Harris went on to record her own version of the tune for her 90s album, Cowgirl’s Prayer.

Coming to him in a dream, Michael Martin Murphey woke up his songwriting partner in the middle off the night to write this hit song. Murphey used the dream and inspiration from a childhood story his grandfather would tell him about a ghost horse native Americans communicated with to complete the lyrics. ‘Wildfire’ became a huge cross-genre success story for Murphey.

“Dark horse” is a term used to describe a mysterious figure whose talent and intentions are not yet known. Katy Perry co-wrote this single with fellow songwriter Sarah Hudson (who is related to actress Kate Hudson). Perry’s inspiration for this tune came from watching a popular 90s show based around modern day witches, The Craft.

Only the Horses – Scissor Sisters

Released on their 2012 album, Magic Hour, the nonsensical nature of the lyrics to ‘Only The Horses’ leave the song open for interpretation. The overall theme of the song features emotions of loss and yearning for something as the protagonist talks about trying to get found and brought back home.

Related: Head on over to our playlist of going home songs.

A Horse In The Country – Cowboy Junkies

Representing a metaphorical dream, ‘A Horse In The Country’ may mean different things to different listeners. To some, the horse in the song symbolizes freedom and independence. For others, it represents a new start. Some speculate the horse could even symbolize a lover the protagonist visits on occasion. Take a listen and see what images come to mind for you.

Though the lead singer of U2, Bono, sings this song it’s actually about the band’s guitarist who goes by stagename The Edge. When Bono penned this tune, The Edge was going through a tough divorce. Though it was a hard song to record, the group felt it was an important one to release.

Bring On the Dancing Horses – Echo & the Bunnymen

Bring On the Dancing Horses’ is a commentary on art’s role in society. The “dancing horses” represent statues and how people view themselves in the sculptures. Art has a way of opening the door to self-discovery for people, and lead singer Ian McCulloch dwelled on that thought while writing the song’s lyrics. This track appeared in the 80s hit movie Pretty In Pink starring Molly Ringwald.

Frontman Ian Astbury moved from England to Canada when he was just a young boy. While living in Canada, he became well acqainted with Native American culture and visited several reservations. The more he learned about their culture, the more he fell in love with their way of life. ‘American Horse’ was written from the Native American perspective. Astbury often wore feathers in his hair as a nod to his preferred way of life.

With lyrics left open to interpretation, fans of Baez music often relate the different stages of growing up to the horse theme of the song. Throughout the lyrics, the horses take on different colors, shapes, and attributes which can be contributed to how individuals respond to the different stages of life. Joan Baez’ work often took a spiritual path due to her work as a human rights activist.

Known for their clean image and pop releases, The Osmonds took a page out of rock ‘n roll for their song ‘Crazy Horses.’ Singing about the ill-effects of air pollution, the “crazy horses” in the song represent cars and their damaging exhaust. Though the song wasn’t a major hit in America, it was much more popular in the UK, rising to number two on the charts.

Rider in the Rain – Randy Newman

Chronicling a classic cowboy tale, singer Randy Newman talks about his “bride in Tennessee” and his mother in “St. Louis” as he makes his way toward Arizona. Riding his horse across the prairie in an attempt to find a better life, the singer references lines from old timey western-style tunes when he mentions the banjo on his knee.