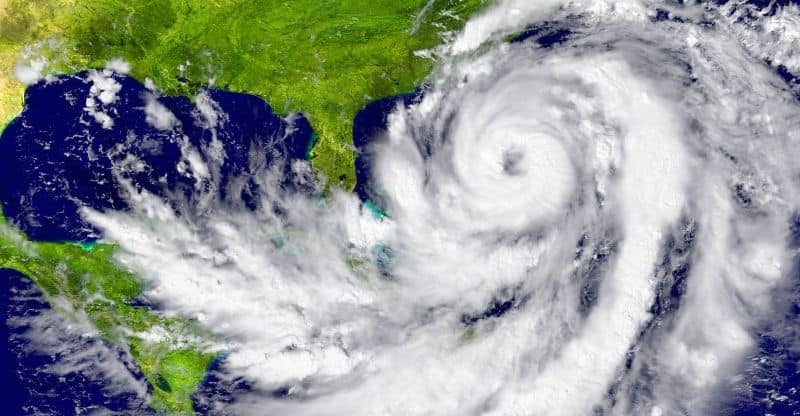 Hurricanes are one of the most destructive forces of nature that can be truly catastrophic.

Hurricanes form over tropical or subtropical waters and usually originate in the Atlantic basin (which includes the Caribbean Sea and the Gulf of Mexico). The World Meteorological Organization gives them names, such as Hurricane Irma, Matthew, Carter or Sandy, and Katrina.

So, here’s a collection of songs about hurricanes. Some are about meteorological events, but most use ‘hurricane’ as a metaphor for something else.

This song originally appeared on Buffett’s 1974 album A1A. This new version featured on Chesney’s Songs for the Saints album, for which all proceeds went to the Caribbean islands in the wake of Hurricane Irma.

Bob Dylan needs no introduction. This protest song was released in the mid-70s to bring to attention the injustices against boxer Ruben ‘Hurricane’ Carter.

For more on the subject, check out our list of injustice songs.

This trip-hop offering from Dido captures the passion and pain of companionship. In the song, she compares her desire to the tremendous power of hurricanes.

Here, Young compares his lover to a hurricane. There’s calm in her eye (just like the pinhole of a hurricane), but he gets blown away once the storm hits.

Hurricane – The Band of Heathens

Here’s a song is about an old man who lives in the famous French Quarter in New Orleans who is unfazed when told that a hurricane is approaching – he wrongly thinks the levees will hold. This sadly costs him his life.

The song is written by Leon Everett and covered here brilliantly by The Band of Heathens (with some incredible vocal harmonies on display).

You rarely find a song by Paul Simon that doesn’t stop and make you think, and this one is no exception. Here, Simon sings a foreboding tale – a hurricane of trouble on the horizon – about environmentalism and our civil rights, which, the lyrics suggest, are both being eroded.

Here we find singer Chris De Burgh on a Caribbean island at the Grand Hotel when suddenly the lights go, and there’s nowhere to find shelter from the ferocious storm approaching. You can’t help but feel this is a metaphor for his life.

In this classic CCR song, singer John Fogerty sings, “I hear hurricanes a-blowing.” We feature this on our playlist of songs about the moon.

Ok, I admit this isn’t a song about hurricanes but any excuse to include this classic Stones’ song, I’ll take it. Here, Jagger sings he “was born in a crossfire hurricane” (which one assumes means a turbulent family life.)

Indie gods R.E.M. caused a bit of a stir with this apocalypse song. But, of course, one assumes its tongue in cheek, or maybe they wouldn’t actually mind.

This song spawned a sub-genre of its very own, called ‘speed metal,’ which in turn gave us the likes of Motörhead and Metallica. This petrol head song is about a guy and his love for his wheels, which he reckons can out-race anything.

For more petrol head tunes, check out our playlist of car songs.

This rock-infused anthem by Scorpions is, what can I say, pretty obviously about you know what. The singer promises to make love like there’s a hurricane in the room – it sounds pretty chaotic!

Lin-Manuel Miranda experienced the catastrophic damage that Hurricane Maria unleashed on Puerto Rico in 2017. ‘Hurricane’ appears in the musical Hamilton (in act two).

Hurricane Drunk – Florence and the Machine

You’ve heard the term ‘blind drunk,’ but how about “hurricane drunk” – imagine the hangover the next day.

Riders on the Storm – The Doors

A song about a storm, but remember, a hurricane is a type of storm, which justifies the inclusion of this song. Also, who could ever deny a touch of Jim Morrison?

We also feature this track on our list of songs about stormy weather.

Of course, it had to include the king of good times, Jimmy Buffett (whose other cocktail-related song – ‘Margaritaville’ – we include on our songs about the beach.)