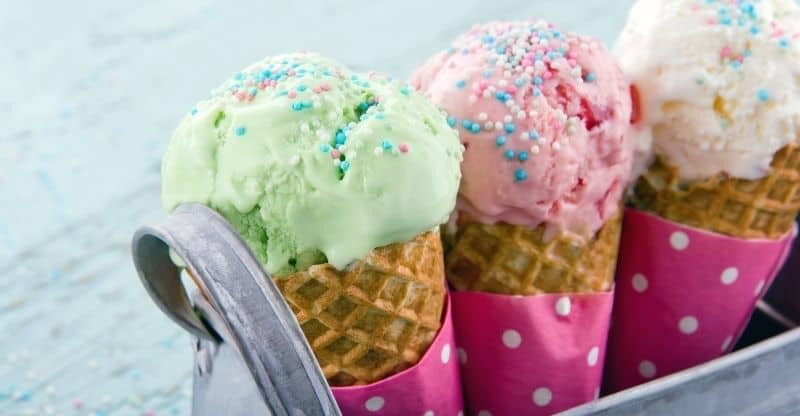 Sicilian chef Francesco Procopio dei Coltelli invented ice cream (or ‘gelato’) back in 1659. It started out life as a dessert for royalty (like most things) before it became everyone’s favorite bit of sugar sweetness.

We not only have ice cream to thank for the calories, but there’s also plenty of popular songs about ice creams.

Written by the Chicago blues musician John Brim at Chess Records in 1953. With a healthy dose of double entendres (typical of many American blues songs), this was one of two covers from Halen’s first album (the other was a cover of The Kinks’ ‘You Really Got Me’).

This was one of lead singer David Lee Roth’s favorites and he insisted on it appearing on the first album.

Scottish indie rock band Glasvegas released this on their debut album in 2008.

The lyrics are foreboding, warning of “a storm on the horizon”. We’re all blind to this peril, he says. We just keep waiting on the pavement “For the ice-cream van to come”.

Also, check out our list of storm songs for more meteorically inspired tunes.

Appearing on Cole’s first solo album (known as the ‘X’ album because of the cross on the album sleeve), ‘Ice Cream Girl’ was co-written by organist Blair Cowan.

Cole wrote this song while he lived in a studio apartment in lower Manhattan, turning his living space into a recording studio. Bet the neighbors were happy.

Appearing on our list of songs about food, ‘Ice Cream Man’ is a Waits song from his Closing Time album. I love the idea of Tom Waits in an ice cream truck.

Waits’ persona in the ’70s was the archtypical bar-room crooner, raspy, gravelly voice and all.

London dance-rock group New Young Pony Club (now known simply as changed their name to ‘NYPC’) released ‘Ice Cream’ in February 2005. The limited-edition pressing of a thousand copies sold out in three days, making it one of the most popular ice cream songs ever!

The little-known NYPC nailed this one, with its cool bass line and risque lyrics.

From their 2015 offering The Magic Whip (with its ice cream cone cover), this song is a little deceptive.

According to guitarist Coxon, it “sounds jolly enough on the outside, but there are some dark undertones there.”

“I was only twenty-one / When I watched it on TV” alludes to when Damon Albarn watched the Tiananmen Square massacre of 1989 on TV.

The bass solo is supposed to be a spin on the ‘Mr Softy’ tune that ice cream vans used to play.

‘Banana Split For My Baby’ by Louis Prima

In this brilliant ice cream song, Prima is intent on his girl stuffing her face with ice cream while he sticks with a glass of water (cos he “ain’t got no money”).

Gotta love the song lyrics on this track!

Prima provided the voice for the orangutan King Louie in the 1967 Disney film ‘The Jungle Book’.

The indie-rock group from Issaquah, Washington, this song by Modest Mouse has a darker side to it than the name suggests. The lyrics tell a story about troubled family life and a dispute with his father.

In 2006, former Smiths guitarist and writer joined the band after their guitarist Gallucci quit.

‘Ice Cream’ by The Wombats

From The Wombats’ fourth studio album, ‘Beautiful People Will Ruin Your Life’.

The song tells the story of someone you want so badly that you feel like ice cream melting in the sun.

“Melting like an ice cream in the sun / He’s low and she’s high, but I take it offline / Is there really such a thing as too much fun?”

The Wombats are an English indie rock band formed in Liverpool in 2003. Their plucky guitar and techno sound has won them lots of fans.

‘La Dolly Vita’ is a play on ‘La Dolce Vita’, meaning ‘the sweet life’ in Italian (and the title of a famous Federico Fellini movie in the ’60s).

The song is about having a good life with the girl of your dreams: “La dolly vita / Cool as ice cream”.

Smashing Pumpkins are an American alt rock band from Chicago. Their breakthrough came with the album Siamese Dream in 1993.

A love song that compares her love with ice cream: “Your love Is better than ice cream / Better than anything else that I’ve tried”.

However, she’s mindful that it could all go wrong: “It’s a long way / Down to the place where we started from”.

Since 1988 Sarah McLachlan’s atmospheric brand of folk-pop has gained a group of devoted fans in her native Canada.

From Beck’s superb 1972 album Jeff Beck Group (known as the ‘Orange Album’), the groovy ‘Ice Cream Cakes’ is one of the best songs about gelato with some amazing guitar work from the brilliant Jeff Beck.

“It’s so nice to be loved by somebody / Somebody like you”.

Jeff Beck is one of the three guitar legends to have played with the Yardbirds (the other two are Eric Clapton and Jimmy Page). Heard of those guys?!