14 Powerful Songs about Injustice That Will Inspire You 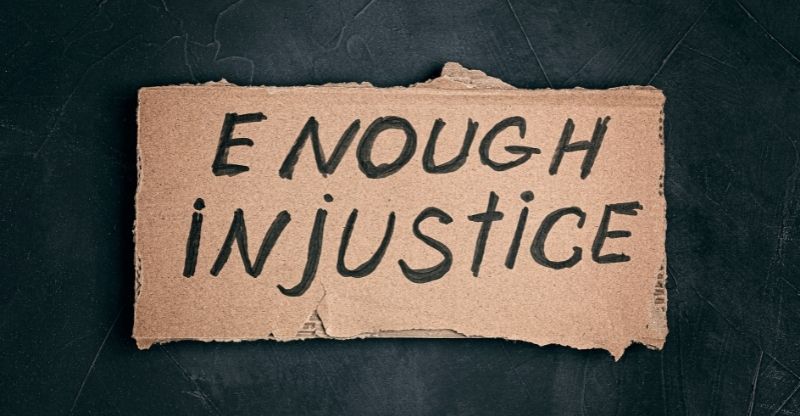 Despite huge advancements as a species, there is still a lot that’s wrong with society. Racial inequality, gender and sexual inequality, poverty, corruption, gun violence, war, the list goes on.

While music can’t fix all of society’s ills, it plays a special role in bringing people together around a common cause.

As you’re about to see, many of these songs have inspired (and continue to inspire) generations of people who want change, and many are sung on marches and peaceful protests.

So here are some of the best songs about injustice to inspire you.

From the groundbreaking album The Freewheelin’ Bob Dylan, Blowin’ in the Wind is one of the finest protest songs ever written. Written at the height of the Cold War, American folk singer Dylan poses several rhetorical questions about peace, war, and freedom.

In the words of critic Greil Marcus, it was a “song that the times seemed to call forth.” As a result, the song became a civil rights anthem and got Dylan the world’s attention.

Also, check out Bob Dylan’s song ‘Hurricane’ about the false imprisonment of boxer Ruben Carter. Finally, for a great anti-war song, try his ‘Masters of War’ (also covered by The Staple Singers.)

This superb Oscar-winning song was originally written for the movie Selma, which chronicled the life of Dr. Martin Luther King, Jr – in particular, the epic march from Selma to Montgomery, Alabama (in 1965) to secure equal voting rights for black people.

This gospel-infused song connects moments like Rosa Parks refusing to sit on the back of the bus and brings it forward to current times, with the protests in Ferguson, Michigan (for the shooting of Michael Brown at the hands of a white Police officer).

Now for another modern-day civil rights anthem. For many, this is the modern black national anthem and has become the anthem of the modern social justice movement.

In this song, Lamarr sings about the struggles of the modern black experience in the US, recognizing the hundreds of years of struggle that led to this point. But above all, it’s a song about hope and staying positive, a bit like ‘We Shall Overcome.’

It was chanted at a Black Lives Matter assembly in Cleveland and countless other times. “We gon’ be alright!” was even sung at a rally for Republican presidential candidate Donald Trump.

One of the most famous songs about world peace, John Lennon’s ‘Imagine,’ reminds us how our reliance on possessions (capitalism) and religion stand in the way of peace. It was written around the time of the Vietnam War, but its message is timeless.

Can you imagine a world without these things? “It’s easy if you try,” he tells us.

This famous song by Jazz singer extraordinaire Billie Holiday was written by Abel Meeropol, a white Jewish schoolteacher. It was the photograph of a horrific lynching in a civil-rights magazine that stirred up something inside of him, resulting in this hugely influential song.

Related: This appears on our list of best 1930s songs.

This Sam Cooke classic was inspired by Dylan’s ‘Blowin’ in the Wind’ and became an anthem for the American Civil Rights Movement and positive societal change.

Sadly, with events like the murder of George Floyd at the hands of a white police officer (among countless others), these changes are still overdue.

Stevie Wonder – Living For The City

Here’s one of the best songs about injustice ever written. In a powerful piece of social commentary, Stevie Wonder profiles the misfortunes of a young black man who starts his life out in “hard time Mississippi” who moves to New York City for a better life – he falls victim to Police brutality and ends up behind bars.

Here’s one of the most famous Bob Marley songs of freedom. He urges the listener not to give way to “mental slavery” and speak your truth. There’s no need to be afraid – even a nuclear war “can’t stop the time.”

This feisty black pride anthem doesn’t hold back with its scathing attack on racial inequality – even the likes of John Wayne and Elvis Presley are in the firing line. ‘Fight The Power’ was a saying soul brother #1 James Brown (a leading figure in the fight for racial equality) uttered back in the ’60s.

A Lot of Love – Chris Brown

This song by R&B artist Chris Brown was written as a response to the Black Lives Matter movement. In the song, he calls for unity in the wake of Philando Castile and Alton Sterling’s deaths.

He released the song for free for anybody dealing with injustice or struggle in their lives.

Where Is The Love? – Black Eyed Peas

This socially conscious hit from the Peas is one of the most popular modern songs about solidarity. Despite it being nearly 20 years old (it was written in the wake of 9/11), it’s as relevant today as it was back then. It’s a plea for humanity to love each other – we all need a reminder to do that.

As a champion for the LGBTQ community, Lady Gaga celebrates diversity and says no matter what your preference is, embrace it. We’re each individual snowflakes, and the most important thing is to be yourself.

I Don’t Want Nobody To Give Me Nothing – James Brown

Like Marvin Gaye and his other peers, James Brown started to write more socially conscious, political songs the longer his career went.

In this funky protest song (with the inimitable Fred Wesley on sax), the Godfather of Soul speaks for all black people when he asks for a level playing field. He doesn’t want anything. Just “open up the door, I’ll get it myself.”

Written in 1984 by The Specials songwriter and keyboardist Jerry Dammers, here’s a song that demands the release of Nelson Mandela (who had been imprisoned by the South African government since 1962).

It became the unofficial anthem for the international anti-apartheid movement and brought to light this infringement of civil and human rights.