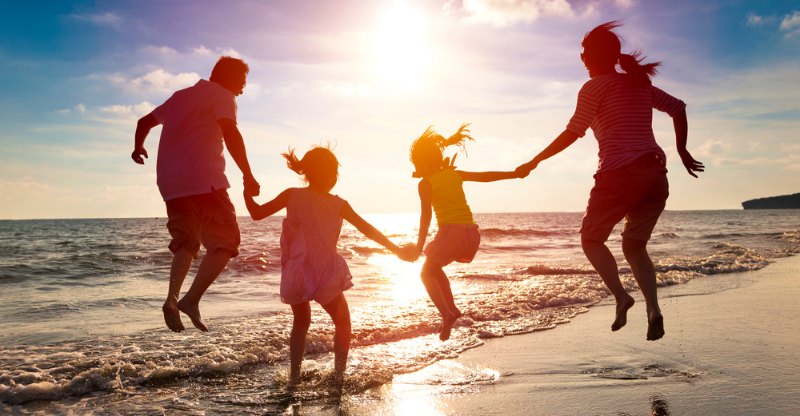 Who would have thought there were so many songs about jumping!

Of course, most of these songs are about partying and having fun (having fun usually involves some jumping around). Here we find gems from The Stones’ Jumpin’ Jack Flash to the classic Jump Around from House of Pain.

So, time to get your bounce on, and check out these fine cuts.

While this song encourages you to go for it, most members of Van Halen were reluctant to make this one! Eddie Van Halen wanted to use the synthesizer as a lead instrument, but the others thought using it instead of the guitar would mean they were sellouts looking to make more money. It was a good choice since they stayed at number 1 in the US for five weeks straight!

Related: Sing your heart out with these karaoke songs for men.

Jump in the Line – Harry Belafonte

This calypso song is a cover of a cover…of a cover! Woody Herman first performed this song in 1952. Lord Invader made a cover, followed by Lord Flea, whose version inspired Harry Belafonte. Belafonte’s version is much different than Herman’s and is about dancing with a beautiful woman named Senora.

Jumpin’ Jack Flash’ is about overcoming obstacles and making a better life for yourself. The song was somewhat inspired by Keith Richards’ gardener, who he called “jumping Jack.” Richards and Mick Jagger played around with the phrase until they came up with a tune and “jumpin’ Jack Flash.” The song made it to the Top 10 in the US and UK.

Related: This song features on our playlist of songs about a hurricane.

Jump Around – House of Pain

This is a classic dance song that will make you get on your feet and jump around. Like many rap songs, the narrator talks about how he’s the best rapper around and can’t be touched. He also claims he’s the best physically and could win a fight if he gets into one. While the lyrics seem random, they relate to jumping, although in the violent sense of “getting jumped!” The song charted in the Top 10 in several countries.

Related: Head over to our playlist of fun dance party songs.

Jump (For My Love) – The Pointer Sisters

The Pointer Sisters released this song in 1983. It reached the Top 10 in the US and UK and stayed popular due to the Olympics held in Los Angeles, California, the following summer. There’s a lot of jumping in the Olympics, after all! The song is about two lovers who are eager to be together, and the narrator encourages her lover to go all-in for the relationship.

Related: Check out these other songs about falling in love.

The Kriss Kross duo were only 14 years old when they released ‘Jump.’ It made it to number 1 in the US and many other countries and number 2 in the UK. Kriss Kross was known for wearing their pants backward, which they called “totally krossed-out.”

Flo Rida raps about meeting a beautiful woman and dancing with her. He wanted the song to motivate anyone, whether they’re dancing at a club or training for a sports event. This energetic song is sure to get you moving! The song had varying levels of success, charting at number 54 in the US, 21 in the UK, and number 9 in Scotland.

Jump Into the Fire – Harry Nilsson

The narrator in this song appears to be pleading to his lover to be with him so they can make each other happy, making it seem like his love interest doesn’t want to commit. Some people interpret this song to be a little deeper than that, understanding this song to be a plea to society to improve life.

Louis Prima was at his prime in the 1930s and 40s but managed to make a comeback with this song in 1956. This swing song will have you jumping and jiving for sure, and maybe even wailing! The song mentions people doing things around the house, but everyone ends up dancing.

The Brian Setzer Orchestra covered Louis Prima’s ‘Jump, Jive and Wail’ in 1998. This refreshed classic charted at number 23 in the US and was used in a GAP commercial. Thanks to the cover, the band won a Grammy for the Best Pop Performance by a Duo or Group with Vocals.

Taylor Swift tries to convince a potential lover to take a chance with her. She admires all of their features and tells them she’ll always be there. This song was released on the Fearless Expanded Edition album and made it to the Top 30, along with the other four songs added to the album, making Swift the first artist to have five singles chart in the Top 30 in one week!

Related: Go to our playlist of popular Taylor Swift songs.

‘Jump Right In’ is a fun blend of Caribbean and country music that will have you dreaming of a tropical vacation. Zac Brown sings of a worry-free place where you can enjoy the music and the water and maybe fall in love. The song was released in 2012 and charted at number 53 in the US.

Related: Seize the day with these songs about living for today.

Blue October sings about how navigating the ups and downs life throws at us is a lot like jumping with a jump rope. The song is upbeat and a good one to sing along to, making it an excellent song to help you cheer up when you’re struggling to get through the tough days.

Jump in the River – Sinéad O’Connor

In this song, the singer talks about a lover she respects so much that she’d jump in a river if they told her to do it. Sometimes you find someone you feel like you can trust with your life, and that’s the kind of person this song is about. This song was first released on the 1988 Married to the Mob soundtrack but was also released as a single that year.

Related: Float away with the best river songs.

The meaning of these lyrics isn’t super clear, but they’re most likely a social commentary about labor changes in the UK made in the 1970s and 80s. The song mentions Mrs. Maggie, who’s speculated to be Margaret Thatcher, making this song to be political in nature.

Charting at number 12 in the UK, ‘Jump n’ Shout’ was released in 1999 by Basement Jaxx, a duo who made electronic music. The song was heavily inspired by dancehall music and featured MC Slarta John singing the lyrics.

The Big Jump – The Chemical Brothers

This song is meant for dancing or vibing since it’s just electronic music that repeats the song’s title several times. It was released in 2005 and has been favored by racing video games, featuring on the soundtracks of Project Gotham Racing 3 and Burnout Revenge.

Related: See our playlist of songs about driving.

Get Up and Jump – Red Hot Chili Peppers

This was the first single Red Hot Chili Peppers released. It’s a dance song meant to make you get up and move, so the lyrics are pretty nonsensical. However, “Frumpkin” was the last name of a girl guitarist Hillel Slovak liked, and this song was what finally made her decide to give Slovak a chance.

This song is about people who are bored in their relationships and just want to go out and have fun! The people in this song forget that they’re in relationships for the night and go to the club to dance. A man and woman meet each other and spend some time dancing and flirting, ignoring that they each have a lover waiting for them to get home.

Related: Tiptoe over to our playlist of songs about secret lovers.

Apache (Jump on It) – The Sugarhill Gang

The Sugarhill Gang released the fifth rap song to appear on the Hot 100, and it became one of the most popular rap songs. The song covers ‘Apache’ by Incredible Bongo Band, who covered the original song by The Shadows. The song is about the fictional characters the Lone Star Ranger and Tonto.

Sir Mix-a-Lot greets pretty much the entire US in his cover of The Sugarhill Gang’s ‘Apache (Jump On It).’ He mentions a few places in the chorus and then raps about them in detail in the following verse. He mentions cities in Texas, Florida, and Arizona, just to name a few.

Lil’ Kim wants to start the party and have a good time. She raps about wealth, partying, spending the night with different guys, and being the best rapper. The song debuted at number 95 in the US but made its way up to number 17.