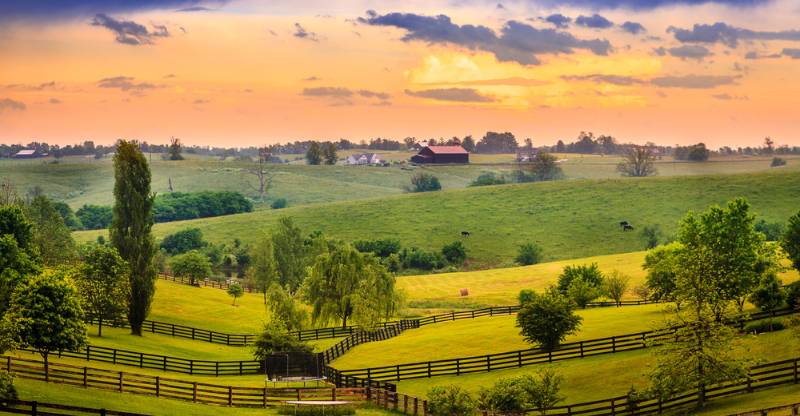 Kentucky is known for its horse racing, bourbon, coal mining, and, of course, the home of bluegrass music. Here are some of the best songs about Kentucky to help you understand this Southeastern state.

Bill Monroe wishes a past lover well in her life here. He still loves her, but she doesn’t have the same feelings for him. The song was listed as Number 11 on CMT’s 100 Greatest Songs in Country Music list.

Elvis Presley desperately searches for the woman who abruptly left him on a rainy day here. The song charted on the US Billboard Hot 100 and reached Number Three on the Adult Contemporary chart there. Eddie Rabbit, who co-wrote the song, released his own version a year after Presley died.

Neil Diamond wrote this track while touring with the Dick Clark Caravan. He talks about what it is like to meet and fall in love with a Kentucky woman in the lyrics. He wants on woman’s attention in particular to be content in life: “I don’t want much/The good Lord’s earth beneath my feet/A gentle touch from that one girl/And life is sweet and good.”

This song explores the darkness that comes with grief and hardship and was written after Dierks Bentley’s father died. Kacey Musgraves provides its emotional backing vocals. The song was not a huge commercial success, likely because of its dark and serious subject matter, which helped Bentley change the course of the album it appeared on.

Laura Bell sings of her pride as a Kentucky resident here. She encourages listeners to join her in celebrating the state and having fun on a Friday night. She mentions many highlights and landmarks of the state throughout the lyrics.

This track tackles the hardships that Loretta Lynn experienced while growing up as a coal miner’s daughter in Kentucky. Rather than feeling down about her past, Lynn sings of the challenges she faced with pride, as they shaped who she became. The song was adapted into a biopic starring Sissy Spacek; Spacek performed all of the film’s songs herself and won an Academy Award for Best Actress.

Brad Paisley talks of his family history that stems from eastern Kentucky in ‘You’ll Never Leave Harlan Alive.’ He talks about the coal mining history in the area and the rugged life his ancestors endured there: “And it’s there I read on a hillside gravestone/You will never leave Harlan alive.”

Run for the Roses – Dan Fogelberg

‘Run for the Roses’ is most famously known as the unofficial theme for the Kentucky Derby. Dan Fogelberg wrote it in two days and describes the chance involved in horse racing and life. It also talks about the rare opportunity to be a horse racer.

Like many songs about Kentucky, this piece highlights the life of coal miners over generations. It talks about the ways that mining influenced life and culture as well as the health effects that miners experienced from years of work. Well-meaning activists and their protestations against the working conditions of laborers are also included in the lyrics.

The narrator here wants to go “down to Dumas Walker.” Everyone will get food, including the narrator and his lover. He talks about the many things they will do together, including going to the drive-in and showing people whose town this is—presumably, the narrators.

‘Paradise’ appears on John Prine’s self-titled album from 1971. The song talks about his father growing up in Paradise, Kentucky, and the nostalgia Prine’s father feels for his hometown. It seems that Prine wants to go back as much as his father, but life has changed in the coal mining town now.

Mountain Parkway is a former toll motorway that opened in Kentucky in 1963 that was named after the state’s 50th Governor. The song talks about driving along this street and the sights that exist along the way. The parkway spans an impressive five counties at 75.627 miles.

This is the official song of the state of Kentucky. It was inspired by Harriet Beecher Stowe’s novel Uncle Tom’s Cabin and is about visiting relatives in a Kentucky hometown. It’s unclear if the song is autobiographical or merely based on Stowe’s work. John Prine covered the song, while Loretta Lynn’s similarly titled ‘My Old Kentucky Home’ also inspired the piece.

Black Stone Cherry seems to tell a ghost legend about Floyd Collins here, who was said to have died after getting caught while in a cave. The narrator says that Collins will be coming back on the day that the song is being sung, as he wants to seek revenge on those who are using his story for their own gain.

This song talks about Kentucky whiskey as well as the protagonist’s beloved woman. He has traveled all around but is happy to be back home and settled in Kentucky, his home state. The simple life with his love is all that he needs: “And we rise up every morning with the chicken / And every minute we’re alive we’re living.”

The narrator of this tune says that the women in Bowling Green are the prettiest and that any man in Kentucky is lucky to be around them. He also says that the people who live there are nice and allow people to mind their own business. The weather in the state is also desirable, according to the lyrics.

It’s Got to Be Kentucky for Me – Tom T. Hall

Tom T. Hall sings that he loves many states, but Kentucky is his favorite. He sings of it like a lover and says that he and the land there understand each other. His family is buried there too.

In this song, Dolly Parton tells the story of a gambler from Kentucky. He wanted more than a simple southern farmer’s life with a wife and kids, so he decided to take his chances with gambling. Parton says that he should rethink his life and go home so he can settle down with a family instead, as this is a safer choice for someone who is starting to lose everything he won.

Emmylou Harris has been left by a country boy in this song. She hopes he remembers her as his girl from Kentucky while he is living out his adventurous new life, as she still loves him. She wants him to know she loves him as he is and he doesn’t need to bring her fancy things to keep her heart.

The protagonist of ‘Kentucky Moon’ is happy about the beautiful starry night, which he feels represents his current happiness and contentment. He is proud of his home and the people in Kentucky that he loves. He says he can feel the state’s moon in his bones.