16 Songs about L.A. That Show the Good and the Bad 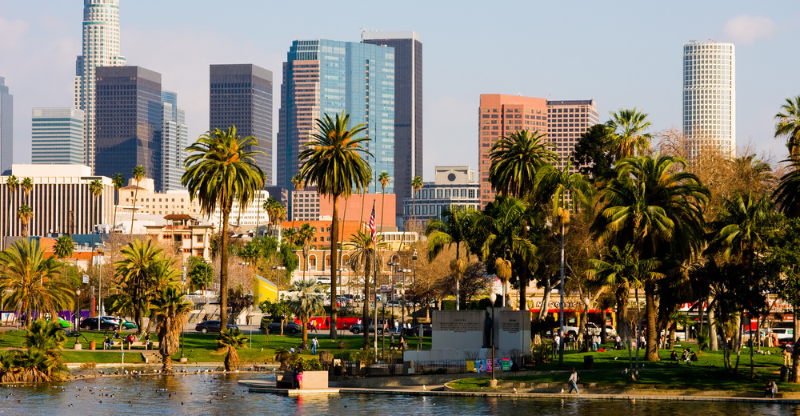 Los Angeles, California, is a city that inspires wonder and fascination in its admirers. But, the city also has its critics with a love/hate relationship!

Since many musicians have lived and worked in Hollywood, it is no surprise they have had quite a bit to say about the city of angels in their songs. So here are some of the best songs about L.A. to help you understand the various perspectives of singers and songwriters regarding the US city.

This song is about driving wildly down the L.A. freeway. The protagonist seems to get into Hollywood and then wonders what the life of a woman who has caught his eye is like. The song reflects more broadly on the lives of women in Los Angeles. Jim Morrison recorded his vocals for the track in the bathroom to create a better result. It became the title track for the final The Doors album released before Morrison’s death.

Related: Go to new places with the best location songs.

‘Los Angeles’ is a song about the city where the Haim sisters grew up. It’s a reflective piece and is the opening track to Haim’s third album, Women in Music Pt. III. The protagonist seems homesick for L.A., yet realizes there were disappointments there, too. Now, she feels lost and confused.

Related: Feeling out of place? Here’s our list of homesick songs.

Rivers Cuomo sings about his personal thoughts on this track. He states that he could technically live in Beverly Hills but realizes he wouldn’t fit in or be happy there. The song has a sarcastic edge that wasn’t originally intended, as Cuomo started writing it after genuinely wondering what it would be like to live in Beverly Hills. The song became Weezer’s first Top 10 hit in the United States.

Related: Check out the best songs with California in the title.

This R.E.M. track highlights the surface appeal of L.A. It may look appealing on the outside, but inside it’s mostly empty as a city. However, the song also presents this emptiness as a symbol of hope, as the city still has the potential to be anything. It was inspired by Michael Stipe’s time living in Santa Monica, a city in Los Angeles County near L.A.

Related: Get your hopes up with these songs about optimism.

Ellie Rowsell sings as a woman making bad choices during her pursuit of fame in Hollywood. She has become more cynical about her dreams by the song’s end and decides to call her mother to alleviate her loneliness and boredom: “‘Hey, is Mum there? It’s just me. I felt like calling.'” Even after self-reflection, she seems to think she will continue making mistakes to experience L.A. life to its fullest.

Related: Mistakes are part of life. Here are some songs about regretting hurting someone.

Here’s a piece that finds Peggy Lee singing about the joy, fun, and carefree living that L.A. offers; “the blues pass Los Angeles by.” Unlike many other songs about L.A., the song highlights the positive feelings and activities associated with the city that its residents and visitors can enjoy.

Related: Keep smiling with these songs about good days.

The L.A. Song – People Under the Stairs

This song is an ode to L.A., especially for those who grew up and survived in the city’s rougher areas. The song also focuses on Los Angeles’ more touristy areas, taking listeners on an audial tour of the city and its highlights.

Beck presents a humorous and sometimes nonsensical song here, with numerous wordplays highlighting the silliness and futility of much of Hollywood’s superficiality and fakeness. The somewhat complicated and often silly rhyming makes the song even more humorous for listeners.

Lana Del Rey sings of the joy that comes with a romance in Los Angeles with this track. The song relies heavily on its electric guitar rhythms and has an impressive runtime of 10 minutes, which is quite long for a modern pop track.

B.B. King sings of the good and bad of L.A. in this track. He seems to be singing as a protagonist escaping a dark past—literally and figuratively—by returning to Los Angeles. He also seems to be working hard to change his life in the city, even when it gets hard.

Related: If life is changing, here are some great transformation songs.

The protagonist here seems to be on his way to meet a woman who lives in Los Angeles. He has extreme daydreams about how it will be when they meet, all of which seem to paint him as a desperate and overly romantic individual. Johnny Mathis was the original singer of this piece; Art Garfunkel and Nancy Sinatra are two of several other notable artists who covered the track.

Related: Is your head up in the clouds? Enjoy these daydreaming songs.

Los Angeles, I’m Yours – The Decemberists

While the narrator of this track seems to love L.A. in a sense, he is also very bitter about its downsides. He complains about being stuck in a place that makes him feel miserable, yet he also realizes he belongs there. Vocalist Colin Melroy was so concerned about his vocals that he sucked on lozenges while recording, which he claims you can hear on the track.

Related: Listen to the best songs about feeling trapped.

It seems that the narrator here is in a bad mood due to a rough patch in life. Even so, he can appreciate the beauty and sunniness of his home in Los Angeles. It seems he struggles to get through nights due to his mental health, but daytime is easier for him to handle.

‘Scott Street’ refers to a street called Scott Avenue near a practice studio in Los Angeles. Phoebe Bridgers and her bandmate and former boyfriend Marshall Vore both spent time there. The song is said to be about a painful and harsh relationship that Vore was in before dating Bridgers.

This song imagines a fictional Los Angeles that is burning down. Rather than helping inform the public and taking other honorable actions, the media exploits those hurting for its own gain. It highlights that the media cannot always be trusted to have people’s best interests in mind or to tell the whole truth in every situation.

Related: Find this song on our playlist of burning songs.

In this apocalyptic song, Neil Young sings about L.A. in a less-than-positive light that mentions volcanoes and earthquakes striking the city. He refers to the relentless smog and calls the city “uptight.” Critics of the song think it’s too self-righteous and “Old Testament,” coming off as a prophet’s warning of destruction.

Related: Enjoy more apocalyptic tunes on our list of songs about the end.