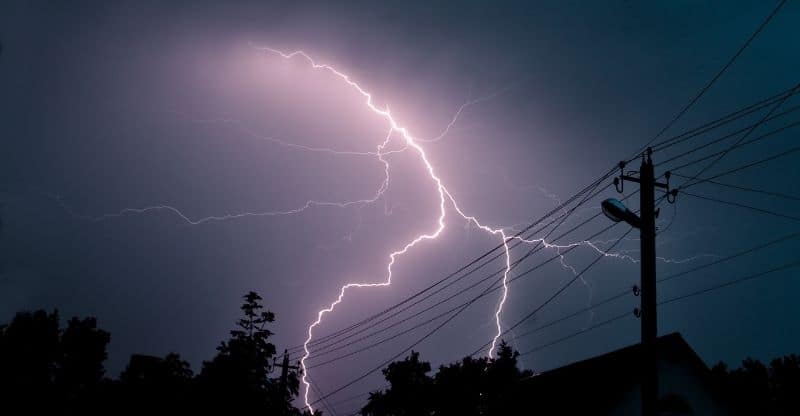 Lightning storms are one of the most beautiful and powerful ways of nature showing us who’s boss. Seeing a lightning strike is awe-inspiring, so no wonder they’ve proved to be a great source of inspiration in music.

Here we’ve gathered some of the best songs about lightning for your ears to behold. Enjoy!

Lightning and good old blues, what a combination. Add a bit of howling to the mix, and you got yourself a little mystery treat.

The song, written and performed by Howlin’ Wolf, was inspired by the singer’s memories of living in the countryside where he watched the passage of trains. Fiery sparks reminded him of lightning, while trains passing by got him thinking about a woman who keeps disappearing and coming back into his life.

‘Like a lightning bolt’ is an expression used to describe something sudden and unexpected, and it’s the exact image that extends through this song.

The singer uses the image of a lighting bot to describe the unexpected situation he finds himself in. Maybe love at first sight? Whatever the situation may be, the singer is all about living life, taking chances, and not thinking too much about it. That’s the spirit!

We get it – sometimes you just want to get up from your chair and run far away from your responsibilities. Okay, maybe you can’t do that, but listening to a song full of such imagery sure can help.

The song gives off an arrogant and angry vibe, and it’s bursting with energy and encouragement to break free. Being on the run might begin to sound like a good idea now.

We’ve all had questionable choices when it comes to love and partners. There’s something about players that some people just can’t resist, isn’t there?

In this famous Arctic Monkeys song, Turner gives a name to the twisted game the girl he’s attracted to is playing. She loves playing games with men, but love is blind and deaf, so our singer chooses to ignore it all. That is before he starts hating her guts, of course.

The Lightning Strike (What if This Storm Ends?) – Snow Patrol

A storm is often used as a metaphor for a turbulent relationship or a crazy period of life, and this song is based around that.

This beautiful tune that incorporates universal elements uses them as a way to emphasize the greatness of the girl that the singer is in love with. The image of a storm creates a feeling of a turbulent relationship. Will the end of the storm bring a rainbow or destruction?

For more on the subject, check out our playlist of storm related songs.

The Shock of the Lightning – Oasis

It’s hard to find an Oasis song that wasn’t an instant hit, and such is the case with ‘The Shock of the Lightning’. It deals with the complexity of love and how complicated relationships can get.

Emotions can be confusing and figuring out what is it that you’re feeling isn’t always easy. In this song, the singer tells a story of refusing to accept the fact that he’s falling in love.

The song shows a relationship in which two people struggle to communicate. Their feelings are present and strong, but they’re having a hard time getting closer to each other. The main reason behind this are the strong emotions they are feeling, which are represented through images of lightning and flames.

We’re all familiar with the feeling of butterflies in our stomach, but when the passion is too strong, it’s often that we feel sparks all around us and the person we’re attracted to.

The British-Irish boyband uses lightning as a metaphor for the excitement we feel when we kiss the person we like. This excitement is often referred to as ‘sparks’, which could be the inspiration behind this metaphor.

It seems that every song we include is about some kind of power or excitement, and this one is no different. This time, we’re dealing with a gang fight.

Explosion, flashing, strikes – all of these create an image of power and lightning, which is why the singer used it to describe a gang street fight. If you want something to pump you up, this is a song for you.

When we think of a thunderstorm, our minds immediately think of power and destruction. In ‘Saw Lightning’, Beck uses this imagery as a way of describing the experience of destruction around him.

The song describes a dark point in one’s life. He might have mistaken lightning for a light at the end of a tunnel, but it was something far greater and higher.

The song is written like a game of words and it includes a lot of sexual innuendoes. Travolta sings about cars and girls in a way that you can’t really tell which is which. This timeless tune is still a major hit, and one of the most popular songs from the movie.

The song starts slow and quiet, as it builds up and burst into an energetic and powerful tune. Reminds you of something? Yep, it’s like an approaching thunderstorm. A smart way to stay true to the title.

This might seem like a song about nothing more than a lightning storm. Is that ever the case? The lyrics can be interpreted as a crisis that’s coming. Since the lightning never strikes the same place twice, there’s hope the crisis won’t be like the last one we’ve experienced.