20 Essential Songs about London that Celebrate this Bustling City 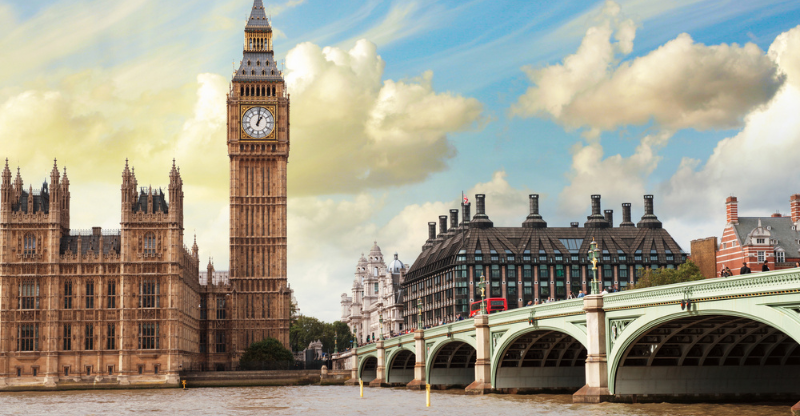 London has long been a haven for some of the world’s most popular music. From the blues revival of the ’60s to the notorious punk movement of the ’70s and ’80s, the bustling city houses some of the music industry’s most storied cultures.

From The Clash’s popular ‘London Calling’ to The Pogues’ memorable ‘A Rainy Night in Soho,’ here is a wide-ranging playlist of songs about London.

Penned as a tribute to Waterloo Bridge in London, which frontman Ray Davies had to cross each day to attend school, the song is a story about fictional lovers Terry and Julie who meet under the bridge to run off together and start over in another country. Though the story is fictional, the themes of starting over and falling in love were deeply personal to Davies, so he felt like listeners were looking into his diary when he released ‘Waterloo Sunset’ with The Kinks.

Related: This song features on our list of sunset songs.

“London calling to the faraway towns.” This is one of the most classic London songs you probably recognize. The Clash’s most recognizable song features a London-centric dystopian theme. The lyrics detail all the “apocalyptic” ways London and the rest of the world could end. The haunting, simplistic production of ‘London Calling’ makes it a punk rock classic and acts as a tribute to the city, fostering so much musical talent in the ’60s and ’70s.

Related: Find this song on our playlist of songs about the apocalypse.

Down in the Tube Station at Midnight – The Jam

Despite radio stations banning the tune due to the violent nature of the lyrics, ‘Down in the Tube Station at Midnight’ still became a top hit in the UK. Though much of the mainstream music industry misunderstood its message (and the entire punk movement, for that matter), the song’s story is actually from the perspective of a person who is the victim of a racially-motivated mugging. Frontman Paul Weller wrote it after experiencing severe burnout with the band’s schedule.

Ralph McTell waited six years to release ‘Streets of London’ after writing it in 1968 because he feared the song’s story was too depressing. But after it debuted on his Spiral Staircase album in 1969, the tune reached number two on the charts. McTell wrote the poetic song after time spent busking in France and meeting all kinds of people while performing on the streets.

Related: Travel to some songs about locations.

Up the Junction – Squeeze

Lacking a traditional song structure, the eclectic style of ‘Up the Junction’ tells the story of a man who gets a girl pregnant, and she ultimately leaves him due to his drinking habits. ‘Up the Junction’ is a British slang term essentially meaning “you’re screwed.” The music video for the single was filmed at one of John Lennon’s former houses in the late ’70s.

“So, do you think you’ve made the right decision this time?” This question lingers in the lyrics to ‘London’ as the setting of a famous train station is described. Themes of failed relationships and familial loss are explored and leave listeners with a sense of yearning. The moody song appears on The Smiths’ 1987 album The World Won’t Listen. Other bands such as Anthrax have gone on to cover the tune.

Related: See our playlist of songs about jealousy.

A Rainy Night in Soho – The Pogues

Pogues lyricist and frontman Shane MacGowan wrote ‘A Rainy Night in Soho,’ and it became one of their most popular tunes. So popular the band has performed it at every show they’ve done since they got back together in 2001. This particular recording from ’86 marks the end of the band’s relationship with Elvis Costello, who was producing their music at the time. A disagreement in instrumentation for the recording caused the split.

Related: Enjoy similar songs on our playlist of rain music.

“Call the police. There’s a mad man around. Running down underground to a dive bar in a West end town.” A nod to London’s well-to-do “West End” versus the more working-class East End, ‘West End Girls’ details London’s notorious nightclub life in the 1980s. The band spent a lot of time around London’s club scene, and the production’s party atmosphere came to life.

Related: Here are the best songs with “girl” in the title.

“Winding your way down on Baker Street. Light in your head and dead on your feet.” Drawing on his own experiences while living on Baker Street in London, artist Gerry Rafferty tells the gentle story of a man who wishes to better his life but can’t seem to get out of his own way. Because of this, he drinks so he doesn’t have to face reality.

Though this Halloween-themed danceable tune was released in 1978, Warren Zevon wrote it in the late ’60s while working with the popular group, The Everly Brothers. During the recording of Zevon’s album Excitable Boy, producer Jackson Browne also provided guest vocals on the track. The legend of the Werewolf involves the process of a man turning into a terrorizing wolf when the moon is full.

The feel-good production of Lily Allen’s tune about London is set against lyrics tackling the more seedy side of city life. Romance poet William Wordsworth and his poem Composed upon Westminster Bridge, September 3, 1802, acted as inspiration for Allen while studying his work in school. When she wrote ‘LDN,’ she was aiming to express her feelings about London honestly like Wordsworth would have expressed his own.

“Over bridge of sighs. To rest my eyes in shades of green. Under dreaming spires. To Itchycoo Park, that’s where I’ve been.” Originally written by bandmates as a bit of a joke, ‘Itchycoo Park’ is a nickname for Little Ilford Park in the city of London. Bandmates Steve Marriott and Ronnie Lane used to skip school and visit the park to listen to music. Its nickname comes from the Stinging Nettle plant found there that can cause rashes if touched.

A coming of age story featuring a protagonist who is disaffected with modern society, the lyrics focus on the dangers of instant gratification. The title ‘Mornington Crescent’ is a direct reference to an underground station that is always out of order and in need of repairs. The tune can be found on Belle and Sebastian’s album The Life Pursuit.

“Into its great shadowed vault I go.” ‘Brompton Oratory’ centers around one of London’s local, small Catholic churches. The religious theme in the song draws on Jesus’ return to his disciples. Though the lesson is sometimes people come back, it seems the protagonist isn’t so lucky in the song. Full of literary references, the lyrics also mention Victor Hugo’s Hunchback of Notre Dame story.

Take Me Back to London – Ed Sheeran

This 2019 collaboration features London rapper Stormzy appearing on Ed Sheeran’s track celebrating the city. The lyrics find the artists returning home after being away for some time and celebrating the fact that they are coming back to London. Sheeran and Stormzy have collaborated numerous times, including producing a remix of Sheeran’s hit ‘Shape of You.’

London Belongs to Me – Saint Etienne

“Just close your eyes and breathe out slowly. Tonight the world loves you only.” Romantic lyrics exude joy and discovery in Saint Etienne’s ‘Take Me Back to London.’ Familiar places such as Camden Town and Park Way are directly referenced as the protagonist’s falling in love is detailed. The tune appears on the 1991 album Foxbase Alpha.

This Reggae-pop hit was an international success, gaining huge popularity in the US and the UK. Though many listeners didn’t pay too much attention to the lyrics due to the fun beat, the song is actually about race and inequality. ‘Electric Avenue’ is an actual street in London named after it because it was the first street featuring lights powered by electricity. In the early ’80s, violent riots occurred between protestors and police in the area, which the single directly references.

Related: Light up the night with these songs about electricity.

The Battle of Epping Forest – Genesis

“No, you ain’t seen nothing like it. Not since the Civil War.” This progressive rock tune reads like an epic and can be interpreted in several different ways. Sometimes comedic, other times dramatic, the tale revolves around a “war” between opposing gangs. Though it centers around a battle in London, the song contains a universal theme questioning the necessity of war and bringing to light the devasting casualties of it. Frontman Peter Gabriel drew inspiration for the song from a news story.

Songwriter Marc Bolan wrote all of glam rock band T. Rex’s music, including the chart-climber ‘London Boys.’ The song was never released on a traditional album because it was supposed to be used in a series of rock operas being developed in the mid-’70s by Bolan. Though the track was released as a single and did well, Bolan ultimately abandoned the rock opera project, and the song was never used for its original purpose.

Highlighting the grungy life of a group of squatters in a low-end London district, this ’90s single was first released on the album Something Changed and was subsequently included in the film Trainspotting. Bandmembers Jarvis Cocker and Steve Mackey drew inspiration from their own less-than-stellar living situations for the song.

Related: You can hear this song on the Trainspotting soundtrack.