20 Best Songs About Loneliness and Being Alone 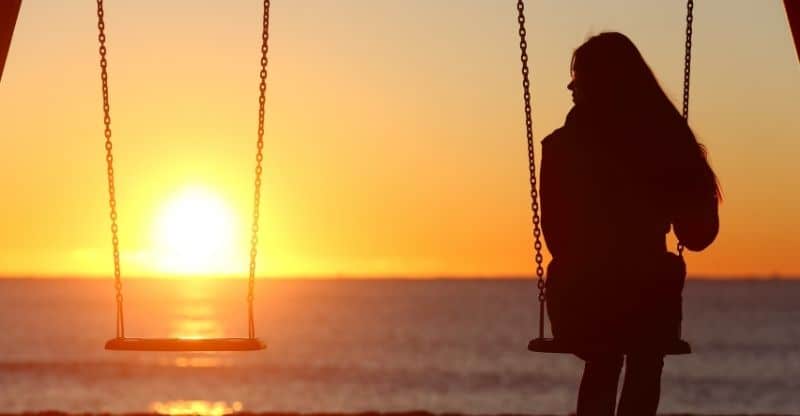 We’ve all felt lonely at some point in our lives. It’s part of being human.

Songwriters know the feeling, too, as there are tons of great songs about loneliness, as you’re about to find out.

Listening to these songs won’t necessarily blow away your blues, but hopefully some of these loneliness songs will remind you you’re not alone (they’re not all sad songs, by the way).

So, here for your listening pleasure are the best songs about loneliness.

‘Only The Lonely (Know the Way I Feel)’ By Roy Orbison

Released in 1960 and Orbison’s first major hit, ‘Only The Lonely,’ was written by the legend himself and his songwriting partner, Joe Melson.

‘Only The Lonely’ was the first time the world heard his soulful vocal delivery, and from that moment on, we were hooked!

Orbison had intially tried to sell the song to Elvis Presley (who turned it down). The story goes that when Elvis saw the song come out, he bought a bought a load of copies of the song and gave them to friends.

Appearing on Dylan’s 1974 Blood on the Tracks album, ‘You’re Gonna Make Me Lonesome When You Go’ is a great little song about how he’s going to feel when his lover leaves.

Dylan has separated from his wife at the time, so it’s believed some of the lyrics are about his failed marriage. The affair he mentions is thought to be about his then-girlfriend, Ellen Bernstein.

Dylan insisted it was all made up (inspired by literature, namely Chekhov). “Critics thought it was autobiographical – that was fine,” Dylan said in a Rolling Stone interview.

‘So Lonely’ by The Police

Definitely, one of the most upbeat songs about loneliness ever written!

The verses are a reggae enthused vibe straight out of Kingston, Jamaica. In fact, Sting admits the chords were directly lifted from Bob Marley’s ‘No Woman No Cry.’

The chorus is pure ‘four beats to the floor’ rock ‘n’ roll.

The lyrics are about feeling lonely after getting heartbroken. Feeling dejected, he can only “sit and nurse my broken heart.”

This song has a famous ‘mondegreen’ in it (a mondegreen is a word that sounds like something else). The song title was often misheard as ‘Sue Lawley’, the late BBC broadcaster!

Perhaps the ultimate lonely song, Space Oddity is about an astronaut (‘major Tom’) who cuts off communication with Earth and floats into space.

The words were inspired by Kubrick’s masterpiece 2001: A Space Odyssey that Bowie had seen several times. “I was very stoned when I went to see it,” he admitted in a 2003 interview with Performing Songwriter magazine.

Note: we also include this on our songs about space playlist that is well worth checking out.

Despite being about a guy getting stranded in space, the BBC used the song as background music during the TV footage for the 1969 moon landings!

‘Lonely Boy’ by The Black Keys

With its groovy vintage organ riff and chunky bass, ‘Lonely Boy’ harks back to old rock ‘n’ roll records. It totally kicks butt and it’s one of the best feel good songs out there.

The guy in the video is a certain Derrick T. Tuggle, an actor/part-time security guard they’d brought in to shoot the video. He’d been brought in as an extra, but when Tuggle starting spontaenously dancing that way between takes, they loved i. So much so, they recorded the whole song. Genius!

Of course, one of the times we feel most lonely is after a breakup. There’s suddenly a huge, gaping hole for all those ‘lonely emotions’ to get a hold of you.

In this song, he admits he didn’t see the break-up coming: “I thought that I knew all that there was to” and admits he’s still in love.

‘Eleanor Rigby’ by The Beatles

The words depict a post-war Britain, with Rigby ‘waiting at the window’ for, one assumes, her husband or son to come home.

“These lonely old ladies were something I knew about growing up,” McCartney said in an Observer Music Monthly interview in 2008.

The “no one was saved” line was seen as a dig at Christianity, and the song came out weeks before Lennon’s controversial “we’re more popular than Jesus now” line.

The origin of the name ‘Eleanor Rigby’ is really bizarre. Until the 80s, the name was thought to be a taken from two sources. The ‘Eleanor’ bit from Eleanor Bron, an actress who appeared in the 1965 Beatles film ‘Help!’, and the ‘Rigby’ from a shop in Bristol Paul had seen, called ‘Rigby & Evans Ltd’. Then in the 1980s the grave of ‘Eleanor Rigby’ was found in a cemetery just yards from the spot where Lennon and McCartney first met in 1957! “It was either complete coincidence or in my subconscious,” McCartney said. Told you it was weird!

‘Pictures of You’ by The Cure

Old pictures of family members and friends can be really powerful. But there’s a downside too. If it’s someone you miss, looking at them can really shake you up.

In this thoughtful song from ’80s indie-pop maestros The Cure, the narrator is looking over pictures, wondering what could have been. If only he’d “thought of the right words, I could have held on to your heart.”

The idea for the song came suppodely came to singer Robert Smith after a fire broke out at his house. The next day, he found some old photos in the charred remains, and the song rose from the ashes (so to speak).

‘I’m So Lonesome I Could Cry’ by Hank Williams

This classic country song from 1949 is widely considered one of the best American songs ever written. It’s certainly one of the most recognized songs about being lonely.

Bob Dylan took inspiration from the song. In his autobiography Chronicles, he says, “I’d never heard a robin weep, but could imagine it, and it made me sad.”

Rolling Stone ranked it number 111 on their 500 Greatest Songs of All Time, the oldest song on the list.

‘Tired Of Being Alone’ by Al Green

If you feel lonely, try this one on for size.

Soul great Al Green’s first breakthrough hit, ‘Tired Of Being Alone’ came to Green in his sleep – like many songs, in fact.

If you’re prone to sleepwalking (like me, though I haven’t written a song yet), check out our best songs about sleep playlist.

The writer of this popular song, Doc Pomus, was no stranger to loneliness. He suffered from polio which severely limited his mobility. As a result, he found himself alone for long periods of time, feeling blue.

Nevertheless, he managed to write one of the best songs about being alone! It’s a perfect song about the blues.

Ray Charles has a hit with this song in 1956, but there are also covers by The Animals, Jimi Hendrix, Joe Cocker, Van Morrison, and even Los Lobos!

When Pomus met John Lennon years later, Lennon confessed that ‘Lonely Avenue’ was one of the first songs The Beatles rehearsed when they started out. That’s some accolade.

‘The Loner’ by Neil Young

Neil Young didn’t quite know how to manage his music career in the late ’60s. Flip-flopping from band to band, it’s well documented how hard it was to pin the guy down.

He burned a lot of bridges along the way, which he admits in his song ‘One of These Days’ from his ’90s album Harvest Moon.

Here, you can hear Young in action in Greenwich Village, just him and guitar. His idiosyncratic guitar playing style is on fine display here.

It’s not clear whether the loner in the song is him, or, as some people speculated, Steven Stills. Young has never confessed either way.

‘Are You Lonesome Tonight?’ by Elvis Presley

One of the best ‘lonely songs’ ever written, here.

‘Are You Lonesome Tonight’ was a huge hit for Elvis, staying six weeks in the #1 spot in the early sixties. The song is, in fact, much older, written in 1926 by the Tin Pan Alley songwriters Roy Turk and Lou Handman.

Here, the narrator asks his ex-lover if she’s heartbroken or ‘lonesome,’ like him. Then, he accuses her of lying to him when she said she loved him, but he’d “rather go on hearing your lies.” What a great line

The infamous Colonel Parker, Elvis’ manager, asked him to record this because his wife loved the song, Marie.

A song about loneliness, good and proper.

The narrator walks alone down a boulevard of broken dreams, where his shadow is the only company he has.

For more on the subject, check out our playlist of walking songs.

The song title is taken from Gottfried Helnwein’s artwork “Boulevard Of Broken Dreams”, the famous painting that depicts Marilyn Monroe, Humphrey Bogart, James Dean, and Elvis Presley all hanging out in a bar.

‘How to Fight Loneliness’ by Wilco

Here, singer Jeff Tweedy gives some advice on how to fight loneliness. His advice is a little ironic (or bitter), you could say.

“You laugh at every joke” and just smile all the time. I’m sure there’s more to it than that, but maybe I’m wrong.

Did you know Copy

‘Cactus’ by The Pixies

There’s got to be lots of lonely people in prison. This song, by indie rock supremos The Pixies, is about a man missing his wife while he’s doing time.

It was the closest thing they ever got to a love song, and despite its theme, is one of the upbeat tunes on their excellent album Surfer Rosa.

Bowie covered this song on his 2002 album, ‘Heathens’.

‘I Wish You Lonely’ by Morrissey

Morrissey’s album Low in High School is a scathing attack on world leaders.

“The people and politicians everywhere are openly in a state of mutual contempt. Translate all of this into great music, and life becomes hopeful.”

Several retailers refused to stock the album ‘Low in High School’ due to its cover art. The child with an axe is the son of Morrissey’s bassist, Mando Lopez.

Appearing on Weezer’s ninth studio album, Everything Will Be Alright in the End, ‘Lonely Girl’ is a mid-tempo love song that sounds like something straight from their Green Album era.

In the liner notes for the album, songs are grouped songs by one of three themes. This one is grouped under the category “Belladonna” (songs about Cuomo’s relationships with women).

Loneliness is the feeling that you’re on your own, with nobody to turn to for human connection.

This song reassures you you’re not alone and offers a lot of hope: “this is for all the lonely people, thinking that life has passed them by.”

It was, in fact, written as an optimistic response to the song ‘Eleanor Rigby’ (see above).

The Beatles producer George Martin worked on this.

‘Solitary Man’ was the golden-voiced Neil Diamond’s first single and was inspired by The Beatles’ ‘Michelle.’ It proved to be a big turning point in his career.

Johnny Cash also won a grammy for his version of the song.

The song, rather bizarrely, has got a certain air of R.E.M to it (check out their song ‘Driver 8’ and spot the similarities). But, equally, it could be just the fact it’s in a minor key!

More songs about being lonely, if these weren’t enough!