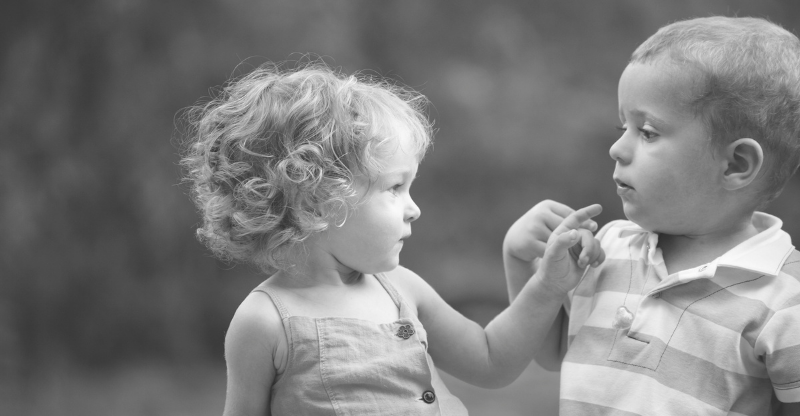 Is it possible to fall in love with someone the moment you meet them? The movies – and as you’re about to see, songwriters – seem to think so!

Some songs define ‘love at first sight’ as knowing someone is your forever person just by looking at them, while others think it’s just sweaty palms, nervousness, and an intense feeling – a bit like the moment before you get on a roller coaster :-).

Whatever it is, here are some of the best songs about love at first sight ever written.

Can’t Take My Eyes Off You – Frankie Valli

You’ve probably heard this love song somewhere, even if it was just the music and not the lyrics. This song charted at number 2 in the US and seemed to become a classic instantly! After seeing The One for the first time, the singer is speechless and thinks they’re “just too good to be true!”

Taylor Swift and Ed Sheeran perfectly capture that head-over-heels feeling in this song. The man and woman in the song met each other only eighteen hours ago, and each of them has been lost in a daydream about each other ever since. They barely said two words to each other and only know their first names, but they’re convinced it’ll end up in a love story. Ah, to be young and in love!

Related: this features on our list of Taylor Swift songs.

Sometimes seeing someone for the first time is like a fresh start in your life. Everything that happened before you saw them doesn’t matter anymore. Bright Eyes describes this feeling as the ‘First Day Of My Life.’ The singer wants to pursue a relationship with the person they just fell in love with. It will probably work out well since the other person shares the same feelings!

Related: this appears on our songs about living life playlist.

First Time I Ever Saw Your Face – Roberta Flack

Roberta Flack sings of a love that’s as powerful as the earth. Her lover’s eyes were like a sunrise, a kiss felt like the earth was moving, and the love felt like it would stretch beyond time. Many Americans must’ve felt that way about someone when this song came out because it stayed at number 1 for six weeks and was covered by Johnny Cash and Elvis.

George Harrison wrote and sang this song. Many people assumed his then-wife Pattie was the inspiration for the song, which he sort of agreed to at first, but later suggested that there were other things that inspired the song. Regardless of the inspiration, it’s a beautiful song about being enchanted by someone and never wanting to leave them, no matter what happens.

I Knew I Loved You – Savage Garden

“I think I dreamed you into life” just might be the sweetest way to tell someone they’re perfect for you! The singer sings about someone they met and knew they were the exact person they’d been waiting to fall in love with. They finally met the person who makes them feel complete.

This song tells the story of two people who met in a bar one night, and the singer imagines what it would be like to live their lives together. He even says he wants to stay with his lover when they’re ghosts. James Arthur didn’t think this song would be a hit, but it was number 1 in the UK and 11 in the US.

This Is The One – The Stone Roses

The first line in this song states that the song is about “a girl consumed by fire.” The song also says that “we all know her desire” because of some plans she made, but the song isn’t specific about those plans, leaving the “fire” open to interpretation. One interpretation is love. The song is sung in the third person about the girl until the second verse, so you can assume the singer is the one she fell in love with. Who said indie music doesn’t do love songs!

You Had Me from Hello – Kenny Chesney

In the 1996 film Jerry Maguire, Tom Cruise’s character says, “You had me at ‘hello,'” at the end of the movie. Kenny Chesney liked that line so much that he decided to write a song about it. The singer tells how his lover’s voice caught his attention, and their smile and eyes were what sold him. It’s the perfect story of love at first sight.

The singer in this song confesses his feelings to someone he fell in love with the first time he saw them. You can just imagine these two at a fancy restaurant or by a river as he tells them, “You’re in my heart, and it’s tearing me apart.” You can assume that he’s felt this way for a long time, and confessing his feelings is a pretty big deal.

Lionel Richie sings this song from the perspective of a man who met a woman and instantly fell for her. They dated for a bit since he mentioned being with her and kissing her, but she eventually left for someone else. Now the man is heartbroken and is begging her to stay with him. Lionel wrote this song with his then-wife Brenda, and it made it to the Top 10 in the US and Top 20 in the UK.

I’m a Believer – the Monkees

Imagine seeing someone so beautiful that they make you believe in love again! The singer says that “disappointment haunted all of my dreams,” but seeing a woman’s face made all of his fears go away. This song was written by Neil Diamond in 1966 and recorded by The Monkees in 1967. A new generation found appreciation for this song when Smash Mouth covered it for the film Shrek.

‘Love Story’ is a take on Shakespeare’s Romeo and Juliet. The woman’s family disapproves of her dating the man, so they must meet in secrecy. “Juliet” knew that it would be a lasting love despite everyone not approving. Rather than ending in a tragedy, Taylor Swift decided to choose a happy ending with a wedding proposal. This song made it to the Top 10 in 2008 and has stayed popular, especially with the 2021 recording.

This song debuted in 2002 and made it to number 2 in the UK and number 23 in the US, and was pretty popular around the globe. It’s a peppy song about instantly falling madly in love with someone the first second you see them. The singer not only seems enamored by this person but by the music they were playing, too.

Love at First Sight – The Brobecks

The man singing this song has fallen for a girl he walked by. It doesn’t seem like she has the same feelings since he asks, “Should I walk by again?” The question seems like he’s eager to have a relationship with her, especially since he contemplates kissing her later in the song. Lead singer Dallon Weekes wrote this song about meeting his wife, so you could say she eventually fell for him, too!

In this song, a woman working at a diner sees a man and falls in love. He doesn’t know her name, but after several weeks of serving him on Wednesdays, she picks up his business card and gives him a call. At the beginning of the song, she imagines their first kiss happening on a Thursday, and at the end, their first date is scheduled for a Thursday.

In this song, the singer tries to get the attention of the man she seems to have fallen in love with at first sight. She says, “I never knew that I could fall in love on the very first night,” so she questions if it really is love or not. She eventually gets the courage to ask him to call her sometime. This song came out in 2003 and reached the Top 20 in several countries.

This hopeful song is about a woman who fell in love with a man and will “keep on scheming” until she can rightfully call him her lover. You can tell the feelings are strong, and she has confidence that someday they’ll be together. This song was written and sung by Doris Troy when she was just in her 20s, and this song became a hit that reached the Top 10 in the US and has been covered by other artists multiple times.

‘Call Me Maybe’ was one of the most popular songs in 2011 that earned a place in the Top 10 charts worldwide. It’s an upbeat song about a girl who is bold enough to give her number to a guy she just fell in love with. She points out that all the other guys are after her, presumably to pique his interest enough to get a call!

Somebody To You – The Vamps ft. Demi Lovato

This song is about a guy and girl who fell in love with each other. They each reveal that they’ve constantly thought about each other ever since they met each other. Money doesn’t matter as long as they matter to each other. This song made its way to number 4 in the UK and the Top 20 in several other countries.