12 Songs about Maps to Help You Find Your Way 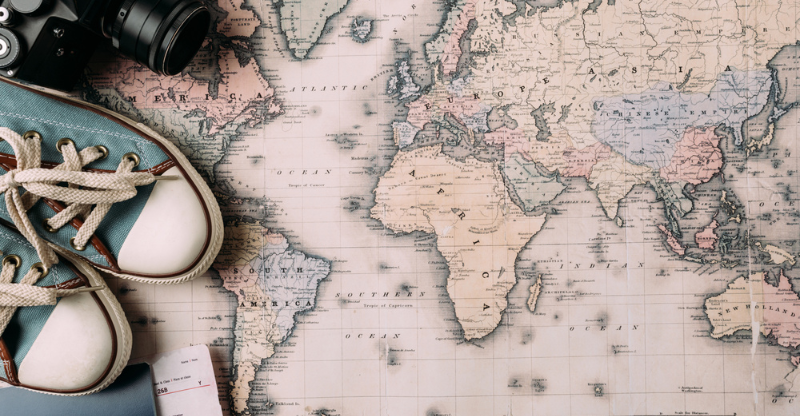 Whatever map led you to click on this article, we’re glad you’re here!

The songs on this list cover a range of genres and emotions, but each centers around a metaphor having to do with maps.

Whether you’re feeling lost and seeking direction or reflecting on the map of your life and relationships, these songs about maps will travel right into your heart.

Draw Me a Map – Dierks Bentley

Dierks Bentley’s deep country drawl immediately brings you into the lovely narrative of this song. After a hurdle in his relationship, Bentley is desperate to find his way back to his ex. He regrets everything that went wrong and is looking for the map that shows him how to correct his mistakes.

Related: Figure out how to apologize with these songs about messing up.

This song follows a lost man. Overlapping vocals and guitars create a disorienting feel that perfectly matches the wandering vibe of the lyrics. The line “maybe these maps and legends have been misunderstood” offers one explanation for how the subject of the song got lost in the first place. Maybe he was handed the wrong map and has been following a path that just isn’t meant for him.

Map of the World – Monsters of Folk

Do you ever feel overwhelmed by all the things in life you haven’t done? There are so many places to travel and things to experience that it’s impossible to do it all. This realization can evoke feelings that are hard to explain, but ‘Map of the World’ does it beautifully. They call it “some far-off feeling, some up close kind of ache.”

‘Maps’ is an earworm of a song with a driving kick drum and infectious melodies. It’s a catchy pop song, but the lyrical content has some great stuff, too! The narrator reflects on how he was always there for his partner, but they are nowhere to be found now that he is struggling. Despite this, he just can’t move on, telling this person, “I’m following the map that leads to you.”

Related: Hang onto this playlist of songs about letting go.

Map of Your Head – Muse

The narrator of ‘Map of Your Head’ is growing exasperated with other people. He feels like every interaction is surface-level or just plain fake. He tells these people, “I don’t need another map of your head.” He doesn’t care about them, but pretending to makes him lose himself.

Related: Dig a little deeper with these songs about fake people.

Map to Your Heart – Copperlily

The sweet guitar strumming lays the background for this lovely duet. This track tells the story of a woman who gave a man the map to her heart, hoping that he would pursue her but doubting that he actually would. He reassures her of his commitment with lines like “your heart’s the only one I want to know.”

An existential crisis in song form, ‘Map of the World’ is about realizing just how huge the universe is and how small you are in comparison. The electronic and otherwordly instrumentation captures the sounds of the universe, and the quick tempo matches the overwhelming feeling of searching for purpose. The song cries out, “when I imagine the whole universe, where do I fit in?”

Related: Travel the universe with these songs that take you to another world.

Being left behind by a lover is an awful feeling that makes you wish you could just grab them and ask them to wait. In this map song, lead singer Karen O sings to her partner, “wait, they don’t love you like I love you,” trying to convince him that no one else can love him as purely as she does.

Related: This song features on our playlist of the best boyfriend songs.

Map of You – Unlike Pluto

This transportive synth track feels like another plane of existence. The narrator finds himself in a complicated relationship, where the other person isn’t clear about who they are or what they want. They seem to be lost inside their own mind. Despite this, he is determined to find them, singing, “all thе roads lead to you.”

Related: Which path should you take? Maybe these songs about the road will help!

Throw Out the Map – Incubus

Maps are helpful, but sometimes sticking too much to your metaphorical life map is limiting. This intense song is about breaking out of the confines of the roads laid out for you and instead chasing the unknown. Even if you don’t know exactly what you want, Incubus encourages you to forget your plans and “throw out the map! Don’t look back!”

Anybody Have a Map? – Jennifer Laura Thompson and Rachel Bay Jones

This track is the opening number in the musical Dear Evan Hansen, sung by two moms to their respective sons. They sing about the struggle of raising children, asking, “Does anybody have a map? Anybody maybe happen to know how the hell to do this?” It’s a relatable track about pretending to have everything together when in reality, you’re just winging it!