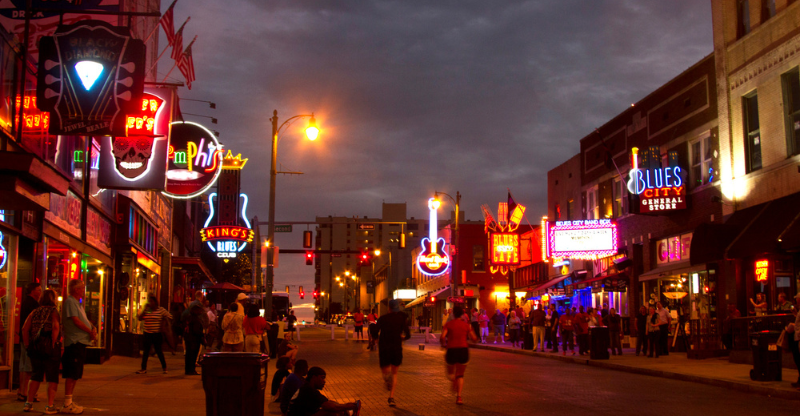 Memphis, Tennessee, is one of America’s most treasured musical hubs. While Nashville lays claim to country music, Memphis is wide-ranging, with a deep history of fostering multiple blues music movements, big band artists, and early rock and rollers. This playlist features songs about the southern city, and is full of music by legendary artists like Johnny Cash, The Replacements, and Chuck Berry. Check out these songs about Memphis below.

The biggest hit for Marc Cohn and his signature song, ‘Walking in Memphis’ is deeply personal to the singer-songwriter. Written as a form of prayer for blues music, he wrote it after making his way through Memphis and stopping off at the Hollywood Cafe where he met a singing piano player named Muriel. Cohn was forever changed by their conversation, which involved Muriel helping him work through deep-seeded childhood trauma. His hit song covers his “spiritual awakening” from that fateful day.

Back to Memphis – Chuck Berry

A riveting tune with a twist ending, though Johnny Rivers made the song ‘Back to Memphis’ popular, songwriter and guitar legend Chuck Berry originally wrote it. Berry drew on his friends’ real life events for the track, telling the story of a guy trying to make his way to Tennessee to see a mysterious young girl named “Marie.”

Heavily influenced by his recent trip to South Africa while writing this eclectic number, Paul Simon originally just used ‘Graceland’ as a placeholder title because he couldn’t think of anything better. But as the unique track began to take shape, featuring instruments and musicians of African descent, he realized the sound was similar to Elvis Presley’s early work at the famous Sun Records. In Presley’s honor, he kept the title.

Penned by songwriters Dave Gibson and Kathy Louvin, this ’90s country hit went all the way to number 2 after its release. Though not quite as popular as their playful hit single ‘Trashy Women,’ this tune tells another love story (more romantic than humorous, opposite of ‘Trashy Women’) about a young Georgia man traveling the south who meets a Memphis woman and has a passionate rendezvous with the ‘Queen of Memphis.’

A tale of two cities is at play with Bob Dylan’s ‘Stuck Inside of Mobile with the Memphis Blues Again.’ Mobile, Alabama is known for its more country musical background while Memphis is a famous hub for the blues. The song finds Dylan yearning for the Tennessee music town, while images and symbolism pertaining to Christianity pop up as well due to his recently finding religion while penning the tune.

In the ’50s and 60s, Memphis, Tennessee’s Stax Records was a popular recording spot for many big band artists. In King Curtis’ ‘Memphis Soul Stew,’ the saxophonist describes the label’s unique sound by relating it to the ingredients of a recipe. Some measurements and recipe staples include a “pinch of organ” and “fatback drums.”

Country crooner Chris Stapleton embraces the outlaw lifestyle with his wild tune ‘Midnight Train to Memphis,’ originally written while he was in his former bluegrass band The Steeldrivers. The song finds Stapleton in the slammer after carrying on and partying for several days. Reminiscent of Johnny Cash’s ‘Folsom Prison Blues,’ his cell is by a train track and he’s forced to listen to it roaring by every night.

Lead singer and hip-shaker Mick Jagger sings about a “gin-soaked, bar room queen in Memphis’ with his band’s country-fied hit ‘Honky Tonk Women.’ The jukebox classic is an ideal bar room song, which follows Jagger and The Rolling Stones on their escapades with women from Tennessee all the way to New York City.

Maybe It Was Memphis – Pam Tillis

The ’90s represented a golden era of music for women in the country genre, and singer Pam Tillis continued her reign from the ’80s well into the 1990s. For her hit ‘Maybe It Was Memphis,’ originally written by Michael Anderson, she delicately recalls a romance from days gone by. Recalling how her and her former flame fell in love, she confesses, “Maybe it was Memphis. Maybe it was southern summer nights.”

That’s How I Got to Memphis – Tom T. Hall

Every ache of the protagonist’s heart can be felt with Tom T. Hall’s ‘That’s How I got to Memphis’ thanks to his expertly delivered, soul-tinged vocal performance. The song centers around unrequited love, with the main character making his way to Memphis to try and convince his former lover to come back to him.

Released as a new single on their greatest hits album, A-ha penned a popular track with ‘Move to Memphis.’ The nostalgic song features a complicated love story, and made it all the way to number 2 on Norwegian charts, where the band is from. While the protagonist in the single can’t seem to get the nerve to move to Memphis and escape his small, quiet town, he has to grapple with losing his lover as well when she leaves without him.

A classic country simile is used to describe a long-lasting love with Uncle Kracker’s ‘Memphis Soul Song.’ Citing a devil on his right side and an angel on his left side, the love of his woman always brings him back from his dark and stormy tendencies. Their love is so strong and she’s such a pivotal force in his life he says, “She moves me like a Memphis soul song.”

One of Memphis, Tennessee’s famous hotels, The Commodore, a historic landmark in the town’s musical heyday, is front and center with Little Feat’s ‘Dixie Chicken.’ The tune spins a hilarious story, with several strangers at a bar trading love-gone-wrong stories, realizing they’ve all been duped by the same woman.

At first glance, Fogerty’s lyrics seem to be about a roaring train that would often make its way through the small town where he lived. The fast-moving locomotive seemed to have a big affect on young Fogerty. But fans have a different theory. Some of them believe the song is symbolic of the influence Elvis Presley’s music had on John’s own style as a musician.

An enduring song for alternative band The Pixies, they ultimately released an instrumental version of ‘Letter to Memphis,’ along with its original vocal rendition. The letter at the heart of the song is a love letter, but there’s a twist. In liner notes, fans tracked down an explanation for the song, which involves a past flame who lived in Memphis, Egypt, not Tennessee.

“I found her trail in Memphis..” Country outlaw Johnny Cash finds love with ‘Big River,’ a song her wrote after reading an article that said his voice sounded like he had the “big river blues.” The tune features a tormented Johnny, who fell in love with a fast-moving woman in Minnesota. When she skips town he tries to find her, making his way through the south looking for her from Memphis to the Mississippi River.

“How long must I wait for you?” One of rockabilly musician Rufus Thomas’ most popular hits is ‘Walking The Dog,’ breaking into the mainstream sphere after The Rolling Stones put their own spin on the track in the ’70s. With his blues-inspired ‘The Memphis Train,’ the main character is at the station, watching trains roll by, wondering if his girl will ever come back to him.

Rock band The Replacements penned a tribute track to their producer with ‘Alex Chilton.’ The Memphis-born producer was also a talented musician himself, playing in several bands and even pioneering the “Power Pop” sound. Credited as its originator, the subgenre is a form of pop/rock music and features artists like The Beach Boys and The Byrds. Worried Chilton might forever toil in musical abyss, The Replacements released the track as a way to draw attention to his legacy.

One of America’s most beloved jazz musicians, Hoagy Carmichael’s ‘Memphis in June’ is one of his lesser-known tracks. Though he’s most often known for his epic works like ‘Stardust,’ the piano player describes a peaceful summer setting that includes “sweet oleander blowing perfume in the air.” Carmichael’s ability to relate the neighborhood streets of Memphis to listeners shows his musical prowess since there’s little documentation that states he ever spent any time in the Tennessee city.

I’ve Been to Memphis – Lyle Lovett

Introspective lyrics center around a protagonist in a diner contemplating both love and life. Referencing an uninterested woman sitting with him, with a clear romantic history that has since fizzled out, he wonders how he’s traveled to so many places (including Memphis and Muscle Shoals), yet still manages to know so little about women and love.

Memphis in the Meantime – John Hiatt

“I need to hear some trumpet and saxophone. You know sound as sweet as sin.” He was given less than a week to get his album Bring The Family recorded, but the pressure only made songwriter John Hiatt better. Now considered to be one of his most ingenious works, the opening track on the album, ‘Memphis in the Meantime,’ sets the tone and tells the story of a man tired of Nashville who longs for the big band music of Beale Street.

The title track to the Jerry Lee Lewis album Memphis Beat centers around Beale Street culture, the main stretch of road in Memphis, Tennessee known for its blues music history. Lewis associates the “Memphis beat” not just with a certain musical style, but with a way of life that’s “in your blood.”