14 Best Songs about Monday to Get You Through 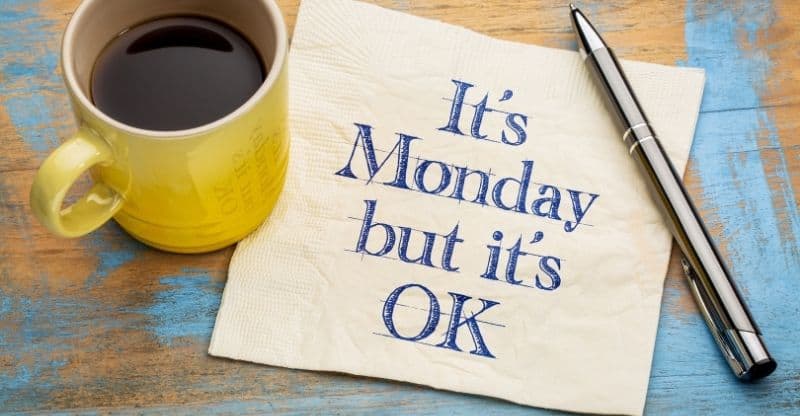 We’ve all been there – waking up and realizing it’s Monday, getting out of your bed with the soul-crushing realization that it’s the beginning of the week. Yes, it’s official. Mondays suck!

If only there was something that could make this easier…

There’s hardly anything better for a Monday playlist than a song that describes a typical Monday morning.

This 80’s masterpiece – which is many people’s favorite Monday song – was written by Prince himself and became one of The Bangles’ biggest hits. In the song, Prince describes a typical Monday morning of an average young lady who’s running late for work.

It’s safe to say that Prince’s Mondays were nothing like a Monday he makes fun of in the song.

Sometimes, all you need for a good Monday is some blues, and have we got the perfect Monday song for you!

In ‘Call It Stormy Monday,’ T-Bone Walker tells us that it’s not the idea of Monday that’s bad, but the things we feel that stick with us throughout the whole week.

Comparing Mondays to storms might be a bit harsh, but you’ll find there are plenty of songs that use storms to represent all sorts of gloomy situations!

Is there anything that can lift your spirits better than a classic dance record? We don’t think so, so let’s dance our way through the week!

This upbeat song deals with a not-so-upbeat subject. The singer sings about emotional manipulation that a person in love usually turns a blind eye to.

Need some more Manchester-based, Monday-related dance music? Then it has to be The Happy Mondays 🙂

Mondays can become much less depressing when they’re filled with love, and we’ve found a perfect love song for you.

Jimmy Buffett spent a lot of time touring, which, as a result, had him missing his wife, Jane. Mondays are something most of us dread, but for Buffett, it was the day he finally gets to be with the person he loves the most.

He says: ‘Come Monday, it’ll be all right, come Monday, I’ll be holdin’ you tight…”

Mondays can be depressing, which is why we have something that will shake you up and power you through to Friday.

‘Monday’ is all about romanticizing the lifestyle of a band member living on wheels trying to make it. You have a good band, but is that all it takes? Wilco shows us how hard chasing your dreams can be even when you have all the freedom in the world.

At the basic level, this is just another ‘I hate Mondays song,’ but on a deeper level, it’s much more serious. This 1979 hit – written by Bob Geldof – was inspired by a school shooting spree that happened the same year. When asked why she did it, Brenda Spencer, a 16-year-old shooter, said: “I don’t like Mondays.”

Because of its nature, the song was not a success in America, although it topped the charts in the UK. Our guess is that it hit a bit too close to home.

Love can be hard and love can be complicated, especially when one person just can’t seem to commit. When ‘Monday Morning’ was written, the Buckingham-Nicks duo was still a thing, and this song can be seen as a foreshadowing for what comes in the future.

We hear about a person who’s struggling with their partner’s commitment issues. One day I love you, the second day I don’t – is there anything worse than this kind of hot-and-cold attitude? This song tells us all about it.

Rainy Days and Mondays – The Carpenters

Do you know the one thing worse than a Monday? A rainy Monday!

In this song written by Paul Williams and Roger Nichols, the singer compares Mondays and rainy days, both of which make her blue. On days such as these, she only needs to be with people she loves.

For more on precipitation, check out our songs about rain playlist.

Monday, Monday – The Mamas and The Papas

Weekends are fun, but they always come to an end, and that’s what this song is all about.

Waking up on Monday, thinking the person you spent the long weekend with will still be there with you, but they are not. Now, all you can do is despise Mondays for all that they are.

This song, penned by John Phillips, starts positively and ends with the narrator being totally heartbroken about everything that Monday brought.

A beautiful little treat for our country music lovers! Many people consider this the saddest country song, and rightfully so. The story is about a man whose wife died, leaving him feeling lonely.

This beautiful song compares a grieving man to an empty church on a Monday morning, once full of faith but now completely empty and alone.

Let’s shake things up with one of Duran Duran’s catchiest tunes. There are two things this song could be about – courting a shy girl and revolution. How could they ever be related?

Our guess is that New Moon symbolizes rebirth and new beginnings, and so does revolution. And so does love.

Have you ever liked someone so much you wanted to start a revolution? Our singer definitely has. Our beautiful satellite has always been a great source of inspiration for many artists, resulting in some beautiful lunar-inspired songs.

Except for Monday – Lorrie Morgan

Getting over a heartbreak takes time – but recovery can be sweet. In this upbeat country jam, Lorrie Morgan takes us through the stages of heartache and recovery. Although her recovery seems easy, it took great strength for her to get there.

Getting over someone is never easy. It takes strength and effort, and sometimes time is the only thing that can heal you. Rest assured, however, because things always fall into the right place in the end.

If your main goal this week is simply making it through, don’t worry! This song is all about celebrating those little achievements and is one of the finest Monday songs on the list.

In this early R’n’B hit, Fats Domino depicts the feeling that each day of the working week brings. Zero motivation to work, tiredness, lack of sleep, and then the sweet relief of the weekend – this song has it all.

Sometimes it’s the beginning of the week, and all you can think about is the weekend – and that’s completely fine!

Even if you feel like the world’s turned its back on you, you’ve always got music to help you through it all.

Mississippi John Hurt shows us that you can always turn to music even in great pain and injustice and seek a remedy. In this Monday blues song, he sings about jail, labor, and injustice – and he makes a beautiful song out of it.

More songs about Monday (in case you needed more!)