16 Best Songs About Monkeys to Make You Hang Around 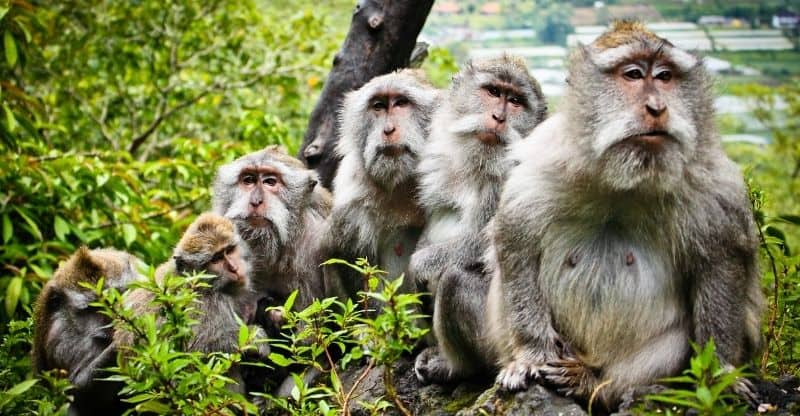 Animals feature a lot in songs, and none more so than the monkey.

That’s partly because the term ‘monkey’ gets used a lot in the English language (to ‘monkey around’, for example). The ‘monkey mind’ is also a term in Buddhism to represent the fidgety, easily distracted part of our conscious mind.

As we’ll see, many songs aren’t about monkeys at all, and use them as a metaphor for something else.

So here are the best songs about monkeys or monkey-themed songs ever written.

‘Tweeter and the Monkey Man’ – The Traveling Wilburys

This Dylan composition (under the Traveling Wilburys moniker) is a story of two criminals pursued by an undercover cop.

This crime song is set in New Jersey and includes several Bruce Springsteen song titles in homage to the Boss (e.g. ‘Thunder Road’ and ‘State Trooper.’)

‘Everybody’s Got Something to Hide, Except For Me and My Monkey’ – The Beatles

Unsurprisingly, this song has the longest song title of any Beatles song. With Lennon on lead guitar (not Harrison), it’s considered one of the fab four’s best rockers.

Who is the monkey? Lennon said it was about Yoko, “everybody seemed to be paranoid except for us two, who were in the glow of love” he said in a Rolling Stone interview. Curiously, many others (including McCartney) believed it was about Heroin, a drug Lennon was experimenting with at the time.

Despite many people believing this is a song about animal rights, Gabriel confessed in The Secret Life of Peter Gabriel by Chris Welch that it’s a love song that examines how jealousy (the monkey) can suddenly awaken when we fall in love.

The monkey is a metaphor for jealousy, basically.

This classic Pixies song from the late ’80s was quite ahead of its time. While the lyrics are somewhat ambiguous, it’s generally considered to It’s an environmentalist song about the human race (the monkey) destroying the world.

The lyrics highlight some of the main issues, namely pollution (“sludge from New York and New Jersey”), the greenhouse effect (“and if the ground is not cold, everything is gonna burn”), and the depletion of the ozone layer (“hole in the sky.”)

From The Stones’ celebrated ’60 album Let it Bleed, the brilliant ‘Monkey Man’ went largely unnoticed and didn’t get the attention it deserved.

That was until Martin Scorcese used it to great effect in his superb gangster caper ‘Goodfellas’ in 1990. The Stones dusted it down and played in on their Voodoo Lounge Tour in the mid-90s too.

‘Monkey and the Engineer’ – The Grateful Dead

Here’s a monkey song about a narrowly averted tragedy. This runaway train song depicts a train engineer who “drove a locomotive both far and near” with a monkey for company (not something you see every day but stay with it!).

When the train driver steps off the train to grab a bite to eat, the cheeky monkey “pulled the throttle, locomotive jumped the gun, doing ninety miles an hour down the mainline run.

But fear not, “switch operator got the message in time,” “I’m gonna let it through the hole, ’cause the monkey’s got the locomotive under control.”

A ‘Brass Monkey’ is an iconic alcoholic cocktail popular back in the day at hip hop parties. It’s typically made by adding orange juice to a 40-ounce bottle of Olde English 800 Malt Whiskey.

This tribute to the rapper’s drink of choice name-checks a ton of other beverages, too, including Martini, Chivas Regal Whiskey, and Moet champagne. This boozy number is great for a Friday night.

‘Monkey Man’ – Toots and the Maytals

Here’s a great song by ska and reggae group Toot and the Maytals.

The narrator waits for his girl to show up but hears she’s gone off with a monkey man (he ‘looks like a monkey’). “It’s not lie, it’s not lie,” she’s “huggin’ up the big monkey man.” Damn.

The Specials also did a great cover of this track, as did the late Amy Winehouse.

Anyone who knows their tools will know a monkey wrench is an adjustable piece of hardware for tightening or loosening up bolts.

In this Foo Fighters song, the term is used as a metaphor for being used in a relationship. “Don’t wanna be your monkey wrench,” Grohl sings (supposedly written about his ex-wife).

To understand this song, it helps to know that back in the day, an organ grinder was a street performer who often had a trained (real) monkey that would ask for coins, etc.

So back to the song. The monkey here symbolizes ‘the little guy’ who gets punished, while the organ grinder represents the one with the power (in other words, the boss) who is running the show and gets away scot-free, “Punish the monkey, and let the organ grinder go.”

It’s a song about sticking up for the little guy, who Knopfler has always defended with his working-class roots. Listen to ‘Money for Nothing’ (featured on our songs about money playlist) for another example.

Ever been harassed by a monkey? Well, Harry Belafonte has.

Appearing on the Jamaican-American pop icon’s 1961 album Jump Up Calypso, this fun song is about a monkey driving the narrator crazy everywhere he goes.

He drinks his gin (“Well, I drink gin, monkey drink gin too”). This monkey even has designs on his woman (“Mr. Monkey had my girl in a manly embrace.”)

With a reggae rhythm (which is quite unusual for the Boss), ‘Part Man, Part Monkey’ sees the Boss wading in on the evolution vs. creation debate.

There’s no doubt which side he comes down on (in case it’s not apparent, the evolution side). “Tell them soul-suckin’ preachers to come on down and see, part man, part monkey, baby that’s me.”

‘Too Much Monkey Business’ – Chuck Berry

If you feel like life is a drag, this song will be right up your alley. Here, the king of rock n’ roll sings about the general hassles of everyday life.

“Workin’ in the fillin’ station, too many tasks, wipe the windows, check the tires, check the oil, dollar gas.“

All this ‘monkey business’ is beneath “for me to be involved in.”

‘Monkeys’ – Echo and The Bunnymen

The meaning of this one is slightly opaque, but it’s such a good song that I figured it had to get included.

The word ‘bagsy’ is British slang for ‘stake a claim on,’ so, with that in mind, it appears there’s some bartering going on, “I bagsy yours, if you’ll bagsy mine.”

Is this a commentary on the pettiness of humans who are more like ‘monkeys’ than sensible, rational beings? Probably, but I’ll leave that for you to decide.

The chorus (‘key mon’) sounds a lot like the French phrase ‘qui ment’ (which means ‘who lies.’)

Elliot Smith was an artist of the highest order, a bit like Nick Drake (another troubled genius.)

Ok, this isn’t a monkey song at all!

It’s superficially a car song (a Coupe De Ville was a two-door coupe style motor made by Cadillac) – it’s actually a song about love.

Anyway, it includes the line “How long can I carry this monkey around,” so it just snuck into the list (any excuse to include a Neil Young song, basically :-))

More songs about monkeys (or with monkey in the title)