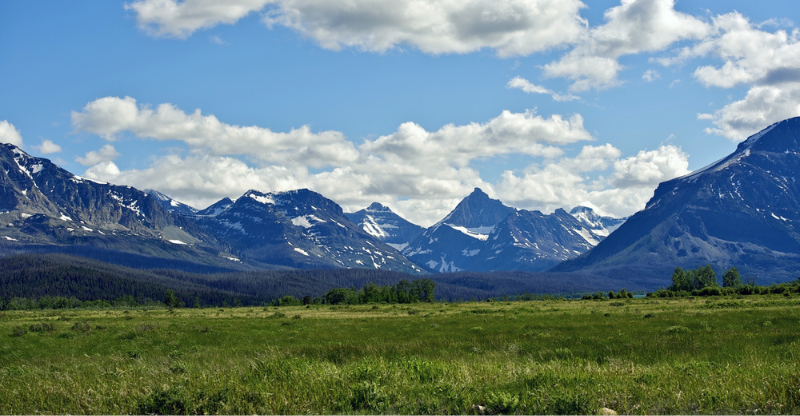 From its abundance of natural resources to historic battles and cultural significance for both the American cowboy and Native Americans, the Treasure State has an interesting history. Its untamed wilderness and mountains have always interested artists as well. With this playlist featuring songs about Montana, musicians from John Denver to James Taylor are included, who penned songs about the state’s beauty, rugged history, and cultural richness.

Country icon Hank Williams Jr. heads for the winter mountains of Montana to try and heal his heartbreak with ‘Montana Song,’ one of several releases that focuses on one of his favorite states. A melancholy, isolated picture is painted, with snow up to his knees, as he confesses to listeners his back-and-forth internal conversation about whether he should call up his ex or let her go.

Known for his zany performances and nonsensical lyrics, Frank Zappa’s ‘Montana’ was a common setlist addition for his live performances. Featuring a wide array of instruments, including sax, xylophone, and Zappa’s lead guitar skills, the story parodies moving out to the Montana wilderness to become a businessman, something many California residents were doing at the time of the song’s release in the ’70s.

Meet Me In Montana – Marie Osmond

Acting as a refuge for two people who were once lovers but separated to embark on different journeys, after coming up short with their dreams they decide to rekindle their romance in Montana. ‘Meet Me in Montana’ features a duet with singer Dan Sheals, who had a slew of hits in the ’70s. This classic country single hit the #1 spot on the charts in 1985.

A modern troubadour who kept the country-and-western music tradition alive well into the ’80s, John Denver often paid homage to the west’s vast, unbridled states with his songs. Country singer Emmylou Harris joined him for ‘Wild Montana Skies,’ which chronicles the rugged yet beautiful nature of America’s frontier days.

Country singer-songwriter Merle Haggard scored another hit with ‘Big City,’ an introspective single that finds the musician longing for Montana’s untamed landscape. Tired of the bustling cumbersome activity that often accompanies city life, Montana represents freedom to him; a way to reconnect with his own boundless spirit.

The realities of life on a rural Montana farm are poetically portrayed with songwriter Dave Stamey’s ‘Montana.’ The lyrics play out like a coming-of-age story, first with Stamey as a young boy learning to feed cattle, and ultimately with him as an adult reminiscing about all the lessons his father taught him. Montana takes on a role bigger than the state itself, when Stamey eludes to it becoming one’s spirit, as opposed to a simple location.

Rox in the Box – The Decemberists

Detailing the brutal process miners from the early 1900s had to go through in their line of work, ‘Rox in the Box’ is a historical creative piece and shines light on one of the industry’s worst tragedies. In 1917 Butte, Montana, 168 miners perished when a fire broke out in a copper mine and trapped miners underground. It is still considered to be one of the worst mining disasters in U.S. history.

I’ll Wait For you – Joe Nichols

Have a box of tissues ready when listening to this tear-jerker of a country song. In the opening verses of ‘I’ll Wait for You,’ the main character is stranded in Montana and phones his wife to inform her of his delay. They begin reminiscing on the phone, talking about some of their favorite memories involving Christmas and their growing family. Towards the end of the song (spoiler warning), a heart-breaking twist takes place when it is revealed the protagonist’s wife is terminally ill, and by the time he makes it out of the state it’s too late to say goodbye. Take a listen to find out the comforting role the song’s title plays in the story.

Learn about how pop star Justin TImberlake proposed to his wife, actress Jessica Biel, with his personal track, ‘Montana.’ Though the state isn’t mentioned until the very end, all the events leading up to it in the song detail the married couple’s engagement, which happened over a weekend spent in the snowy Treasure State mountains.

Canadian native Robbie Robertson first reached international fame with his rock group The Band, penning hits such as ‘The Night They Drove Old Dixie Down’ and ‘Up on Cripple Creek.’ In the mid-’70s, Robertson went solo and eventually released new material. ‘Showdown at Big Sky’ appears on his first solo effort, and details the fight for land between cultures of the American west. With his own roots cemented in Mohican ancestry, he approaches the song’s story from a Native perspective.

In 1975, the film Rancho Deluxe premiered starring Jeff Bridges. The comedic movie follows two Montana cowboys who make their living stealing cattle. Songwriter Jimmy Buffett contributed several songs to the film’s soundtrack, including the lively ‘Livingston Saturday Night,’ which focuses on getting amped up for a night out. Buffett even performs the track during a bar scene in the movie.

Pop singer Daya was used to working with electronic production for her releases, but when she sat down with an acoustic guitar to work on new material, her sound began to take a whole new shape. Her single ‘Montana’ encompasses her exploring new artistic territory. The tender track features the artist longing to get out of Los Angeles for a bit, and experience a state like Montana, one that is more in touch with nature and Earth’s pure elements.

A somber tune paying tribute to the American cowboy— hard work, long journeys, love, and loss are all wrapped up in Don Edwards’ ‘Say Goodbye to Montana.’ Chronicling a trip on horseback herding cattle from Texas to “Big Sky,” along the way the song’s cowboy laments romance that never blossomed, and the arduous journey which at times left him wondering if the pack would make it out alive.

“Who can imagine the scale of the forces that pushed this old mountain range up in the sky?” A song that plays like a devotional, Montana’s epic landscape is at the center of this 2015 James Taylor song. Like songwriter John Denver, Taylor was inspired by Montana’s vast mountain range and untouched lands so much so they moved him to exaltation. The song’s poetic lyrics highlight the pivotal role nature plays in one’s spiritual awakening.

“They all head for Montana at the foot of the Great Divide.” This “wild west rendezvous” details how cowboy sporting staple, the rodeo, brings different cultures together. From the hippies and college boys, to Native Americans and ranchers, everyone in this Ledoux number is on their way to a popular, crazy Montana rodeo.

“He’s as endless as the Montana sky.” Christian rock band White Heart compares God’s love to the vast ‘Montana Sky’ with this track from their album Emergency Broadcast. Featuring a large discography full of uplifting spiritual songs, White Heart formed in the early ’80s and performed together for over 10 years.

“…they say that this place could be the richest hell on earth.” This unapologetic patriotic tune representing both American and Montana pride highlights Butte’s tough past and beautiful present. Tim Montana pays tribute to the miners before him who built the town and sacrificed so much for it, while also singing about the Treasure State’s endless beauty and the joy he feels in being a part of the town’s historic legacy.