25 Best Songs about Mountains to Lift You Up 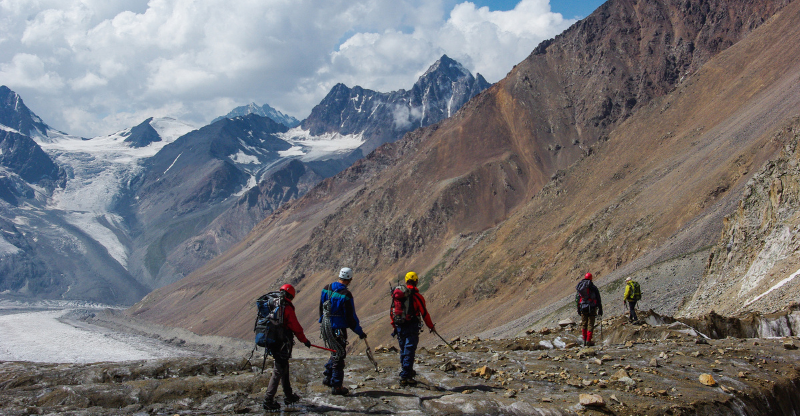 Whether you grew up in a mountain town or are taking a road trip through Colorado and need an inspirational playlist to accompany you on your journey, these tunes have you covered. From uplifting songs about Appalachian culture to deeply philosophical songs about man’s unbreakable bond with nature, here are songs about mountains ready for you to enjoy.

You Gave Me a Mountain – Elvis Presley

Country music songwriter Marty Robbins originally wrote this tune while reflecting on his heartache as a child due to his mother’s passing while giving birth to him and his subsequent absent father. Originally titled ‘Lord, You Gave Me a Mountain,’ many artists have covered it, including Elvis Presley, who performed it live at his famous televised concert, Aloha from Hawaii.

Written by band member Robert Plant during the height of 1960s and 1970s counter-culture, ‘Misty Mountain Hop’ is about all of the backlash the movement faced while attending grassroots-organized events promoting their ideals. The movement faced especially harsh criticism in England, where Plant came up with the song’s concept.

One of the recurring themes in John Denver’s songwriting is his deep relationship with nature. ‘Rocky Mountain High’ can be viewed as a transcendentally philosophical song at its core. Similar to lyrical elements in his popular tune about West Virginia, ‘Take Me Home, Country Roads,’ the inspiration behind this song came to Denver while witnessing the Perseid Meteor Show on a camping trip.

One of the most famous mountain songs, this timeless Motown classic featured in hit movies like Guardians of the Galaxy is a song about never letting any obstacle keep you from your loved ones. Though Marvin Gaye and Tammi Terrell are credited with the original version of the tune, Diana Ross and The Supremes later covered it, earning herself a #1 spot on the charts.

Related: This song is on our playlist of Guardians of the Galaxy music.

Fire on the Mountain – Grateful Dead

Not to be confused with Marshall Tucker Band’s song about the wild west that goes by the same name, the Grateful Dead’s ‘Fire on The Mountain’ is one of the band’s many popular tunes. Its lyrics deal with elements of self-destruction and living a balanced life. Between 1977 and 1995, the band performed the single 253 times.

‘Rocky Mountain Rangers’ is a punchy number featuring Wall’s gritty acoustic guitar and booming voice. Colter Wall combines notes from the old west with today’s smooth presentation, as only a modern cowboy can do. He performed this upbeat tune for several online concerts, including Radio Texas Live and his own series, Live In Front of Nobody.

Much like songwriting icon John Denver, Fleet Foxes’ lead songwriter Robin Pecknold often utilizes elements of nature in his writing. ‘Blue Ridge Mountains’ has a striking rural feel and draws on nature to tell its story. The tune is about Pecknold’s brother Sean, who he was missing when he was creating new music.

Thunder on the Mountain – Bob Dylan

Appearing on one of Dylan’s modern albums, ‘Thunder on The Mountain’ received a fair amount of radio play despite never being released as a single. It gained attention in the media due to his mention of fellow songwriter Alicia Keys throughout the lyrics. In true Bob Dylan fashion, the track is a lyrically driven story with commentary on the relationship between love and religion.

A popular song due to its inclusion in Miley Cyrus’ Hannah Montana movie, ‘The Climb’ is one of the singer’s more poetic tracks about the journey of living out your purpose in life. Rather than focusing on the end result as people often do, Cyrus reminds listeners, “it’s all about the climb.”

Mountain at My Gates – Foals

Foals frontman Yannis Philipakkis wrote this song with an open-ended purpose in mind. ‘Mountain at My Gates’ can represent different meanings depending on the listener. Some of the lyrics suggest it’s about living life to the fullest while here on Earth, while others have leaned on the song’s message as they recover from addiction.

Townes Van Zandt is something of a mythical creature within the professional songwriting industry. He died prematurely, leaving behind a body of work that is vast but unfinished. ‘My Proud Mountains’ is a love song penned to the great state of Colorado. Even though the songwriter was born in Texas, he was in awe of Colorado’s unbridled natural landscape.

Sugar Mountain’ is a coming-of-age tune. Neil Young wrote it when he was only 19 years old. He was in a transitional period in his life, having just left the band The Squires and being in between gigs. Shortly after he wrote the song, he met Stephen Stills for the first time. The rest, as they say, is history.

Related: Check out our playlist of farewell songs.

‘High on a Mountain Top’ is classical country roots music with a Kentucky twist. Loretta Lynn grew up in a coal mining family, and that culture greatly impacted her songwriting. She was a pioneer for other female songwriters in the country music industry, earning countless #1 spots with her singles, even though tunes she wrote were sometimes too controversial to release on the radio.

Said to be the first song Harry McClintock ever wrote, this traditional folk song has taken on many different versions over the years. The tune is a zany, sometimes controversial song about a down-and-out vagabond who accidentally discovers a utopia right here on Earth. Though McClintock has discussed the meaning of the song in the past, the listener can still draw their own conclusions when listening to it.

The Foggy Mountain Boys formed in 1948 and went on to record ‘Blue Ridge Cabin Home’ in the early 1950s. It became one of their more popular tunes due to its highly relatable topic, a song about home and loving where you are from. One of the band members, Earl Scruggs, would become a bluegrass icon due to his banjo playing skills.

A song about absolute devotion to your sweetheart, music industry giant Phil Spector produced this song specifically for Turner’s vocal prowess. Though the song initially flopped in the States, it was a massive hit in the UK, which earned Ike & Tina Turner a spot on The Rolling Stones’ 1966 tour as the opening act.

Created during a recording session in 1971, this song sports a legendary cast. Greats such as David Crosby, Jerry Garcia, and Gracie Slick collaborated on this song about moving to the mountains and making them your home. The musicians focused on improvising lyrics around the hook, “Gonna make the mountains be my home.”

Written by the Scottish band’s frontman Simon Neil after his mother unexpectedly passed away, he penned this tune while figuring out where his life would lead him after such a significant loss. This rockish tune is the band’s biggest hit so far. Though they hail from Scotland, they recorded the song and subsequent album, Only Revolutions, in Los Angeles.

Folk-rock band Midlake’s ‘Small Mountain’ tells an Appalachian-inspired story of a mountain “giving what it can.” With references to gold and working the mountain, as you listen to the song, you learn about the protagonist trying to build a life full of hope while going through the hardships mining often brings.

Sing to the Mountain – Elephant Revival

Hailing from Colorado, the state’s rugged terrain’s influence on this folk group is apparent. In ‘Sing to the Mountain,’ the band paints a picture of a joyous occasion taking place by a mountain. They tell the listener to embrace life, “sing to the mountain,” and be joyful. Drawing on lessons from nature as so many other talented songwriters do, they remind listeners of our unbreakable bond with mother nature.

Considered to be country music royalty, Dolly Parton comes from humble beginnings. ‘My Tennessee Mountain Home’ is an ode to her rural mountain upbringing. Throughout the song, she looks back on her memories fondly about growing up in east Tennessee surrounded by babies and front porch leisure. She shared her childhood home with eleven other siblings.

Rhiannon Giddens is well-known for her bluegrass-style banjo playing. However, she’s recently received attention in the country music industry for her songwriting abilities. She takes pride in fusing genres from bluegrass and Celtic to country and folk in her music, a product of her multi-cultural familial background.

Vince Gill’s 1994 single ‘Go Rest High on That Mountain’ is significant to the country superstar. Following the untimely death of country songwriter Keith Whitley, who penned hits such as ‘I’m No Stranger to The Rain,’ Gill wrote a tribute to him. It wasn’t until his older brother’s death that Gill finished the tune a few years later. He dedicated the song to Whitley and his brother when he sang ‘Go Rest High on That Mountain’ at his induction into the Country Music Hall of Fame in ’99.

‘Misty Mountains’ is known as “the dwarf song” in J.R.R Tolkien’s film adaptation of his famous book, The Hobbit. Armitage, an actor by trade, impressed the crew when they found out he could actually sing the song in the film instead of needing a vocal double. He began every day on set by belting out ‘Misty Mountains’ with his baritone voice.

‘Climb Every Mountain’ is an inspirational song from the hit musical, The Sound of Music. Performed at the end of the first act, it stands as an uplifting number for the audience, reminding them to take every step possible to reach their dreams. The Sound of Music debuted in 1959 as a musical before being adapted for film.