Learn about the Legends with These 30 Songs about Mythology 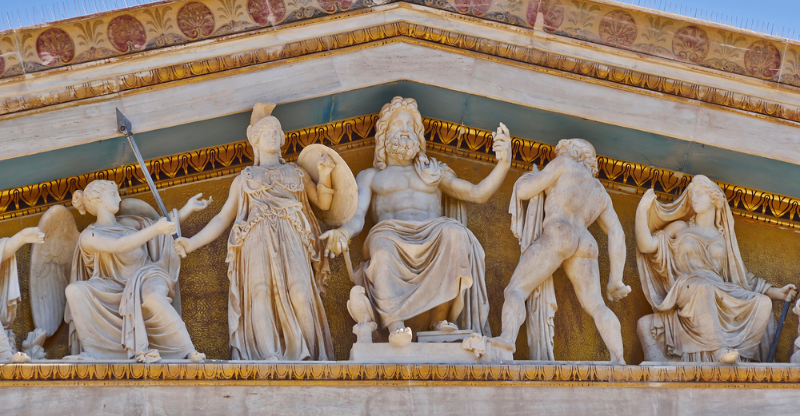 Mythology captivates its audience in numerous ways. Many myths of times past and present have something to teach us, too.

Musicians have also been affected by mythology, as evidenced by the many songs written on the topic. Here are some songs about mythology that can introduce you to famous myths or remind you of your favorite stories from Greek and Roman folklore.

‘Ulysses’ is named after James Joyce’s novel of the same name, which was on Franz Ferdinand’s third studio album. The song is related to the novel’s story but is also about being lost in the world while embracing it, using mythological imagery throughout. The song was meant to be similar to a pop song without following pop conventions, much like how Joyce’s novel was far from conventional.

Related: Read our list of the best songs that go with books.

This song’s “Cupid” dates back to the Roman god of love. Its lovesick story of unrequited love was inspired by a girl who was seen wistfully gazing at Perry Como on The Perry Como Show. Sam Cooke had a chart hit with the track; several covers also became hits.

Related: Have you been struck by Cupid? Check out these best songs about wanting someone you can’t have.

Iron Maiden retells the classic Greek Icarus myth with this track. The song twists the story from Icarus defying his father to him obeying his father, who tricks him and leads to his demise. ‘Flight of Icarus’ was the band’s first single in the United States.

Related: We’re not lying – here are the best songs about honesty.

This song draws on the traditional Muses, who were characters that were daughters of the greek god Zeus and Mnemosyne in Greek mythology. In this track, Bob Dylan specifically asks Mnemosyne for artistic inspiration – similar to the Greek poem The Odyssey, which Dylan has named as being influential in his career.

Zeus in the Architecture – Art vs. Science

The protagonist here says that he sees “Zeus in the architecture.” He talks about power, the greatness of statues, and the futility of resisting change, though the lyrics are somewhat abstract. The song says true to At vs. Science’s hybrid of dance, rock, and punk music with a bold sound.

Related: Head over to our powerful songs playlist.

Sara Bareilles’ song ‘Orpheus’ refers to the mythological Greek poet and musician of the same name. It is a perseverance anthem that encourages listeners to stay strong and remain hopeful amidst personal or societal change: “No fear. Don’t you turn like Orpheus. Just stay here.” According to mythology, Orpheus wasn’t supposed to turn around under Hades’s orders. When he did, his love, Eurydice, had to return to the underworld.

Related: Find the strength with these songs of resilience.

This song refers to Robert Plant’s travels in Greece, Morocco, and Spain. It also references the Atlas mountains in a way that ties into mythology. The song’s sound and lyrics were inspired by famous poetry and the Moroccan and Flamenco musical traditions.

The title of this song does not tie into its lyrics, but the song contains chaotic themes that fit with the story of Pandora. There are numerous other references within the detailed lyrics, however, such as mentions of classical composer Handel and the fictional fairy tale character Snow White.

Carve Away the Stone – Rush

Rush sings of the Sisyphus myth in this track. Sisyphus is a Greek mythology character who was supposed to be the king of Corinth. He was said to be condemned to rolling a stone uphill forever as it continually rolled back down, which is what this song talks about in its lyrics.

Laura Marling compares herself to the mythical Undine in this track. The German mythological water nymph vengefully cursed her ex-lover to stop breathing if he fell asleep after he was unfaithful to her. It’s hard to tell if Marling suffered a similar heartbreak or a different type of pain altogether.

Related: Get even with these vengeance songs.

This was inspired by Eric Clapton’s trips to the Greek Islands and refers to the hero of The Odyssey. The song is all about Ulysses, as the title suggests. The wah-wah pedal gives the song a psychedelic sound typical of Cream and similar artists in the late 1960s.

This song—which features Matisyahu—came about after MC Yogi had an epiphany about his own level of happiness. He shows listeners within the song that you can take yourself to a heavenly state on Earth with the right mindset, no matter what is going on in life.

Related: Listen to these glorious songs with heaven in them.

While this is often considered to be Gene Simmons’ signature song, fellow Kiss bandmate Paul Stanley was the one who wrote it. Stanley’s original was much more energetic and upbeat, while the released version sounds slower and even sinister. The lyrics paint the song’s protagonist as a dark “God of Thunder” and refer to various ancient myths.

Related: Did you hear that!? It was the boom of these thunderstorm songs.

This parody tells a story from the point of view of a mythical minotaur. A minotaur in Greek mythology has a bull’s head and a man’s body. On a deeper level, the song is about the war machine, even if it is presented in a humorous way.

In this piece, Lady Gaga sings about Venus, the famous Greek goddess of love. She says she wants to dance every time she hears her name and talks about Venus, the planet, as well as other planets. The Birth of Venus painting is featured in part on the cover of the album this song appears on.

The Changeling – The Doors

Changelings are mythological creatures said to be switched out for human babies. Jim Morrison compares himself to changelings in this song, as they are unpredictable and don’t fit in with the rest of society. The song may have been inspired by the 1968 film Changeling.

Related: Not feeling yourself? It’s okay. Here are the best songs about insecurity.

Eminem criticizes other rappers and some hip-hop fans’ taste in this diss track. Since he considered himself to be a “rap god,” he compares himself to Zeus in the track and the title. The song also honors those who have fallen victim to police brutality and highlights Eminem’s desire for racial equality.

Faust, Midas, and Myself – Switchfoot

As the title suggests, this song compares two mythological characters to a real person. The protagonist has sold his soul like Faust but has reaped benefits from it like Midas, a king from ancient Greece who turned everything he touched into gold. It shows the importance of living the life you have as happily as possible rather than turning to questionable means to find satisfaction.

Here, Suzanne Vega sings as Calypso, who saved Ulysses from drowning because she loved him. Vega wanted to continue the sea nymph’s story, as she only appears briefly at the beginning of The Odyssey. The song finds Calypso on the night before Ulysses leaves her.

The Fisher King is famously known as a fictional character who is wounded and told to protect the Holy Grail. This song finds the mythical king living in the abandoned Battersea Power Station, a scary landmark in South London. The song is also partly about people making mistakes over and over again in a sympathetic way.

Related: We all mess up. Here’s our songs about regrets playlist.

This ABBA track is about the fall of Troy. The title refers to the Trojan princess Cassandra, to whom the narrator apologizes. She was cursed with a punishment where no one would believe her predictions as a prophetess, according to legend. She predicted the fall of Troy but was not believed.

Sonata Arctica tells the tale of Endymion and Selene in this track. Selene was a goddess who fell in love with the shepherd Endymion, who was put to eternal sleep so he wouldn’t age and could be Selene’s love forever. The song tells the story from the shepherd’s perspective.

Origin of the World – David Keenan

The Gustave Courbet painting with the same name and the story that inspired it are the subjects of this track. The song explores how love and exploration can be risky for their subjects, and how the element of danger can be what draws people back to them again and again.

Related: Get inspired by this music about art.

This HIM track refers to an old myth about seven towers. It shows how young people should be allowed to make their own mistakes in life and come to their own conclusions about things rather than being influenced by society through politics or religion.

You Will Ride with Me Tonight – Dar Williams

This appears on a Dar Williams album that heavily uses mythological themes from Greece. ‘You Will Ride with Me Tonight’ frames the god Hermes, the messenger of the dead in Greek mythology, as a biker. He ends up seducing an older woman rather than informing her of her death, as he apparently has a thing for mature ladies!

A man splits from his wife, Isis, in this track. He sets off on an adventure to find a new life and keeps thinking about Isis as he and a new traveler friend hunt for treasure. The “Isis” character comes from Egyptian mythology and likely symbolizes Bob Dylan’s then-wife Sara.

Related: Head out somewhere new with our adventure songs playlist.

Fly Golden Eagle sings a track that is possibly based on the story of Psyche and Eros here, as it explores themes of a jealous mother getting in the way of a romance. It seems to be about two young people falling in love and even refers to the mythological Apollo.

Related: Don’t get jealous! We’re happy to share these songs about envy.

This song explores the questions a successful businessman has when his money runs out. The title refers to the story of King Midas, who turned everything he touched into gold—which led to consequences for everyone involved.

Here, Anthrax refers to Medusa, who was cursed with snakes for hair and turning everyone she saw into stone. She is portrayed as a temptress who leads men to their doom in this track. It shows men how to reduce temptation by devious women, which seems to be a common theme in heavy metal tracks.

‘Venus’ is one of many famous tracks with the goddess of love at its center. The male protagonist here asks Venus to send him a woman to love who is her human equivalent. This was the first of two Frankie Avalon singles to hit number one in the United States.