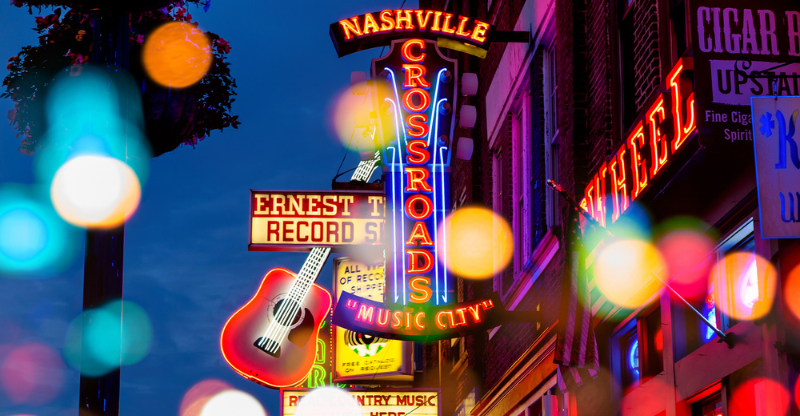 One of the world’s music capitals, Tennessee’s bustling town of Nashville is known as “Music City,” and is home to the country music genre. From famous locations like Music Row and the Broadway strip to the tourist destination’s new title as “Bachelorette Party Capital of The World,” this playlist highlights the history of the singing cowboy and the modern highs and lows of today’s Nashville music industry. Featuring greats like George Strait and Hank Williams Jr., check out these songs about Nashville.

Music Row is an area of Nashville that is home to much of the country music industry’s business side. The deals that take place on Music Row shape the direction commercial country music heads in. ’90s country icons Alan Jackson and George Strait team up for their song ‘Murder On Music Row,’ which details how the new wave of music played on country stations isn’t really “country” at all.

Woke Up in Nashville – Seth Ennis

Pursuing a music career in Nashville often means giving up much of your personal life. Singer-songwriter Seth Ennis contemplates everything he had to leave behind in his hometown, including a woman he loved, in order to move to Music City to try and make it. The pensive tune comes full-circle at the end, with Ennis realizing what he had back home was really the dream, not the one that supposedly resides for so many starry-eyed songwriters in Nashville.

The changing country music landscape of the ’60s is documented with ’80s single ’16th Avenue’ by Lacy J. Dalton. Preceding country music’s first modern commerical boom of the ’70s, much of residential Nashville was repurposed into office space for business. The “16th Avenue” referenced in the track chronicles the rise of Music Row in Nashville, and the rise of modern country music.

“So long, Nashville, Tennessee. You can’t have what’s left of me.” For years, Stapleton stayed in the shadows of Nashville, penning hits for artists while letting them handle the limelight. After the debut of his album Traveler, that all changed. Suddenly, the singer-songwriter had to deal with fans showing up at his Nashville home. His sorrowful track ‘Nashville, TN’ documents his move from the music city to a rural farm nearby in the small town of Franklin.

Wrong Side of Memphis – Trisha Yearwood

Written by Matraca Berg and Gary Harrison, ‘Wrong Side of Memphis’ tells the story of a singer who decides to move away from Memphis and head northeast to Nashville, where she thinks she’s got a better shot at fame. When Berg penned the track, she never thought it would get picked up by an artist because its sound is not typical of Nashville hits. Aside from its bass-heavy Drop D tuning, the song lacks a traditional structure, and doesn’t feature a stand alone chorus.

“”The devil walks amongst us. And Nashville is his bride.” Much of his album The Outsiders contains dark themes dealing with evil. ‘Devil, Devil (Prelude: Princess of Darkness)’ is part of a trilogy that encompasses the gritty, dark underbelly of the Nashville music industry. While Church has said the views expressed in the songs aren’t his own, they represent so many artists he knows who have been wronged by executives in the industry.

Nashville Without You – Tim McGraw

Folk-country songwriter Ruston Kelly helped pen this track which appears on Tim McGraw’s album Two Lanes of Freedom. Acting as a love note of sorts to the woman he loves, McGraw makes direct references to famous country songs like ‘Ring of Fire’ and ‘Blue Eyes Crying In The Rain’ to drive home the message that without his lover with him, Nashville would be “just another river town.”

If you spend any time on the Broadway strip in Nashville, you’ll witness a multitude of expert musicians performing in countless live music venues. Lovin’ Spoonful’s song ‘Nashville Cats’ pays tribute Nashville’s extensive history of talented artists, including those like Roy Orbison and Johnny Cash who recorded with the popular Sun Records (in Memphis) at the time of the song’s release in ’66.

Down on Music Row – Dolly Parton

Part of her album My Tennessee Mountain Home, ‘Down on Music Row’ is one of several tracks on the concept project which detail Dolly Parton’s journey from rural Tennessee farm to Nashville’s entertainment industry. The song features Dolly securing a deal with RCA records after spending time walking up and down Music Row, meeting with any record executive who would take the time to listen to the early songs she’d written.

When corporate country closed the door on Aaron Watson, saying he’d never make it in Nashville, he drove back to his Texas home and wrote ‘Fence Post,’ declaring he’d “rather be an old fence post in Texas than the king of Tennessee.” He continued to work on his music career without the help of a Nashville label and his hard work ultimately paid off. With the release of his album The Underdog, he became the first “solo male artist” to land a number one chart spot for an independently, self-released album.

“Old Nashville cowboys will sing for a dime.” Featured on his iconic Whiskey Bent and Hell Bound album, outlaw Hank Williams Jr. shows that he knows all too well the age-old story of the aging musician being put out to pasture with ‘Old Nashville Cowboys.’ The honest, raw track shines light on the way music row uses up the best of young singing cowboys, then forgets about them the second they’re no longer profitable.

Described as “depressing” by the Lady A bandmate himself, Charles Kelley’s ‘Leaving Nashville’ is a deeply personal recording effort about the manic-depressive nature of being a songwriter in the country music mecca. Even though he didn’t pen the track himself (that credit goes to writers Abe Stoklasa and Donovan Woods), when he heard it for the first time while looking for material for his solo album The Driver, he immediately related to its story.

Since 2018, Nashville has been voted “Bachelorette Capital of the World.” Country artist Willie Jones sings about this zany phenomenon over an infectious beat and banjo rolls in ‘Bachelorettes on Broadway.’ In the video, he hops aboard one of the music city’s famous “pedal taverns” as he sings. While strolling Broadway, watch out for these mobile bars-on-wheels, a favorite activity among visiting bachelorette groups.

Appearing on one of country music’s most beloved and critically acclaimed albums, Will The Circle Be Unbroken, Nitty Gritty Dirt Band references many of the genre’s legendary musicians with their tune ‘Grand Ole Opry Song.’ From Roy Acuff to Hank Williams, the group pays tribute to country music’s pioneering forces. Many key figures like Maybelle Carter were featured in collaborations on the album as well.

English country music duo The Shires talk about building their own “Nashville” with ‘Nashville Grey Skies.’ The lyrics paint the picture of their own country music mecca having rain and chilly temps too cold for “cut off jeans.” But that’s okay because their culture is still full of people who are “country boys at heart.”

This Town Is Killing Me – Caitlyn Smith

A veteran songwriter in the music industry who has spent time in music towns ranging from Nashville to L.A., Caitlyn Smith has now released several of her own projects, including the moving, authentic single ‘This Town is Killing Me.’ The honest lyrics talk about the love-hate relationship one has while trying to make it in the music industry, often experiencing flashes of success then going right back to playing background music for a bar crowd.

I Love This Town – Bon Jovi

Rocker Jon Bon Jovi has long loved the electric music culture of Nashville, sometimes even opening restaurants and bars in the area. With ‘I Love This Town,’ he sings about all the ways Music City is so special, including its friendly residents, passionate musicians, and rowdy bars. He first performed the song while on tour in Nashville at the Cannery Ballroom venue.

As songwriter Rodney Crowell effortlessly delivers lines echoing the worries of others that Nashville is growing at a rapid rate, he underpens his sentiments with powerful history lessons. Referencing some of country music’s key figures like Steve Earle and Guy Clark, he wonders what will happen to the legend of country music as Nashville becomes so commercialized. The song’s title, ‘Nashville 1972,’ is a nod to the town’s heyday, when country songwriters like Willie Nelson helped bring attention to the genre on a national scale.

The effects of Music Row business dealings cross international waters with European musician Frank Turner’s ‘Nashville Tennesee.’ Though graceful, melodic lines paint the picture of a musician trying to stay true to his artistic self despite outside influences, beneath the surface, a slightly more critical take is found, and is pointed at musicians who adopt a cliche sound just to try and impress American markets.

“Hollywood with a touch of twang.” If there has even been a country musician who gave his all to make it in Nashville, it is Jason Aldean, who drained his bank account several times and almost quit music all together before talent scouts randomly found him playing in a dive bar. He tells his story through his song ‘Crazy Town’ with every ounce of emotion he can muster. Though never outright mentioned in the song, Nashville’s new nickname, “Nashvegas,” is front and center as well with references to rampant tourist growth.

Hank the 3rd comes from a long line of rebels, including his grandfather Hank Williams, and his own outlaw father Hank Williams Jr. With his fearless song ‘Trashville,’ he unabashedly lets his misgivings about Nashville’s music industry be known. While he wishes he could skip town and head to Texas, he confesses, “They’ve done taken me for so much. That I can’t get out now.”

This early country hit from the ’60s was written by Karl Davis, and recorded by country performer Frank Locklin, who received a career resurrgence after its release thanks to chart success. Davis wrote ‘The Country Hall of Fame’ in honor of country stars like Patsy Cline who had recently been inducted into the respected organization at the time.

A common saying in Nashville among aspiring and veteran songwriters is that it’s a “ten year town.” This means that while reaching success in other music capitals like Los Angeles can seem like a sprint at times, in the Tennessee music hub, it’s more like a marathon. During a co-writing sesssion with fellow songwriter Brandy Clark, Hailey Whitters used her frustrations experienced over 12 years while trying to make it in Nashville to pen her now fan-favorite track, ‘Ten Year Town.’