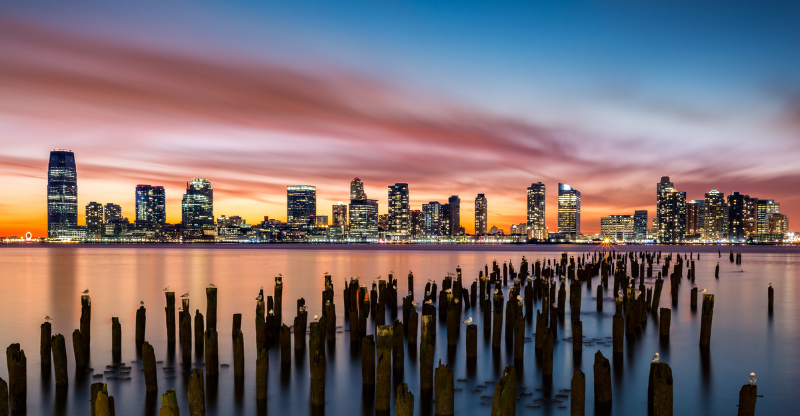 New Jersey, aka The Garden State, is known for its gorgeous beaches, casinos, boardwalks, and food (one look at the popular Taylor pork roll, and you’ll see why).

Here are some of the best songs about New Jersey to help you learn more about this fascinating US state.

The narrator here is in love with a girl from New Jersey. The song was written about Tom Waits’ wife Kathleen Brennan, who he had just married after a troubled relationship with Rickie Lee Jones. Bruce Springsteen covered the song at many concerts and felt a connection to the male character in it, who is similar to a character in his songs ‘Rosalita’ and ‘Sandy.’

This track pays homage to Bruce Springsteen in a lighthearted way. It was written by Bob Dylan and makes numerous references to Springsteen’s songs while telling the story of two anti-heroes in Jersey City trying to escape from the law. While some listeners feel that the song mocks Springsteen, Dylan’s intention was to praise him and use him as a symbol of New Jersey.

‘Big Casino’ contains literary references used in a non-pretentious way. The song seems to be about someone trying not to give up on dreams of success as a musician. He isn’t succeeding but is trying to help other up-and-comers figure out a way to make it big.

The narrator here is writing a song about his heartbreak while he is experiencing it. He wants his ex to realize how much he hurt her, so he wants to ensure he highlights his pain in the chorus so she can feel it. He feels colder living in Jersey now than ever, because he is afraid everything good they had was a lie.

This track’s protagonist used to know a famous person when they were both young. It seems that this person is a woman that he has feelings for. He is still waiting for her in Hackensack, New Jersey: “But I will wait for you/As long as I need to/And if you ever get back to Hackensack/I’ll be here for you.”

You Can’t Catch Me – Chuck Berry

Chuck Berry’s experience when returning from New York City to the New Jersey Turnpike inspired this track. It’s about hot-rodding with “competitors” on the road. At one point in the song and in real life, Berry wished he could take off and fly in his car as a sort of prayer.

Here, we meet a narrator who is looking forward to summer on the New Jersey shore and the romance he may find there. He seems to have a love interest in mind to have happy memories with like he did in the past.

Queen Latifah represents New Jersey and sings of her memories there in this track. She lives in California but misses her home. Her family and friends are in New Jersey, so there is a great deal of love to remember there.

Walk Through the Bottomland – Lyle Lovett

Lyle Lovett tells the story of a lady from New Jersey and a rodeo cowboy who meet and quickly fall in love. Unfortunately for the lady, her cowboy decides he has to stay with the rodeo life that he knows and loves and leaves her behind. She never marries because she is still in love with him and has ruined her reputation by being with him.

This is a cover of Bruce Springsteen’s that was widely considered one of The Band’s best live performances after they reunited as a group. The song itself is a dark piece about a couple who escapes to the Atlantic City resort in New Jersey; the man moves there with the intention of becoming a criminal. On a wider scale, the song talks about hope in a city rife with crime.

In this piece, Freddy Cannon goes to Palisades Park to find fun and romance. He meets a girl he likes and they have a fun time together. They even kiss on top of a ferris wheel, encouraging Cannon to recommend that his listeners visit Palisades Park to have an adventure.

Ella Fitzgerald sings of a dance called the “Jersey bounce” here. She talks about how it got started and what it sounds like. She sings that the music will make you want to dance even if you weren’t originally in a good mood and didn’t want to partake.

The narrator of this Cole Swindell track is happy with a fun-loving romantic interest. He likes that she likes to get up to trouble with him and encourages those around her to let loose and have a good time. He looks forward to the wild night that they will have together.

John Gorka explains to listeners that he is from New Jersey in this track. While he says that he doesn’t quite belong there, he also demonstrates how growing up in the state shaped who he is. He explains what makes New Jersey residents unique: “New Jersey people, they will surprise you/’Cause they’re not expected to do too much.” He also says that being from there has made him stronger.

So Jersey – The Bouncing Souls

This track pays homage to the legendary artists who came from New Jersey. It talks about the hardships that the state’s inhabitants endure and talks about a male and a female character who are trying to live out their dreams in this state and find a new life despite the setbacks they have experienced.

Eddie Rabbitt sings of his childhood as a “Jersey Boy” in this piece from his album of the same name. He remembers his first friend and all of the places he used to spend time. He also talks about the beginning of his career and reflects on how fast life moves by while also feeling long.