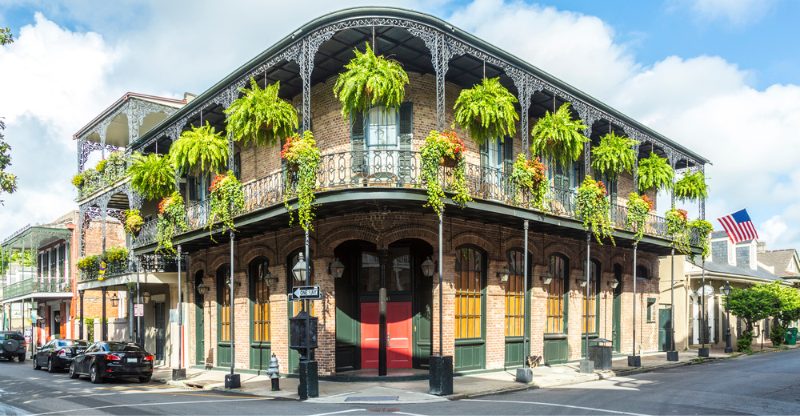 New Orleans’s history is riveting, sometimes haunting, and always interesting. For centuries, musicians have been penning songs dedicated to the home of one of America’s favorite pastimes, the Mardi Gras Festival.

From historic battles and ancient religions like Voodoo to iconic Louisiana artists like Fats Domino and Louis Armstrong, check out this list of songs about New Orleans to learn about its rich culture, music, and artists.

After performing for years, musician Mac Rebbenack decided to transform his career and reinvent himself as Dr. John just before releasing his first solo album. Fusing jazz, blues, rock, and other genres prevalent in New Orleans, the session musician created an eclectic sound and memorable persona. ‘Sweet Home New Orleans’ appears on his 1998 album, Anutha Zone.

House of the Rising Sun – The Animals

Detailing a man’s descent into the darker side of New Orleans, ‘House of the Rising Sun’ references a popular brothel that uses a sun symbol as a marker for men passing by looking for a bit of fun. The song has been around for so long debate is still going on regarding its exact origins. Blues greats like Lead Belly have covered the track. The Animals’ gritty, rocking 1964 cover experienced widespread success and became their signature hit.

Related: This song features on our playlist of songs about sunrises.

“I’m going back to the Crescent City, where everything’s still the same.” Folk songwriter Lucinda Williams reminisces about the French-Cajun culture she loves as she returns to ‘Crescent City.’ References to the New Orleans lifestyle appear throughout the song as Williams completes her journey. She longs for the sound of her Zydeco and the blues playing in bustling bars. Popular French sayings even pop up in the song, like, “Tous les temps en temps. That’s what we say.”

No city throws a party quite like New Orleans, and musicians have long celebrated this special talent of The Big Easy. In 1949, Henry Byrd (who goes by his stage name Professor Longhair) recorded ‘Go to the Mardi Gras’ as a celebratory, R&B-style theme song for events. Since then, popular musicians like Fats Domino have also recorded the festive track, making it one of New Orleans’ go-to songs while partying it up for the world-renowned festival.

Frontman John Fogerty never lived in the repurposed swamplands of the south. He was a California native, but that didn’t stop him from writing a popular, authentic rock tune about growing up on the bayou. He was inspired to write ‘Born on the Bayou’ after playing a show in Baton Rouge and becoming acquainted with the culture of Louisiana. He even wrote several tunes for an album titled Hoodoo, but the project was never released.

Songwriter Tom Waits perfectly captures New Orleans’ distinctive neighborhoods with his grainy yet dreamy track ‘I Wish I Was in New Orleans (In the Ninth Ward).’ With references to late nights in dive bars, card games, and close friends for company, heavy saxophone work accompanies a piano and Waits’ voice as he remembers the town he dearly misses.

Related: If you’re enjoying this song, you’ll love the best songs with saxophone.

O Brother, Where Art Thou? music supervisor T-Bone Burnett helped Steve Earle produce his track ‘This City.’ A surprising addition to the song, which Earle wrote for the show Treme, is the appearance of actor Tim Robbins on the track, who lends his vocals. Horns are also prevalent, which gives the song an ideal Cajun feel.

Despite the song’s lyrics containing a melancholy story (a guy is making his way towards New Orleans as he thinks about his lover who’s left him), the lively rhythm and instrumentation leave listeners jovial, which is what musician Fats Domino strove for. The story goes he came up with the concept for the song after his car broke down and he heard someone yell, “Look at Fats Domino! He’s walking!” As he tried to find help, he laughed it off and simply replied, “Yeah, I’m walking.”

Drop Me Off in New Orleans – Irvin Mayfield and Kermit Ruffins

A horn section, rollicking drum beat, and playful bass capture the essence of downtown New Orleans. Featuring a collaboration between Irvin Mayfield and Kermit Ruffins, ‘Drop Me Off in New Orleans’ is a local favorite and was released on their 2017 album, A Beautiful World.

If you’re looking for the perfect song to add to your Mardi Gras-themed playlist, The Meters’ ‘Mardi Gras Mambo’ is a great pick. Written by musicians Frankie Adams and Lou Welsch and first released in 1954 by another group, the Hawketts, The Meters’ ’75 version quickly rose to popularity. Their version has since become one of the most recognizable Mardi Gras songs ever recorded.

Also featured on the HBO show Treme, Lil’ Queenie and The Percolators’ ‘My Dawlin’ New Orleans’ showcases raw, relatable lyrics with a dogged rhythm section not for the novice musician. Known by her stage name Lil’ Queenie, artist Leigh Harris released the track in 2018 on her album Purple Heart.

A languid jazz classic featuring raspy vocals and Louis Armstrong’s brilliant saxophone work, the jazz/blues icon fondly looks back on his roots with ‘Boy from New Orleans.’ Released alongside his popular rendition of ‘What a Wonderful World’ in 1968, the laidback song is a perfect addition as background music to a lazy Sunday spent in the French Quarter.

Related: Keep your lazy day going with these songs about doing nothing.

Re-released in 2005 in collaboration with the Louisiana Philharmonic Orchestra after the Hurricane Katrina tragedy, Randy Newman’s ‘Louisiana 1927’ first debuted in 1974. The song is about an actual flood in late spring of ’27 when bad weather caused significant flooding across New Orleans. The flooding was made worse when levees were destroyed to try and re-route water to less populated areas.

Related: Nature inspires art. Here are some more songs that mention the weather.

Appearing on their 1976 album Presence, Led Zepplin reference a real hotel with their track ‘Royal Orleans.’ It was their favorite place to rest when they came to town, but the song had little to do with the establishment. The song’s wild story follows a guy who unknowingly takes a drag queen home from a bar, only to discover the truth the following morning.

Originating in Baton Rouge, LeRoux released music in the ’70s and ’80s and experienced both regional and national success. Their catchy tune, ‘New Orleans Ladies,’ a celebratory tribute to the spunky women of Louisiana, became a huge success in New Orleans and surrounding areas after its release in 1978.

The Witchqueen of New Orleans – Redbone

Present throughout much of New Orleans’ culture is the African religion of Voodoo, first widely practiced in the area by Marie Laveau, a woman of Creole descent. Redbone’s tune ‘The Witchqueen of New Orleans’ tells Laveau’s story, which took place throughout most of the 1800s.

Early 1900s history is at play in ‘Axman Jazz (Don’t Scare Me Papa).’ The song’s title is about a series of murders in New Orleans from 1911 to 1919 that left the city fearful and on edge. Unfortunately, the murders were never solved, but speculation still continues, and the Ax murders are sometimes referenced in artistic works relating to New Orleans’ haunted history.

A number-one hit in America, Johnny Horton’s release of ‘The Battle of New Orleans’ chronicles one of the final conflicts between British and American troops during the war of 1812. Originally written by Jimmy Driftwood, a teacher and musician, the song talks about the British military’s failed attempts to capture New Orleans.

Take Me to the Mardi Gras – Paul Simon

Though this UK hit is about a freeing trip to New Orleans, Paul Simon recorded the fun track at the famous Muscle Shoals studios in Alabama. The song’s setting takes place at The Big Easy’s world-famous Mardi Gras Festival, where the protagonist can forget his troubles and dance the night away.

Not only did Louisiana musician Earl King release memorable tracks of his own such as ‘No City Like New Orleans,’ but the multi-talented lyricist and instrumentalist penned blues hits for legendary greats like Jimi Hendrix, Dr. John, and Stevie Ray Vaughn. His music, which deeply resonated with people who called the bayou home, was further cemented in Lousiana’s musical history by his epic, high-energy live performances.

Many listeners associate ‘Southern Nights’ with country artist Glen Campbell, who sent the song to number one on the charts with his release in 1977. It took a while for many to realize it wasn’t the country singer who wrote it but New Orleans-born-and-bred songwriter and musician Allen Toussaint. Toussaint had a storied career in his own right, penning many popular songs for other artists, releasing his own tracks, and hanging out at shows with popular deep south acts like The Meters.

Known internationally simply as “the Treme song,” listeners fell in love with the John Boutte track after hearing it play as the opening theme song to the popular HBO series Treme. The show follows the community of New Orleans rebuilding its beloved city after the devastation left behind by Hurricane Katrina. The series ran for four seasons.

Guitar pioneer Chuck Berry changed a lot of details in ‘Johnny B. Goode’ even though it was heavily autobiographical. The song follows his journey from a young boy learning to play guitar to the rock star he’d ultimately become. Though the song opens with “Deep down in Louisiana close to New Orleans” as a reference to where the protagonist is from, Berry himself was actually from St. Louis.

Related: Hear a cover of this tune on our list of Woodstock songs.

First released in 1922, ‘Way Down Yonder in New Orleans’ was written as a buck to the Tin Pan Alley trend of the times, which churned out tunes with the same general themes, making them sound “cliche” to writers John Turner Layton Jr. and Henry Creamer. Freddy Cannon’s 1959 brassed-up version became an early rock and roll favorite. Harry Connick Jr. performed a live version of the song for a fundraiser in 2005 helping victims of Hurricane Katrina.

“You’ll never know what heaven means until you’ve been down to New Orleans.” The King of Rock and Roll croons with ‘New-Orleans’ as he sings about why he loves the special city. He performed the tune in the 1958 film King Creole, based on the early ’50s novel A Stone for Danny Fisher.

“Get my coat, and I’ll catch the train. Make my way down to New Orleans.” A torrid love affair takes place with Roin Trowers’ ‘I Can’t Wait Much Longer.’ The protagonist is in agony with their lover as they beg them to choose them only or let them go. As the lover is still deciding, the protagonist tries to make their way to New Orleans for a respite from the pain.

Related: Check out our list of love affair songs.

An album by Louisiana artist Dr. John featuring several well-known artists, the track also titled ‘Goin’ Back to New Orleans’ features a collaboration with Joe Liggins. A celebratory song that finds the protagonist heading home to be with his lady, the entire album pays homage to the overflowing talent, both historical and contemporary, in the New Orleans area. The project won Best Traditional Blues Album at the Grammys after its 1992 release.