23 Best Songs About Not Giving Up and Persevering 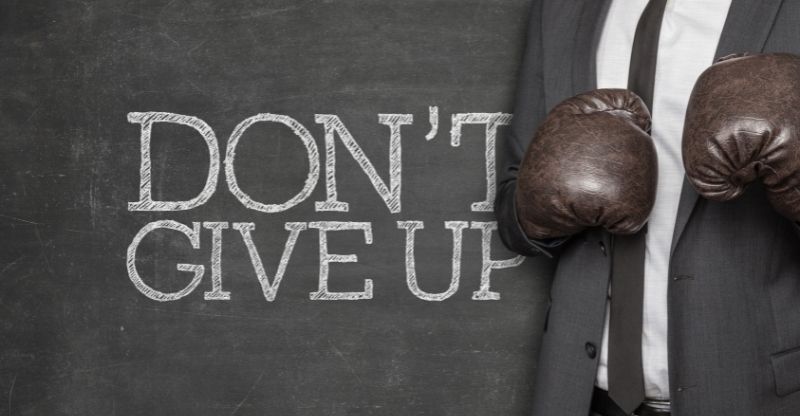 When things get hard, we’re all tempted to give up. It’s human nature.

But ask anyone who’s achieved success – whether that be in business, love, sport, or somewhere in between – and they’ll tell you that perseverance is everything. There’ll be times when you want to quit, but the key is to carry on regardless.

Sooner or later you’ll emerge out the other end, all the stronger for it.

Fortunately, songwriters know all about these struggles (it’s not easy making it as a musician) and have written loads of songs about not giving up. These songs will inspire you to keep going and do something remarkable. Good for you!

If there’s one song to pump you up and convince yourself ‘this ain’t over’, it’s this one. Tom Petty had real staying power, and kept making great records long after his peers had given up. Here, he demonstrates that fighting spirit we all need when the chips are down.

Do you know what helps with overcoming challenges? Great friendship. Heres, a song about the importance of love and friendship when times are tough.

Don’t Give Up – Peter Gabriel and Kate Bush

The moment when two pop stars of the ’80s came together was one to savor. In this gorgeous song, Bush consoles a downtrodden Gabriel and reminds him he can make it through.

It sometimes feels impossible to forget the past, but really what use is it if it drags you down. In this song, you’re reminded to spend more time thinking about tomorrow than yesterday. The minute you do that, everything changes. Try it.

It’s sometimes good to remind yourself what you’ve been through and how you got to where you are today. You might be having a bad day, but look at where you are right now. Things could have turned out much worse, right?

Here’s a song of encouragement for someone going through difficult times. It’s really a song about life’s disappointments. Wilson Phillips is a trio of singers from two famous musical families (The Beach Boys, and The Mamas and Papas.)

Don’t let anyone tell you you’re not good enough. You are.

When you read through the comments in the youtube thread for this song, it’s remarkable how many people’s lives this track has saved. “I will get by”, Jerry Garcia sings, but he speaks for all of us.

By the way, The Grateful Dead are one of music’s best-kept secrets. Once you get the bug, they’re hard to leave alone as the legions of Dead fans (known as ‘deadheads’) will tell you.

If there’s one song that’s guaranteed to gee up a crowd it’s this song. Getting knocked down is all part of the experience. Failure is our greatest teacher. Now get up and power through.

If you wanted a song to give you the courage to carry on, this song may do the trick. It’s a song about fighting for what you deserve and not letting anyone stand in your way.

I’ve got some news for you, are you sitting comfortably? You aren’t going to live forever. Fact. You may think you have bags of time left, but you haven’t. So it’s time to get executing that plan right now. You know that thing you said you’d get to some day. Start it today.

“The moment one definitely commits oneself, then providence moves too,” W.H Murray said that. That’s the message of this empowering song.

People give up on relationships all the time. But here’s another truth: when you weather the storm, the relationship is often much better. A little adversity often makes you a stronger couple. In this song, the narrator pleads with his girl not to give up.

We all love a good comeback story. It’s what keeps us going. The underdog comes back stronger, the awkward kid in the school playground becomes the next Bill Gates. There are countless examples. Here, Gokey sings about his comeback.

In this sweet song, Womack sings to her child about the life ahead of her.

Related: check out our playlist of songs about children

Here’s another song about overcoming obstacles and keeping going. That’s what you need to do if you want to win. Not letting doubt creep in (you know it will.)

Related: check out our playlist of songs about winners.

Confidence goes a long way. But here’s the thing, a lot of seemingly confident people are a nervous wreck on the inside. They play at looking confident. You can do that too (fake it till you make it), and before you know it, you’ll actually be confident (no faking required.)

If you want to succeed at anything, there’s always going to be an element of difficulty. Running a marathon, scaling a mountain, playing your first gig – it’s never going to be easy (if it was, everyone would do it….watching TV is easy, that’s why everyone does it.) This song encourages you to forget your fears and keep climbing.

Here’s a great song that reminds you tough times will always get better…eventually. Its one of lifes little contradictions…sometimes what you think is ‘bad news’ is actually a blessing. Accept the blows, and keep going. The sun will break through. It always does.

Related: check out our playlist of songs about life.

Christina Aguilera had a dysfunctional childhood and rarely felt safe. She used music from a young age as an escape chute, and it worked out for her. This empowering song is about forgiveness too – she’s not angry, it’s made her who she is today – it made her a fighter.

Believing in yourself, despite what others say, is key if you want to do well. Even the people closest to you with the best intentions get it wrong. The conviction you can succeed must first and foremost come from you, not your friend, parent, or partner. If you believe – and you keep going – good things will follow. Trust me.

Here’s a song about empowerment and overcoming adversity. When you unlock the tiger in you, the world will hear it (but you have to keep going and NOT give up.)

To add to this collection of empowering songs for the overlooked and underestimated, we have to mention this one. Alicia Keys grew in a single parent family in Hells Kitchen (a poor part of Manhatten) so knows all about overcoming adversity and moving forward in the competitive music industry. She did pretty well.

When You Believe – Mariah Carey and Whitney Houston

Sometimes a persons faith helps them get through difficult days. Here, these two pop divas remind you when you believe in God, miracles happen.

Titanium alloys are one of the strongest metals you can get, used for used in ships and spacecraft. In this song, the singers compare themselves to this bulletproof stuff. You can try shooting them down, but they won’t flinch.