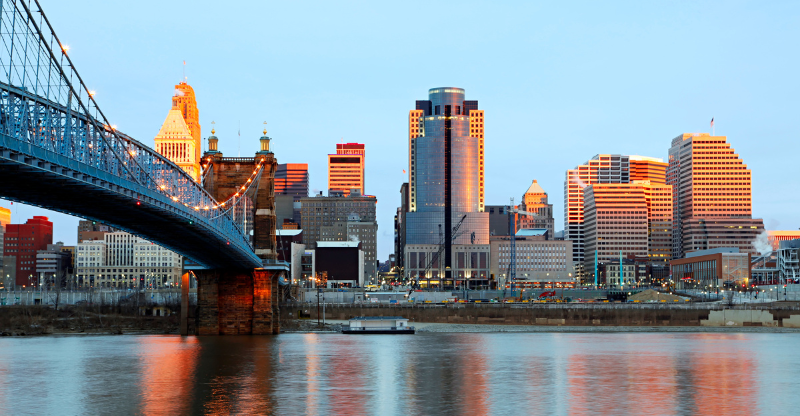 Did you know that Ohio is the seventh most-populated state in the United States? With a 2020 population of nearly 12 million, it is easy to see how Ohio would have some stories to share.

If you want to learn about the emotions and memories that Ohio provokes, look no further than the songs written about the state and its many towns and cities. Here are some of the best songs about Ohio to help you explore the state, no matter where you live.

This song recounts May 4, 1970 – the day that the US National Guard shot four students who were unarmed at Ohio’s Kent State University. Neil Young started writing the song after reading about the tragedy and seeing photos. The track was released only a month after the shooting occurred.

Related: Stand up for a cause with these songs about protesting.

‘Youngstown’ tells the tale of an unemployed steelworker in Youngstown, Ohio. The “sweet Jenny” in the song refers to the Jeanette blast furnace at Youngstown steelworks; it’s common for these blast furnaces to receive nicknames. The song reflects Bruce Springsteen’s tendency to write about working-class struggles.

Related: Are you working hard or hardly working? Check out these songs about jobs.

The narrator here seems to be looking back at an imperfect past that is greatly missed, and a past relationship may also be part of the protagonist’s discomfort. Ohio is also mentioned with a play on the state’s name with the lyric “Oh hi oh hi.”

While this sounds like a love or breakup song on the surface, it appears the narrator is actually talking about his hometown in Ohio. He remembers what it was like when he was young and wishes someone could restore it to its former glory, as he hasn’t been able to help it like he wanted to.

Related: These missing home songs will make you feel right at home.

This track explores the pain that arises when you can’t see someone you love. The protagonist has waited four days and nights and still hasn’t seen his special someone. Ohio has a role to play in this long-distance relationship, though it isn’t quite clear what that role is.

Related: Listen to the best songs about long distance.

Phil Ochs reflects on his childhood in Ohio with this piece. By the end of the song, Ochs realizes that none of the places he has been to as an adult hold the special place in his heart that his home state does.

Related: Remember the good days with these songs that bring back memories.

As the title suggests, this song is about a couple of dozen people planning an escape from Ohio. They hope to find fun and better times, but their plans are thwarted. A lot is going on in the song, but the main theme is the group’s dislike for Ohio.

Related: Plan a getaway with the best songs about escaping.

This song has become somewhat of a controversy among those who live in Toledo. The lyrics paint the city as questionable at best and dangerous at worst. The city’s highlights are also mentioned, but it’s hard to tell what is sarcasm and what is sincere.

My City Was Gone – The Pretenders

The Pretenders’ Chrissie Hynde was raised in Akron, the city that is the subject of this track. It’s a sad song about how her city and family back home in Ohio have disappeared over time.

Related: Have a minute to spare? Enjoy these songs with time in the lyrics.

Back Home – The Beach Boys

The protagonist of this Beach Boys track is excited to go back home to Ohio. He looks forward to seeing his family and his lifelong friends. Based on the lyrics, the narrator’s family home is on a farm, and he even looks forward to returning to farm work.

Related: Appreciate the farmers with these tractor songs.

Return to the Moon (Political Song for Didi Bloome to Sing, with Crescendo) – EL VY

This song talks about a breakup, but the rest of the lyrics are an abstract mix of geographical, animal, and Biblical references. The title refers to “Political Song for Michael Jackson to Sing” by the Minutemen.

The narrator of this track is reflecting on Cincinnati and seeks forgiveness from the city for some reason and believes it has already been given. The city’s charity and a typical day in Cincinnati life are also highlighted in the lyrics.

This story-rich song’s protagonist has a lover who left him for another man in Ohio. He hopes she enjoys herself but wants her to come back to him and Texas when she is tired of the new life she is pursuing.

Related: Check out these songs about someone you can’t have.

Damien Jurado sings of longing in this track—someone he knows longs for her hometown, and Jurado longs to be with her. She leaves at the end of the track, and Jurado realizes that she was never someone that was going to stay with him. Jurado collaborated with the Austrian music producer filous on the track.

Related: If you’re pining for someone, you’ll want to hear these songs about wanting love.

Matt Berninger, the lead singer of The National, moved to Brooklyn, New York, and drunkenly reminisces about his home state in this song. It’s also a song about being stuck between the old and new versions of yourself and how that feels while you are going through it.

Related: If you feel stuck, listen to the best songs about being locked in.

The narrator of this track misses Ohio. It seems that he feels alone and like an outsider whenever he is anywhere else. He wants to get back home before he loses his grip so he can relax and be himself for a while.

While the title of this song sounds like it’s about a beauty queen, it’s more of a placeholder for a general all-American girl. This girl is expected to live up to her hometown standards rather than be herself. According to the lyrics, she intends to live a little before cleaning up her reputation.

Somewhere in Ohio – The Jayhawks

This song finds its narrator talking to someone named Joe, who may be in trouble. The narrator is calling him from Ohio, as the lyrics state. Joe sounds desperate on the phone, but the narrator doesn’t know what to do, as Joe is breaking up due to poor reception.

Related: Ring, ring, ring! Here are some songs about calling on the phone.

Girl From Ohio – The Outlaws

The Outlaws founder Henry Paul wrote this song about a real-life girlfriend who moved to Ohio after graduating high school. It highlights what it is like to have that first emotional romance as a teenager in high school. Paul reconnected with his love interest as a result of the song!

Related: Listen to these sweet songs about reunited love.

In this song, a religious female character writes letters to a lost love that she will never send, as her pride prevents it. The male character she wants to reconnect with is lying drunk far away from her and will never see her words asking him to come back to her one day.

Look Out Cleveland – The Band

This track begins with a unique boogie-woogie blues piano riff. It warns the residents of Cleveland about a storm that is coming. Nothing can be done to avoid it other than to get out of its path. Whether the song refers to a real storm or a metaphorical one is unclear. The song appears to refer to Cleveland, Ohio, but it could reference Cleveland, Texas.

Modest Mouse explores some deep topics in this track, including the quest for redemption and the loss of meaning as a citizen of a fast-paced American society. It also tells the listener to let some things be rather than question them for years on end.

Hang on Sloopy – The McCoys

The Vibrations originally recorded this song as ‘My Girl Sloopy’ in 1964, when it charted in its own right. In the lyrics, the narrator is in love with a girl named Sloopy, even though she lives in the bad part of town and is criticized by others. This was named the official rock song of Ohio in 1985.

This song discusses the pollution of the Cuyahoga River, located in northern Ohio, and explores the devastation that pollution causes. It also criticizes the poor treatment of Native Americans in their home country throughout history.

Related: Feel connected to nature with these songs about the outdoors.

In Ohio on Some Steps – Limbeck

The narrator of this song sings about a memorable night in Dayton. He meets someone named Emily, who moved from Virginia. He spends a lot of time talking to her about where she came from and eventually finds himself on some steps after the night has ended.

Related: You’ll love our playlist of songs about talking too much.

Randy Newman attempted to evoke a feeling of a past time and place with this track, which isn’t based on any real knowledge he had of Dayton. The song looks back on this fictionalized past of Dayton as a place and time of innocence.

Banks of the Ohio – Olivia Newton-John

‘Banks of the Ohio’ dates back to the 1800s, with several notable artists performing it over the years. The song tells of a man who murders his girlfriend when she says she won’t marry him. Olivia Newton-John’s version charted in the US, the UK, and her home country of Australia.

The Ohio Players were a popular funk band in the 1970s. This song consists of the letters of Ohio spelled out and the state’s name as its only lyrics repeated throughout. The song hit three charts in the US and the UK, reaching Number Nine on the US R&B chart.

Related: Travel the US with these songs with a state in the title.

This anthem to the city of Cleveland was written in the 1970s by Englishman Ian Hunter. Drew Carey used it as the theme song for The Drew Carey Show; the Presidents of the United States of America performed that cover version. Hunter was eventually given the city key because of the popularity of this song in the city.

Hoopes I Did It Again – Relient K

This title is a play on Britney Spears’ ‘Oops…I Did It Again’ and Relient K’s guitarist Matt Hoopes. The song itself talks about the band’s hometown, Canton. The song states that the band needs to leave this hometown to make it and impact the world in a bigger way, even if the members are nervous about leaving the place they know.