14 Best Songs about Opportunity and Seizing the Moment 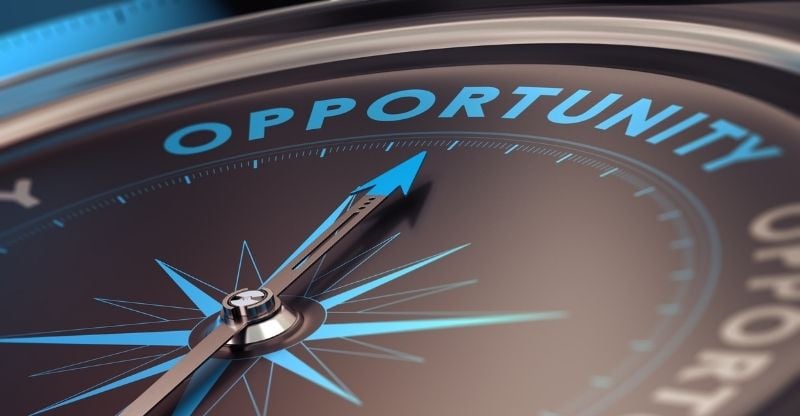 How many times have you kicked yourself for not taking that job, not saying hello to that cutie, or not jumping on that flash sale?

Life is full of opportunities, both good and bad, and juggling those decisions can be tricky! Some of these choices will change your life forever, while others leave you saying, “oh well.”

So, without further ado, here are some of the best songs about opportunity and seizing the moment ever written. Don’t miss out!

If you’ve got the brains and the brawn, it’s going to be easy to get rich, right? That’s at least what the Pet Shop Boys seem to be insinuating in this song. The singer lists out all of his qualifications, citing his education and programming abilities (which was really something in the 1980s).

Although the song seems to support seizing opportunities to get that cash, it’s actually a criticism of capitalism and Thatcherism that was popular in the ’80s. People don’t always get the satire of the song, so this song is sometimes ironically mistaken as a pro-capitalism song!

‘Lose Yourself’ was written about the fictional character Jimmy Smith Jr. (B-Rabbit), who Eminem played in the movie 8 Mile. The film is about a rapper who grew up in Detroit, and follows his struggles on the road to fame – it’s also loosely based on Eminem’s life.

The song is hugely motivating and creates a feeling of urgency by warning you that “you only get one shot” and that you have to believe in yourself if you want to succeed. The song tells you it’s now or never to take your chance and achieve your dreams!

Thousands are Sailing – The Pogues

The United States has often been called “the land of opportunity,” and this song is about Irish immigrants coming to the US to find a better life. Unfortunately, that’s not what they found when they arrived.

The island mentioned in the first verse is presumably Ellis Island, where immigrants would go to be processed before entering the country, and they frequently had their names changed there, whether it was by accident or because their names “weren’t American enough.”

According to the song, they still danced to the music – despite their poor treatment – because the country promised hope for better days.

Related: see our list of songs about hope for a better day.

Life’s What You Make It – Talk Talk

Only twenty-six different words are used in this song, but it says a lot! “Can’t escape it” suggests you have your life here on earth, and you can’t change that fact. “Nobody gets out of here alive,” to borrow a Jim Morrison line.

Fortunately, you can do what you want with your life. One could argue that life can be too difficult or has too many rules in place to actually do what you want, but this motivating song chooses to ignore that and urges you to take your life into your own hands.

Related: check out our list of songs about living your best life.

The song opens up with the singer standing on a stage in front of hundreds of people, and remembering how she used to dream of this moment. It’s not happening, and she realizes most people don’t get to have this chance to realize their dreams. This song does a great job of conjuring up a mental image of the setting, and an even better job at inspiring courage for those in similar situations.

The “heavy people” Kate Bush sings about in this song are the spiritual teachers in the world. She mentions a few of them, including Georges Ivanovich Gurdjieff, Jesus Christ, and the Dervishes. The song is about Kate wanting to learn everything there is to know about spirituality.

She talks about how she was “hiding in a room in [her] mind,” suggesting that she was once close-minded, but she eventually grew to accept all opportunities of learning new things that would allow her mind to be more open.

This song has a story behind it. Nick Javas is given an opportunity in the studio, but since he doesn’t have anything prepared, he has to come up with something on the spot. He raps about how you can’t turn down opportunities you’re given, or you’ll miss out.

He also spends some time rapping about how appreciative he is for having the opportunity since he’s a small rapper in a studio that was used by the greats. If anything, this song is a reminder to be grateful.

This version of ‘Opportunity’ is sung by Quvenzhané Wallis rather than Sia. Many people believe you have more opportunities in life when you’re a child, so hearing this song from a child’s perspective makes it feel even more hopeful than the original.

The child sounds hopeful and excited about her future and believes that she can go far in life. This song was in the 2014 version of the film Annie, and it’s a perfect fit since Little Orphan Annie has a tough life.

Britain had a lot of unemployment in the 1970s, and The Clash took it upon themselves to address the issues during those troubling times with ‘Career Opportunities.’

They criticized the people who thought being unemployed was shameful and the idea that any job was better than no job. “The ones that never knock” could either be referring to dream jobs that are hard to come by or the low-level jobs that everyone insists you get just so you’re not “shamefully” unemployed.

The song is an encouraging anthem for anyone who doesn’t work the typical 40-hour workweek.

In Sinatra’s ‘My Way,’ Old Blue Eyes takes on the persona as someone in their twilight years, reminiscing about their lives. He looks back at his life and says he lived the way he wanted. He took chances, seized opportunities, and yes, he made mistakes. But it doesn’t matter, because he did what he wanted to do. This end-of-life perspective may inspire you to go for it, so you can also say, “I did it my way.”

Related: this appears on our list of timeless karaoke classics.

Not every opportunity is about a job or experience. Sometimes your ‘missed opportunity’ is a person or relationship that goes awry.

In this song, the singer sadly sings about how he and his love interest keep getting it wrong. Maybe they’re never in love at the same time, or life just keeps getting in their way. Whatever it is, he still has a shred of hope that he clings onto that things might work out.

After getting your heart broken, you’re given an ‘Opportunity to Cry,’ according to Merle Haggard and Willie Nelson.

The lover clearly broke a promise and maybe even cheated, which has left poor Willie to say goodbye with sadness and anger. Saying goodbye will give him nightmares and cause him to cry long into the night. Not every opportunity is a good one, but you can still jump on the ones that will require you to use tissues.

The Jewels sing about a man who worked his life away. He was busy chasing opportunities and worked from dawn till dusk.

The song seems slightly conflicting since it says “a fool’s advice” is that “opportunity knocks once, not twice” in the second verse, but the third verse describes the man missing out on life because he worked all the time. Perhaps they’re singing about two different men, or they’re saying that every life should have balance.

The ‘Field of Opportunity’ appears to be a metaphor for finding a lover. Neil Young appears to have missed the opportunity to be with someone he was interested in and must now “cultivate more seeds,” that is to say, meet another woman since he missed his chance with the first one.

But later in his life, even after he’s found someone, he says he’ll still wonder where she is and won’t hesitate when he finds her again.