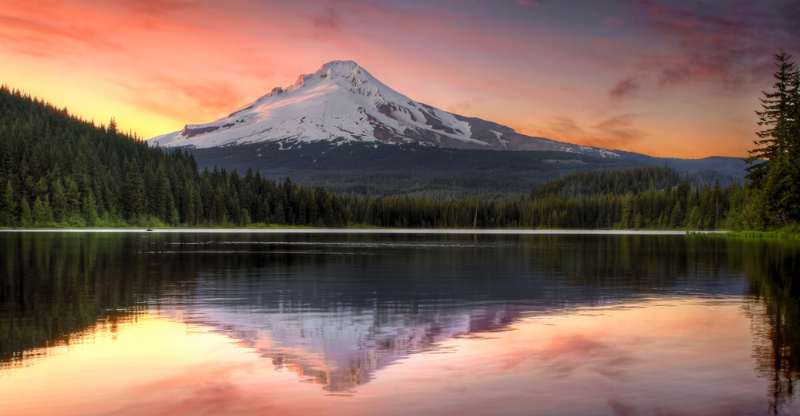 Oregon sits in the Pacific Northwest region of the US and is famous for its natural beauty spots like Mount Hood, Crater Lake, and Cannon Beach. Oregon’s capital city (Portland) is one of America’s most vibrant, with a thriving music and film scene with a slew of fine bands and musicians heralding from its shores (most notably the late great songwriter Elliott Smith).

Here’s a selection of some of the best songs about Oregon for you to explore.

Down by the Water – The Decemberists

This appeared on Oregan natives The Decemberists’ first Number One Billboard-charting album. The narrator spends time in nature and wishes for fulfillment, either spiritually or romantically. It seems that he wants something in his life to feel whole and like he has a greater purpose.

The narrator of this brilliant piece is asked to go “down to the Rose Parade.” He doesn’t want to partake in celebrations around him because he feels upset by the injustice and upsetting goings-on in society. He feels alone and abandoned because he can’t understand why everyone else cares about this flawed parade.

Related: Here are some more songs that include “rose” in the title.

Loretta Lynn duets with her producer Jack White here; the two won a 2005 Grammy Award for Best Country Collaboration. The song finds a couple meeting after drinking in Portland, Oregon, and falling in love while having fun together. Lynn manages to make a hip modern city sound like it is full of southern American charm.

Related: This appears on our list of songs about different US states.

This song’s protagonist is alienated and acting desperate as a result. He is negotiating with the police in the song after taking his desperate measures. He contemplates his fate after making poor choices.

So Long, Astoria – The Ataris

This title references Astoria, Oregon, the town from the film The Goonies. The narrator reminisces on his life in the lyrics. He realizes that his good and bad experiences all came together to make his life the special existence that it is. It reminds listeners that it can be nice to look back at your life and see how well it was lived.

The narrator here travels to Roseburg, Oregon. In the introduction, he explains that he went there with his father as a young boy to become a lumberjack. It talks about the hard work he goes through to become good at his job and the different ways that lumberjacks try to cope with their rugged lives.

Everyone Knows Everyone – The Helio Sequence

This song has a protagonist who lives somewhere where everyone knows everyone else and what they are up to. The weather also isn’t perfect, but it seems that he is happy here. He can’t escape but his friends are around and he decides he is happy staying in this town.

Shaw Mullins talks about meeting someone in Twin Rocks, Oregon, here. This man tells him about the adventures he has experienced and the places he has traveled to. Mullins tells him he has been traveling and looking for something in much the same way. The second man decides he might just dream the rest of his life away.

‘Doom Town’ introduces us to a narrator who seems to live somewhere unsettling and even haunting. Life is always the same there, the people give you blank stares, and life feels incomplete: “Nothing will ever change / Always stay the same.” Weak people have no chance of happiness here, as they will be taken advantage of, so you have to make morally questionable decisions to get by.

This track celebrates Oregon and its residents, new and old. The song spreads love and encourages listeners to visit Oregon to see what it’s all about and what changes the narrator and his friends are trying to make in the world.

Here we meet a narrator who is smitten with a girl from Oregon. She is different from everyone else he has met around the world. He hopes she will wait for him to graduate so they can get married; he will even buy lumber and build her a house. Nothing will stop him from being with her.

Illmaculate sings of negative changes that have occured in Portland, Oregon, here. People even think the inhabitants have lost their souls. The narrator explains that they can’t get away from the bad atmosphere. It’s his city and he is caught between criticizing and loving it.

Dolly Parton remembers performing in Eugene, Oregon with this track named after the location. She was sick when she got on stage, but the kind audience was very supportive and understanding. She was so moved that she wrote this song immediately after she left the stage, even though she still didn’t feel good.

Back to Oregon – Broadway Calls

The narrator here has traveled all around, presumably leaving his romantic partner behind. He now knows he wants to come back to Oregon to be with her. In the meantime, he is going to use his adventures to keep him occupied so he can forget about his loneliness while missing her.

‘Light Rail Coyote’ is a love song from Sleater Kinney to Portland, Oregon. The lyrics were inspired by a news story about a coyote that traveled on a light-rail transit system. The album the track appears on, One Beat, was the first of the band’s to be recorded in Portland.

Paul Westerberg apologized to the city of Portland for one of The Replacements’ worst shows with this track. The song was written during a hangover and was likely over-critical of the performance, though by all accounts the band did exhibit some sloppy and wild behavior on stage.

This appears on the album Radio Music Society, which won Esperanza Spalding a Grammy Award. The lyrics are a tribute to Portland, Oregon, known the “City of Roses”. Rapper Q-Tip helped produce the song and provides quiet vocals to make the track a duet. His singing an octave below the main vocals add to the track.

Mat Kearney sings about feeling alive even without money in this song. He apparently chased a dream like he was taught and has no regrets, but he is ready to go back home to Oregon, the “land of (his) first love.” He left his heart there and needs to go back to feel whole.

This song talks about rain in Portland, Oregon, and seems to subtly criticize the treatment of Native Americans by European settlers. It seems that the state causes the narrator to have contradictory feelings in a way: “The Portland water they swillin’ cold / And it swills my body but not not my soul.”

The narrator here sings about planning to travel the Oregon Trail soon. He and his love cannot live where they are anymore, so they have to try to find a new life in a land of promise. He knows that hard work may find them a new future in Oregon.