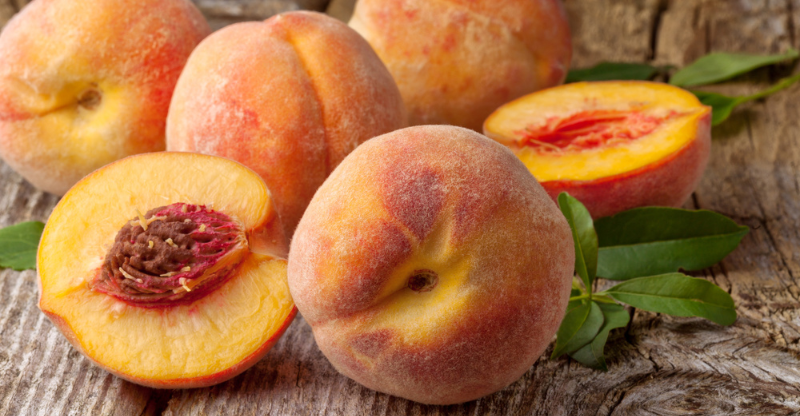 Who doesn’t love to eat a fresh peach or peach cobbler?

From their pleasant appearance to their sweet taste, peaches are one of the most appealing fruits on Earth. Several music artists would agree, based on the numerous peach songs they’ve released that either mention peaches or use them as a metaphor for another topic.

Keep reading to discover some peachy songs about peaches!

A man is “walking on the beaches looking at the peaches” in this song, where the many beautiful women present are the “peaches.” The album this appears on is Eat a Peach, and the band’s home state is Georgia, making the song’s title and reference to women as peaches very logical.

Related: Check out our playlist of beach songs.

This song celebrates all of the good and bad parts of life as one beautiful and challenging lived experience. It highlights the importance of embracing even the darkest times and emotions, as they are a good tradeoff for life’s happiest moments. It capitalizes on the most emotional times, whether they are positive or negative.

Related: You’re sure to feel something with these emotions songs.

Justin Bieber sings of deep romantic love and self-gratification in this track, which has a total of 11 songwriters. It’s mainly an R&B track that highlights the US states of California and Georgia within its lyrics. At least part of the song seems to be inspired by Bieber’s wife, Hailey.

Related: Head over to our list of California songs.

Peaches – The Presidents of the United States of America

This song is all about peaches—a rotten peach, eating peaches, a million of them! A homeless man inspired this song that the band’s lead singer Chris Ballew encountered. The man was overheard saying that he would move to the country and eat peaches, which became one of the song’s lyrics and its main, simple theme. The song’s end section has a distinct sound from its beginning and middle.

Rufus Wainwright reflects on a love that isn’t as happy as it once was and wonders what it means for the future of a relationship in this reflective track. Wainwright originally intended to write the song from a female protagonist’s perspective but switched to his own viewpoint instead with inspiration from his own experiences. He sings of waiting for his lover under a peach tree.

This rap track finds Snoop Dogg telling the tale of a woman he spots at a party and feels attracted to. Pharrell Williams provided the instrumental backings for this piece, while Charlie Wilson provided background vocals. Snoop Dogg performed this as a character on the television series Empire during the first season’s finale episode.

This somewhat abstract song seems to find Beck singing about a passionate and romantic situation, possibly with his girlfriend at the time. The “garbage man” references can be attributed to Beck’s past self-given nickname; he once called himself the garbage man because he turned “junk” into good music. The song plays on words in various verses.

Peach Picking Time Down in Georgia – Merle Haggard and the Strangers

Here’s a classic that Jimmie Rodgers originally performed in the early 1930s. Over 40 versions have been recorded since then. The lyrics mention various southern and southwestern US states, with the final verse finding the protagonist hoping to see the woman he loves soon. The song also compares picking peaches with getting picked on in life.

Related: Fuel your US road trip with these songs about states.

The protagonist of this Monkees track begs a woman to love him and be faithful to him like he is to her. He talks about bringing her multiple fruits as a metaphor for giving her everything she could want or need in life. This is the first track on The Monkees’ album Missing Tracks.

Related: Apples more your thing? Then check out this list of songs about apples!

Kevin Abstract reflects on a happy relationship that has ended in ‘Peach.’ He lets his love interest know they can be happy again if she is willing to work things out, which she doesn’t seem interested in. This track features Joba, Dominic Fike, and Bearface.

Peach Jam’ is a song with happy, positive summer vibes about a male narrator who is satisfied with a passionate lover and his relationship with her. This was released as part of 88rising’s collaborative project Head in the Clouds with features from Joji and BlocBoy JB. The track features several innuendos throughout.

Related: Enjoy the good vibes on our playlist of summer songs.

The narrator of the R&B hit ‘Peaches & Cream” can’t get enough of his passionate encounters with a lover. This candid track was a Billboard chart-topping hit that received a Grammy Award nomination and a well-known remix after its release.