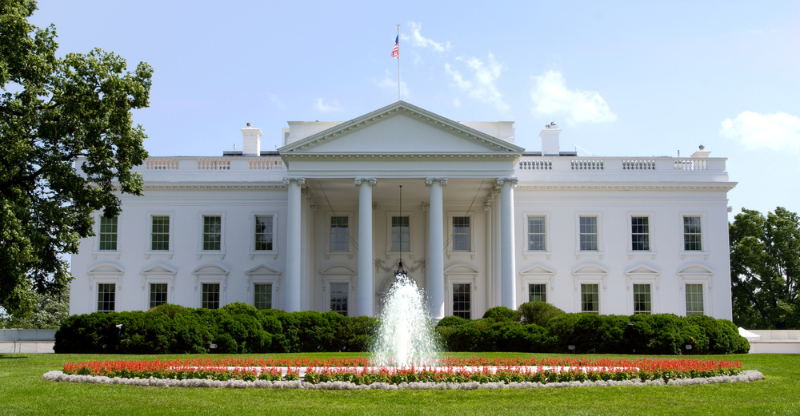 It might not be the topic some of us immediately think of when it comes to music, but there are a surprising number of songs about presidents of the United States that don’t come from the soundtracks of Hamilton or 1776.

Many songs are written and recorded by famous rock stars, pop groups, and solo artists. Take a journey through history through the music of Pink, Bob Dylan, The Ramones, Pearl Jam, and Ice Cube for an intriguing look at the world through political protests, laments, and more.

This song is a meditation on the assassination of President John F. Kennedy and how this event caused deep trauma on a national level. Part of the song’s impact was its release at the beginning stages of lockdowns in 2020. Although these two dark moments took place almost sixty years apart, Dylan finds a poignant link between the two. While a song alone can’t heal the world, it can help provide a common language to aid in grieving and starting the healing process.

Related: See our playlist of songs about tragedy.

Neil Young’s rage against injustice has almost always preceded national sentiment. Like his song ‘Southern Man’ was about the racism of Alabama, ‘Let’s Impeach the President’ is blunt in its demands to hold George W. Bush’s administration accountable. Neil makes a list that includes starting a war for profit, the civil liberties abused by The Patriot Act, the humanitarian disaster after Hurricane Katrina struck the Gulf Coast, and the rank hypocrisy of Bush using his religion to justify evil acts.

One of the greatest tragedies of America was the loss of President Lincoln. Losing such a strong leader right after the Civil War started a chain reaction that still haunts America today. Clutch’s song is a musical experience that captures the outrage of a good man being taken out by a racist coward. The lyrics point out that Booth’s act failed to erase the progress that Lincoln fought. Furthermore, no one sees Booth as a hero or martyr, just an assassin.

Related: Listen to the best songs about racial equality.

Stevie Wonder wrote this political song in reaction to the Richard Nixon administration. Watergate was obviously an inspiration, but so were all the false promises Nixon made regarding equality and making progress on Civil Rights issues. Another cause for this song was Nixon’s heavy-handed role in stirring up social unrest and the fallout caused by it. The song’s release date ended up being two days before Nixon resigned from the presidency in shame.

Public Enemy has been calling out racism and political hypocrisy since day one of being a band. While their messages have not always been without controversy, they have been consistent in their fight to use music for positive changes. This particular track was written in response to the 2020 elections and telling their listeners it’s not enough to be angry; they need to register and vote out politicians who have been causing destruction.

Related: Find the courage to speak your mind with these good fighting songs.

This song is a bit different from the typical Ramones song. This is from an era when their bass player, Dee Dee Ramone, played a more prominent role in writing and singing. Lyrically, the song responded to President Reagan visiting a German military cemetery and laying a wreath. The reason for this controversy was that almost fifty members of the Waffen-SS were buried in that specific cemetery. Reagan added fuel to the fire by describing the former Nazi officers as victims.

This song is a reaction to the George W. Bush administration and the hope of future President Barack Obama winning the (at the time) upcoming election. The song voices valid anger at racism and how many feel that few white presidents have ever made more than token efforts to secure black Americans’ civil rights. The lyrics also get into the difficulty for the poor to survive without crime and these crimes cause people to lose their ability to vote, creating a never-ending loop.

This late 90s Pearl Jam song is about how something as tragic as the assassination of President Kennedy loses meaning when it is exploited for political gain. As crucial as JFK’s presidency was in inspiring everyday Americans to pursue public service, that doesn’t mean people should follow blind patriotism. Critical thinking should always be used before we follow political leaders. The world can be better, but only when people act out of sincere conviction and not guilt or mere obligation.

He Was a Friend of Mine – The Byrds

This song was originally a traditional folk song written from the perspective of losing a close friend. In response to the assassination of President Kennedy, The Byrds took the melody and adapted the lyrics to fit the loss that America felt. The song readily conveys just how beloved this president was and that his loss was like losing more than a public leader. It was losing someone who had become a friend to the country.

Related: Check out our playlist of songs about friends.

James Brown wrote this song about President Gerald Ford, who succeeded Nixon after the former president resigned. This song attempts to see the bright side in a change of presidents. The Republicans may have still been in office, but many people felt the country was improving after getting rid of such an upsetting president. The optimism in the lyrics works great with James Brown’s funk style.

Related: Need to make a change? Here are some best songs about beginnings.

Johnny Horton represents a bygone era of country music. Today’s more pop-influenced country artists focus on singing about girls, parties, and trucks. Older country music was similar to folk music in that it documented the struggle of life and even acted as rallying cries against injustice. Horton’s song paints a historical narrative of Lincoln’s life that shows his extraordinary empathy towards all people involved in the Civil War.

The primary lyricist for Manic Street Preachers, Richey Edwards, lived a unique and challenging life. He gained notoriety early in his career for carving “4REAL” into his arm with a razor blade and then disappeared a while later. No one has seen him since. The band wrote this song to reflect Watergate, certainly, but more of “being tarnished with a certain part of your life forever.” Nixon was not just the president involved in Watergate, a “crook,” but also someone who did some good by de-escalating the arms race with the Soviet Union and other things that the band admired. The song is both a love song to those who’ve not been given a second chance and a love song to self in a reflective sort of way.

Alternative metal band Sum41 was significantly influenced by the punk movement in their musical beginnings. This punk influence carries over in their lyrics; they have not an ounce of fear in confronting topics that might be considered controversial. The anger of this song, ’45 (A Matter of Time)’, is directed at ex-president Trump, whom they refuse to acknowledge by name in the song. The lyrics also capture the uncertainty many people felt after Trump’s election victory.

They Might Be Giants is known for absurd humor and musical experimentation. The genesis of this song began with the band’s desire to write a song entirely based on factual events. Despite their stated goals, some minor errors were listed in the lyrics. Objectively, they paint a picture that is blunt about the evils committed under Polk. The band avoided saying Polk was evil despite feeling he was horrible. Their goal was to get the listener to hear the facts and decide for themselves.

This Prince song is from an influential album by Prince, Controversial. Sharing space with attention-grabbing songs might be why this politically focused song is often overlooked. The lyrics of this song are a literal plea for President Ronald Reagan to stop doing things intended to antagonize the USSR and to be willing to work together. There was a real fear of nuclear war, and Prince wanted the leaders to talk instead of fight.

Related: There are more songs about nuclear fear on our list of songs about the end of something.

This Ice Cube song is direct and in your face about politics. Although Trump is not mentioned by name in the lyrics, the song is a reaction to several years of his presidency. The video does not even try to be subtle because it is a montage of video clips about Trump. Ice Cube was inspired to write this song after feeling that Trump purposefully avoided issues that affected black citizens and that Trump was guilty of working with Russia to win the White House fraudulently.

While Elvis Costello later recorded the song, ‘Eisenhower Blues’ was written by and originally performed by J.B. Lenoir. The song is an anti-war protest song. The song practically expresses the anti-war sentiment, bringing up things most Americans can commiserate over: taxes. Lenoir was known as an activist, writing many songs to protest the people’s pains, including poverty, racism, and war, among others.

Related: Hear similar tunes on our playlist of the top political songs.

Mr. President (Have Pity on the Working Man) – Randy Newman

Randy Newman wrote ‘Mr. President (Have Pity on the Working Man)’ in 1974. The song was a track on the album “Good Old Boys,” which dealt with many topics we face today, including racism and poverty. The song calls the president, whoever they may be at the time, to attend with hard-hitting lyrics like, “Maybe you’re cheatin’. Maybe you’re lyin’. Maybe you have lost your mind. Maybe you only think about yourself.” The song was relevant then and remains so now, calling the Commander-in-Chief to fight for the rights of Americans, not put them down.

Related: This song features on our list of the best songs in Forrest Gump.

Written in collaboration with Billy Mann, Pink wrote ‘Dear Mr. President’ as an “open letter” to the president of the United States at the time, George W. Bush. Pink asks tough questions about the treatment of humans in the whole song’s foreground. Amy Ray and Emily Saliers of Indigo girls sing on the track with Pink, sharing the same political views with her. The song was released in Australia, Canada, and Europe, but never the US, as Pink didn’t want it to be seen as a publicity stunt.

Hail to the Chief – James Sanderson

Perhaps the most famous song about presidents of the United States is ‘Hail to the Chief.’ The song has been played for decades by the U.S. Marine Band, particularly when a new president is inaugurated. The song is performed hundreds of times each year for the Commander-in-Chief, but it didn’t originate as intended for this use. The song is actually attributed to English composer James Sanderson as part of a stage adaptation of Sir Walter’ Scott’s “The Lady of the Lake.” The song was first performed in the US in 1812, and its first performance in connection to a president was in 1829 when President John Quincy Adams attended the celebration for laying the cornerstone of the Chesapeake and Ohio Canal.

An odd commentary on the assassination of US President John F. Kennedy, ‘Bullet’ by The Misfits takes a dark look at the passing of the beloved man. The grown-ups-only song digs deep into the dark day in history with vivid overtones, revealing a side of the band most of their music never shows. Thanks to its intense nature, the band had difficulty finding a label to back the song, but ultimately found Plan 9 records of their own frontman Glenn Danzig willing. The cutting-edge lyrics didn’t keep this song from becoming a cult favorite as an allegory for hero worship in the United States and all the troubles therein.