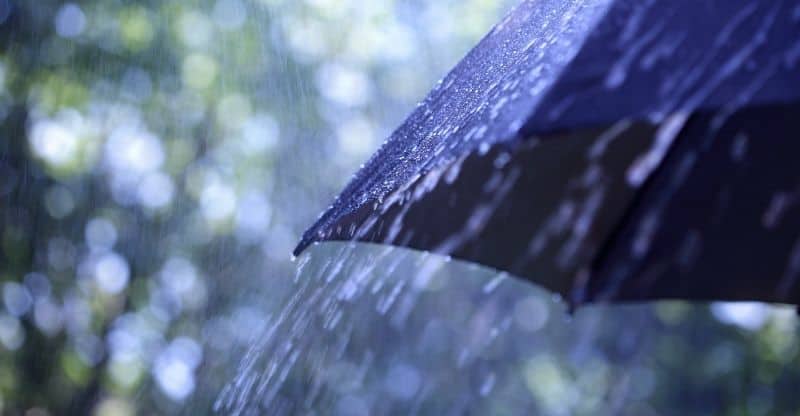 Pop music has a plethora of brilliant songs that use rain as a metaphor.

Many of the great songwriters have used it. For example, in Bob Dylan’s masterpiece, ‘A Hard Rain’s a-Gonna Fall.’ Or The Beatles’ experimental ‘Rain.’ Or Led Zep’s sublime ‘The Rain Song.’

Of course, like storms or clouds, rain is seldom used literally. Instead, it’s primarily used to denote hardship, bad times, or even suicide.

It’s not all doom and gloom, though – if you’re a weather girl, it’s sometimes “raining men” 🙂

So without further ado, grab your waterproofs and check out these songs about rain. There are some absolute gems here, by the way.

‘Have You Ever Seen the Rain?’ – Creedence Clearwater Revival

Bandleader John Fogerty’s brother Tom decided to leave the band at the height of their success. Hence the line “have you ever seen the rain, comin’ down on a sunny day?”

Tom’s imminent departure compelled John to pen this tune (what do they say about strife bringing out the best in us?) But, sadly, they never did manage to reconcile their differences before Tom died of Tuberculosis in 1990.

In the mood for some more Creedance? I don’t blame you. Try ‘Proud Mary’ (on our playlist of river songs) and ‘Bad Moon Rising’ (on our list of best moon songs.)

‘Rain’ originally appeared as the B-side to ‘Paperback Writer.’ Don’t let its humble beginnings fool you into thinking it’s a ‘filler song’ though, far from it.

It’s culturally important for a couple of reasons.

Firstly, it marked a change in the style of lyrics. This is the beginning of Lennon’s ‘trippy’ lyrics about reality and illusion (partly inspired by songs like Mr. Tamborine Man by Bob Dylan).

Secondly, it’s the first song to use a tape played backward (as we hear on that other classic of theirs, ‘Tomorrow Never Knows,’ featured on our dream songs playlist).

Ringo is also on record as saying this was his best drumming performance of the lot.

If the rain turns a red color, you know something’s wrong.

It’s not entirely obvious what Gabriel means by ‘red rain.’ In the ’80s, paranoia about nuclear war was rife, so it’s most likely that (or at least partly inspired by the fear of impending doom.)

Of course, with the fear of global pandemics and climate change these days, the song is as relevant today as it was back in the mid-’80s.

Unless we make some significant changes, more red rain is forecast.

Like many early Dylan compositions, it was partly inspired by an old American folk song (called ‘Lord Randall’) in which a parent asks her wandering son, “where have you been?”.

Similarly, Dylan’s narrator asks, “where have you been, my blue-eyed son?”. But the big difference: this is after a nuclear war. The Cuban Missile Crisis, with the world on a knife-edge, obviously played a part.

The ‘hard rain’ could be interpreted as ‘fallout rain,’ though Dylan has confirmed he didn’t mean atomic rain. “I just mean some sort of end that’s just gotta happen,” he said in an interview with Studs Terkel in 1963.

For another weather-themed Dylan track, check out ‘Shelter from The Storm’ on our songs about storms playlist.

This song is many people’s favorite Led Zep track. I can see why, too – it’s pretty perfect in many ways.

It packs a stunning vocal performance from Robert Plant (one of his best, by his own admission). A superb acoustic guitar performance from Jimmy Page (with a nod to George Harrison’s ‘Something’ in the opening notes). Top that off with some exquisite drums by Jon Bonham (who uses brushes throughout), and you have a simply gorgeous composition.

Then, of course, the lyrics and meaning of the song. They use the seasons as a metaphor for a love affair, with the acceptance by winter that “upon us all, a little rain must fall.”

From the second you hear that opening guitar chord, this song grabs you by the seat of your pants and forces you to listen.

No surprise that it’s one of the best karaoke songs ever then.

First appearing on Hendrix’s landmark album, Electric Ladyland, ‘Rainy Day, Dream Away’ was a stunning track. With its jazz shuffle and Hammond organ groove, it was light years ahead of its time.

This version here (with a funny short interview at the beginning) is excellent – just ignore the moving pictures; they’re a little out of sync.

For another Hendrix track that uses a weather metaphor, check out ‘Little Wing’ from our songs about clouds list.

Here’s the Chili Peppers with their own rain song, the catchy ‘The Adventures of Rain Dance Maggie.’

The video sees them rocking out on a roof in Venice Beach, California on a sunny afternoon; an idea inspired by The Beatles’ ‘Get Back’ rooftop video some fifty years earlier.

‘Dry The Rain’ – The Beta Band

You don’t need to be a multiple Grammy-winning band to write a good song about the rain. The Beta Band managed to do it on a shoestring budget.

“If there’s something inside that you wanna say, say it out loud it’ll be ok, I will be your light, I will be alright.”

‘I Wish It Would Rain’ – The Temptations

The writer and singer of this song, Roger Penzabene, caught his wife cheating on him. He was so torn up about it, he tragically took his own life a few days after the single’s release.

“A girl has found another and gone away, with her went my future, my life is filled with gloom.”

Here’s another gorgeous song that was born out of difficult times.

Bassist Phil Lesh’s father was dying, and Lesh wanted one last song to sing to him while he lay in the hospital bed. So he penned the music, and Dead lyricist Robert Hunter put the words to it.

Like most Grateful Dead songs, it’s full of mystery (“for this is all a dream we dreamed, one afternoon long ago”) with a sprinkle of wisdom (“such a long long time to be gone, and a short time to be there.”)

‘Singin’ In The Rain’ – Gene Kelly

No list of songs about rain is complete without ‘Singin’ In The Rain.’

Dating back to as early as 1929 (when it appeared in the movie Hollywood Revue), it has since taken on legendary status mainly thanks to Gene Kelly’s performance in the musical (of the same name) in 1952.

It also got an airing in Stanley Kubrick’s classic A Clockwork Orange (if you’ve seen the movie, you’ll know the scene I’m referring to.)

Another oldie but goodie written by Harold Arlen and Johnny Mercer for the musical St. Louis Woman in 1946.

Originally sung by Margaret Whiting, many others followed, including Ray Charles, Billie Holiday, and Frank Sinatra (who recorded multiple versions). Eric Clapton and blues legend B.B. King did their own version for their collaborative album Riding with the King (2000).

This Ray Charles’ version appears in the opening credits to Martin Scorcese’s classic The King of Comedy, with the brilliant Robert De Niro in fine form.

One of the classic ’90s love songs, this power ballad from GnR is based on a short story (called ‘Without You’) by horror writer Del James, a friend of lead singer Axel Rose.

The book is about (warning: spoiler alert) a rock star who cheats on his partner. She can’t bring herself to forgive him and tragically ends up taking her own life. This detail – understandably – isn’t depicted in the music video, but knowing it makes the funeral scene in the video make a ton more sense. It was his fault.

With wisdom beyond his years (he was only 20 when he wrote this,) James Taylor’s ‘Fire and Rain’ sings about the high and low points of his life.

“I’ve seen sunny days that I thought would never end,” he sings. But on the flip side, “I’ve seen lonely times when I could not find a friend.”

The main inspiration for the song was his friend Susanne, who’d tragically taken her own life.

We also include this track on another playlist worth checking out, songs about fire.

‘Rain on Me’ – Lady Gaga and Ariana Grande

This song is “two women having a conversation about how to keep going and how to be grateful for what you do,” Lady Gaga told Paper Magazine.

One thing for sure, it’s a total powerhouse of a tune and was awarded Best Song of 2020 by The Guardian newspaper, among other plaudits.

It’s important to remember that water has cleansing properties. Here, Ariana Grande asks for the rain to wash away her sins.

Note, rivers are also used as symbols of cleansing and purity, like in the song ‘Down to the River to Pray’ by Alison Krauss & Union Station (included on our best songs about rivers playlist.)

Burt Bacharach and Hal David wrote this uplifting song for the hit ’60s movie Butch Cassidy And The Sundance Kid with Paul Newman and Robert Redford.

The filmmakers first approached Bob Dylan (yes, Dylan!) to sing it, who declined. Finally, however, B.J. (short for ‘Billie Joe’) Thomas happily agreed to sing it and turned it into a runaway success.

‘Africa’ was written by Toto keyboard player David Paich, who was inspired to write it after seeing footage of the trouble in Africa on TV, despite never having been there.

Along with their other hit, ‘Rosanna,’ ‘Africa’ was a massive hit for Toto, a bunch of studio musicians who fancied a shot at the limelight.

And the reason for the inclusion on this playlist? This line: “I bless the rains down in Africa.”

Here, The King goes searching (“thumbing for a ride”) in the cold and rain for the woman who’s walked out on him.

It doesn’t sound too promising. He’s got “rain in my shoes,” and he goes from town to town looking for her, “up ahead’s another town that I’ll go walking through.”

We never get to find out if he finds her or not. I hope so. He’s the King, after all – he shouldn’t be getting drenched in the pouring rain!

‘I’ll Be There for You’ – The Rembrandts

The Rembrandts would have been committed to the annals of forgotten bands were it not for this pop song about friendship that was used as the theme tune for the insanely successful TV show Friends.

You can’t hear it without conjuring up an image of the gang (Joey, Phoebe, Chandler, Monica, Rachel, and Ross) goofing around on a sofa, with, er, umbrellas.

“I’ll be there for you, when the rain starts to fall,” the lyric goes.