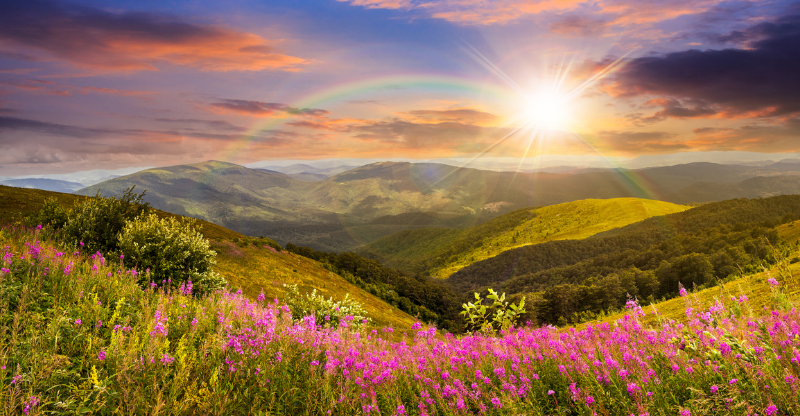 There’s nothing like a song about hope, vibrance, joy, and vivid color to help when you need a mood lift. In this case, the rainbow is our symbol of joy—and with it comes this list of amazing songs about rainbows. With songs by Miley Cyrus featuring Dolly Parton about diversity and joy, romantic moods by Elvis and the Rolling Stones, and hope from Judy Garland and Sia, the list is full of beauty and wonder we can all appreciate if we’ll just ‘Look to the Rainbow.’

As the song ‘Rainbow’ begins playing as the simple, beautiful piano tinkers, Kacey Musgraves’ sonorous voice pulls you into the lyrics of hope and sweet reflection in the middle of encouragement. Musgraves claims, “there’s always been a rainbow hanging over your head” in this song of acceptance, love, and support. It’s one of the best rainbow songs to soothe a hurting spirit when storm clouds rush in or you’re feeling low. This song is on her Golden Hour album.

Related: Lift yourself up with these songs about self-esteem.

Somewhere Over the Rainbow – Judy Garland

No list of rainbow songs could be complete without ‘Somewhere Over the Rainbow.’ Written for the 1939 musical film The Wizard of Oz, the stunning rendition by the irrepressible young Judy Garland is as lovely and evocative as the title implies. The bluebirds in the song are the simile for chasing dreams. The singer asks that if the bluebirds can fly past the rainbow, why can’t she? It’s the perfect song for your daydreaming moments or when you just need a little hope and joy infused into your day.

Related: This song appears on our playlist of optimistic songs.

She’s a Rainbow – The Rolling Stones

This psychedelic rock song from one of the most well-known rock bands of all time is a bright, perky listen, coming off their Satanic Majesties Request album from 1967. The strings arrangement was created by later Led Zep fame John Paul Jones. The recording process for this twinkling song was a total mess thanks to the ongoing personal challenges Mick Jagger and Keith Richards were facing. It was a roulette wheel of attendance during recording sessions – yet the song turned out stunningly vibrant and oddly whimsical and fun – a rumored tribute to the (now) late Anita Pallenberg.

Related: Find this song on our playlist of weather songs.

Sung by the King of Rock ‘n Roll himself, Pocketful of Rainbows offers a chill, melodic mood in true 1960 classic rock style. The sweet song sends off Mr. Heartache with sweet requests for extra tender kisses and tight embraces. “No more teardrops now that I’ve found a love so true…and an armful of you.” The song was on Elvis’s album G.I. Blues, written by Fred Wise, mostly known for co-writing ‘A, You’re Adorable’ and many tunes from the Elvis film scores in the future, and Ben Weisman, who wrote more than 50 songs sung by Elvis at some point.

Related: You may also recognize this from the Jerry Maguire soundtrack.

Australian singer/songwriter Sia lends her distinctly beautiful voice to singing ‘Rainbow,’ the rhythmic theme for the My Little Pony The Movie Soundtrack. The uplifting song, sung by her Pegasus pony character Songbird Serenade, raises hope through the struggles found in life. “I can see a rainbow In your tears as they fall on down. I can see your soul grow Through the pain as they hit the ground.” This pop hit reminds you that rainbows, in every form, are a sign of hope, a little joyous defiance, even on troubling days.

Using the natural sounds of rain falling and birds singing, Mariah Carey’s soft pop rendition of ‘Rainbow (Interlude)’ is a moment of hope for the ears. The artist recorded the song for her seventh album of the same name and immediately follows ‘Petals,’ a song about her challenging childhood and marriage. ‘Rainbow (Interlude)’ is brief but full of hope that something good will come at the rainbow’s end.

In true early 1960s style, ‘Sunshine, Lollipops and Rainbows’ gives a burst of energy and adorable assurance of a long bright future of romantic love. The hit song was released in 1963 as a single in conjunction with Lesley Gore’s album Lesley Gore Sings of Mixed-Up Hearts. The song peaked at #13 on the Billboard Hot 100. The single version released in 1965 has a faster speed than the original album version, playing at standard speed.

Related: See our playlist of the top romantic songs of all time.

Rainbowland is the chance to hear country-western legend Dolly Parton singing alongside her honorary goddaughter, Miley Cyrus. The upbeat country tune is about the home with a recording studio that Cyrus painted in all the rainbow colors and called by the song’s name. She says the rainbow shades represent the shades of humanity—the rainbow of humanity. Rainbowland is a place to celebrate diversity in all its colors.

Related: Check out these vivid songs about color.

After going to rehab for an eating disorder, Kesha wrote the song ‘Rainbow.’ The song is her mantra, a promise to herself to look for the rainbow at the end of the storms. The colors of the rainbow remain an essential image of hope for Kesha, and the song continues to represent the hope that better things are yet to come.

‘Red Green and Gold,’ sung by Burning Spear (Winston Rodney) and released in 1975, displays the singer’s Jamaican roots as a reggae singer and musician. The rhythmic lyrics play on repeat, delving into the Jamaican and African-rooted cultural imagery. The singer is known for his Rastafari movement messages. In this case, the song seems to be speaking of the end of life where we will meet “at the bank of the beautiful river” when the journey of life has ended, at the rainbow.

Look to the Rainbow – Kate Baldwin

This sweet song from the original score of Finian’s Rainbow, a Broadway-style musical, is all about the promise of what the rainbow holds: love, hope, and a song for the heart when things get tough. The intrepid singer reminds us that we should follow our dreams and find that delight and hope only where the rainbow leads.

Related: Head on over to our playlist of dreamy songs.